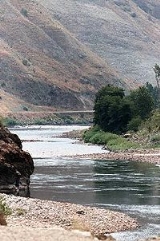 Ten miles (16 km) downstream (west) of its confluence with the Middle Fork, the Salmon River becomes the dividing line for the two time zones in Idaho: Mountain time
Mountain Time Zone
The Mountain Time Zone of North America keeps time by subtracting seven hours from Coordinated Universal Time, also known as Greenwich Mean Time, during the shortest days of autumn and winter , and by subtracting six hours during daylight saving time in the spring, summer, and early autumn...
to the south, Pacific time
Pacific Time Zone
The Pacific Time Zone observes standard time by subtracting eight hours from Coordinated Universal Time . The clock time in this zone is based on the mean solar time of the 120th meridian west of the Greenwich Observatory. During daylight saving time, its time offset is UTC-7.In the United States...
to the north, bisecting the state at approximately 45.5 degrees north latitude.

The Salmon River area has been home to people for at least the last 8,000 years. Much of the area was inhabited by several tribes, including the Nez Perce. The river was a rich source of food for the indigenous people of the area, who relied on the abundant salmon species and other wildlife.

In August 1805, just after crossing the continental divide
Continental divide
A continental divide is a drainage divide on a continent such that the drainage basin on one side of the divide feeds into one ocean or sea, and the basin on the other side either feeds into a different ocean or sea, or else is endorheic, not connected to the open sea...
, Lewis and Clark
Lewis and Clark Expedition
The Lewis and Clark Expedition, or ″Corps of Discovery Expedition" was the first transcontinental expedition to the Pacific Coast by the United States. Commissioned by President Thomas Jefferson and led by two Virginia-born veterans of Indian wars in the Ohio Valley, Meriwether Lewis and William...
ventured down the Salmon River, but found it to be too rough to be navigable. Clark wrote:


"...I shall in justice to Capt. Lewis who was the first white man ever on this fork of the Columbia Call this Louis's river. ...The Westerly fork of the Columbia River [the present Salmon River] is double the size of the Easterley fork [the present Lemhi River] & below those forks the river is ...100 yards [100 m] wide, it is very rapid & Sholey water Clear but little timber."

The honor didn't last long; by 1810 maps of the area were already referring to "Louis' River" as the Salmon. Clark had thought that the Salmon River was the Snake River, thus he called it the "Westerly fork of the Columbia". The Snake River retained the variant name "Lewis River" or "Lewis Fork" longer than did the Salmon.

In the 1860s, placer deposit
Placer deposit
In geology, a placer deposit or placer is an accumulation of valuable minerals formed by gravity separation during sedimentary processes. The name is from the Spanish word placer, meaning "alluvial sand". Placer mining is an important source of gold, and was the main technique used in the early...
s of gold
Gold
Gold is a chemical element with the symbol Au and an atomic number of 79. Gold is a dense, soft, shiny, malleable and ductile metal. Pure gold has a bright yellow color and luster traditionally considered attractive, which it maintains without oxidizing in air or water. Chemically, gold is a...
were found along the river, and a gold rush
Gold rush
A gold rush is a period of feverish migration of workers to an area that has had a dramatic discovery of gold. Major gold rushes took place in the 19th century in Australia, Brazil, Canada, South Africa, and the United States, while smaller gold rushes took place elsewhere.In the 19th and early...
began. Miners came to the area, causing clashes with the Nez Perce on their ancestral tribal lands. Many historic and present day mines (including dredging operations) can be seen while traveling along the river. 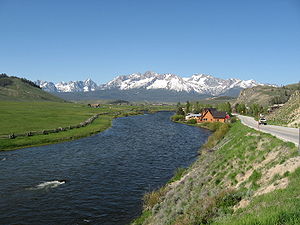 Several national forests and Sawtooth National Recreation Area
Sawtooth National Recreation Area
The Sawtooth National Recreation Area is a National Recreation Area located in central Idaho, within the Boise, Challis, and Sawtooth National Forests. The recreation area is managed by the U.S. Forest Service and includes the Sawtooth Wilderness...
provide for numerous recreation opportunities within the river's watershed. Two segments (the Middle Fork and a section of the main Salmon River) are protected as National Wild and Scenic River
National Wild and Scenic River
National Wild and Scenic River is a designation for certain protected areas in the United States.The National Wild and Scenic Rivers Act was an outgrowth of the recommendations of a Presidential commission, the Outdoor Recreation Resources Review Commission...
s. Today, the Salmon is a popular destination for whitewater kayaking
Whitewater kayaking
Whitewater kayaking is the sport of paddling a kayak on a moving body of water, typically a whitewater river. Whitewater kayaking can range from simple, carefree gently moving water, to demanding, dangerous whitewater. River rapids are graded like ski runs according to the difficulty, danger or...
, canoeing
Canoeing
Canoeing is an outdoor activity that involves a special kind of canoe.Open canoes may be 'poled' , sailed, 'lined and tracked' or even 'gunnel-bobbed'....
or rafting
Rafting
Rafting or white water rafting is a challenging recreational outdoor activity using an inflatable raft to navigate a river or other bodies of water. This is usually done on white water or different degrees of rough water, in order to thrill and excite the raft passengers. The development of this...
. The Middle Fork, more than 100 miles (160.9 km) long, travels through the Frank Church-River of No Return Wilderness Area. The South Fork flows through Payette National Forest
Payette National Forest
The Payette National Forest, is a U.S. National Forest located in central western Idaho, in parts of Valley, Idaho, Adams, and Washington counties. The land area consists of approximately 2.3 million acres of federally managed lands...
. The main fork raft trip run is slightly less than 100 miles (160.9 km) and ends south of White Bird, although the stretch of river is 125 miles (201.2 km). Single and multiple day trips on the river are available and offer beautiful views of wildlife and scenery. The river canyon allows for magnificent views of the complex geology
Geology
Geology is the science comprising the study of solid Earth, the rocks of which it is composed, and the processes by which it evolves. Geology gives insight into the history of the Earth, as it provides the primary evidence for plate tectonics, the evolutionary history of life, and past climates...
of the region. The Middle Fork of the Salmon River is known as one of the best catch and release
Catch and release
Catch and release is a practice within recreational fishing intended as a technique of conservation. After capture, the fish are unhooked and returned to the water before experiencing serious exhaustion or injury...
fly fisheries
Fly fishing
Fly fishing is an angling method in which an artificial 'fly' is used to catch fish. The fly is cast using a fly rod, reel, and specialized weighted line. Casting a nearly weightless fly or 'lure' requires casting techniques significantly different from other forms of casting...
in the nation.

Campgrounds along the river are available and offer stunning views of the river. Hiking
Hiking
Hiking is an outdoor activity which consists of walking in natural environments, often in mountainous or other scenic terrain. People often hike on hiking trails. It is such a popular activity that there are numerous hiking organizations worldwide. The health benefits of different types of hiking...
and mountain biking
Mountain biking
Mountain biking is a sport which consists of riding bicycles off-road, often over rough terrain, using specially adapted mountain bikes. Mountain bikes share similarities with other bikes, but incorporate features designed to enhance durability and performance in rough terrain.Mountain biking can...
are popular in the area. 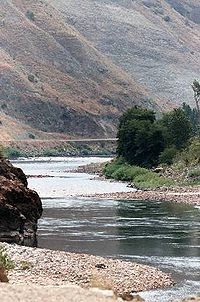 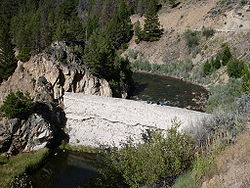 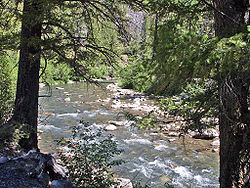 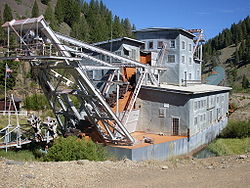 The Salmon River historically produced 45% percent of all the steelhead (salmon) and 45 percent of all the spring and summer chinook salmon in the entire Columbia River Basin. The Salmon River basin contains most (up to 70 percent) of the remaining salmon and steelhead habitat in the Columbia River Basin. Despite the abundant salmon habitat in the river, these fish have been declining, in large part because of the effects of four federal reservoirs and dams on the lower Snake and Columbia rivers.