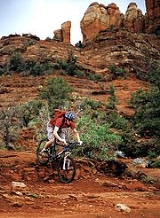 Encyclopedia
Mountain biking is a sport
Sport
A Sport is all forms of physical activity which, through casual or organised participation, aim to use, maintain or improve physical fitness and provide entertainment to participants. Sport may be competitive, where a winner or winners can be identified by objective means, and may require a degree...
which consists of riding bicycle
Bicycle
A bicycle, also known as a bike, pushbike or cycle, is a human-powered, pedal-driven, single-track vehicle, having two wheels attached to a frame, one behind the other. A person who rides a bicycle is called a cyclist, or bicyclist....
s off-road, often over rough terrain, using specially adapted mountain bikes. Mountain bikes share similarities with other bikes, but incorporate features designed to enhance durability and performance in rough terrain.

Mountain biking can generally be broken down into multiple categories: cross country
Cross-country cycling
Cross-country cycling is the most common discipline of mountain biking. While less publicized than downhill cycling as it is more difficult to televise, it garners the highest levels of participation both recreationally and competitively....
(XC), trail riding, all mountain, downhill
Downhill cycling
Downhill biking is a gravity-assisted time trial mountain biking event. Riders race against the clock, usually starting at intervals of 30 seconds , on courses which typically take two to five minutes to complete. Riders come from all around the world. Riders are timed with equipment similar to...
, freeride
Freeride
Freeride is a discipline of mountain biking closely related to downhill cycling and dirt jumping focused on tricks, style, and technical trail features. It is now recognized as one of the most popular disciplines within mountain biking....
, dirt jumping and trials. The vast majority of mountain biking falls into the recreational XC, and Trail Riding categories.

This individual sport requires endurance, core strength and balance, bike handling skills, and self-reliance. XC type mountain biking generally requires a different range of skills and a higher level of fitness than other types of mountain biking. Advanced riders pursue steep technical descents and, in the case of freeriding, downhilling, and dirt jumping, aerial maneuvers off of specially constructed jumps and ramps.

Mountain biking can be performed almost anywhere from a back yard to a gravel road, but the majority of mountain bikers ride off-road trails, whether country back roads, fire roads
Firebreak
A firebreak is a gap in vegetation or other combustible material that acts as a barrier to slow or stop the progress of a bushfire or wildfire. A firebreak may occur naturally where there is a lack of vegetation or "fuel", such as a river, lake or canyon...
, or singletrack
Single track (mountain biking)
Single track or singletrack is a narrow mountain biking trail that is approximately the width of the bike. It contrasts with double track or fire road which is wide enough for four-wheeled off-road vehicles...
(narrow trails that wind through forests, mountains, deserts, or fields). There are aspects of mountain biking that are more similar to trail running
Trail running
Trail running is a variant on running that differs markedly from road running and track running. Trail running generally takes place on hiking trails, most commonly single track trails, although fire roads are not uncommon. A distinguishing characteristic of the trails is that they are often...
than regular bicycling. Because riders are often far from civilization, there is a strong ethic of self-reliance in the sport. Riders learn to repair their broken bikes or flat tires to avoid being stranded miles from help. Many riders will carry a backpack, including a water bladder, containing all the essential tools and equipment for trailside repairs, and many riders also carry emergency supplies in the case of injury miles from outside help. Club rides and other forms of group rides are common, especially on longer treks. A combination sport named mountain bike orienteering
Mountain bike orienteering
Mountain bike orienteering is an orienteering endurance racing sport on a mountain bike where navigation is done along trails and tracks. Compared to foot orienteering, competitors usually are not permitted to leave the trail and track network. Navigation tactics are similar to ski-orienteering,...
adds the skill of map navigation to mountain biking.

The history of the mountain bike includes contributions from cyclo-cross
Cyclo-cross
Cyclo-cross is a form of bicycle racing. Races typically take place in the autumn and winter , and consists of many laps of a short course featuring pavement, wooded trails, grass, steep hills and...
in Europe, the Roughstuff Fellowship in the UK, and modified heavy cruiser bicycle
Cruiser bicycle
Cruiser bicycles, also known as beach cruisers, combine balloon tires, upright seating posture, single-speed drivetrains, and straightforward steel construction with expressive styling...
s used for freewheeling down mountain trails in Marin County, California
California
California is a state located on the West Coast of the United States. It is by far the most populous U.S. state, and the third-largest by land area...
. However, it was not until the late 1970s and early 1980s that road bicycle
Road bicycle
The term road bicycle is used to describe bicycles built for traveling at speed on paved roads. Some sources use the term to mean racing bicycle...
companies started to manufacture mountain bicycles using high-tech lightweight materials. Specialized
Specialized Bicycle Components
Specialized Bicycle Components, more commonly known simply as Specialized, is a major American brand of bicycles and related products. It was founded in 1974 by Mike Sinyard and is based in Morgan Hill, California-History:...
introduced the first major production mountain bike in the world, the Stumpjumper
Specialized Stumpjumper
The Specialized Stumpjumper is a mountain bike produced by Specialized Bicycle Components. When it was first produced in 1981, the Stumpjumper was the first mass-production mountain bike. The Stumpjumper is still in production, although its design has changed significantly since it was first sold...
, in 1981. Throughout the 1990s and 2000s, mountain biking moved from a little-known sport to a mainstream.

The style and level of protection worn by individual riders varies greatly and is affected by many factors including terrain, environment, weather, potential obstacles on the trail, experience, technical skill, fitness, perceived risk, desired style and others too numerous to mention. A cross-country helmet and simple long fingered gloves are a good minimum for the majority of riding.

Limb protection becomes important when speeds rise, surfaces become loose and sketchy, terrain technical and crashes more common and more severe. Full-face helmets and armored suits or jackets are more suited to "gravity" and "air"-orientated disciplines which use jumps and drops, where their extra bulk and weight is outweighed by the bigger and more frequent crashes with worse consequences. Still, within XC community, the typical road-racing attire is what most riders use. Whatever protection is used it should fit well, be comfortable (or it won't be worn) on the bike as well as in the shop and suited for the particular type of riding. Gloves can offer increased comfort while riding, by alleviating compression and friction, and protection in the event of strikes to the back or palm of the hand or when putting the hand out in a fall. Gloves also protect the hand, fingers, and knuckles from abrasion on rough surfaces such as concrete. Many different styles of gloves exist, with various fits, sizes, finger lengths, palm padding and armor options available. Armoring knuckles and the backs of hands with plastic panels is common in more extreme types of mountainbiking.

Mountain biking is dominated by these major categories: 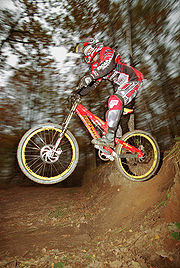 The risk of injury is inherent in the sport of mountain biking, especially in the more extreme disciplines such as downhill biking. Injuries range from relatively minor wounds, such as cuts and abrasions from falls on gravel to serious injuries such as striking the head or spine on a boulder or tree.

Protective equipment can protect against minor injuries, and reduce the extent or seriousness of major impacts, but it cannot protect a rider against the most serious impacts or accidents. To truly reduce the risk of injury, a rider needs to take steps to make injuries less likely, such as picking trails that they can handle given their experience level, ensuring that they are fit enough to deal with the trail they have chosen, and keeping their bike in top mechanical shape. If a mountain biker wishes to explore more dangerous trails or disciplines (types of mountain biking) such as downhill riding, they will need to learn new skills, such as jumping and avoiding obstacles.

Fitness is another issue; if a rider is not in good enough shape to ride a certain class of trail, they will become fatigued, which puts them at a higher risk of having an accident.

Lastly, maintenance of one's bike needs to be done more frequently for mountain biking than for casual commuter biking in the city. Mountain biking places much higher demands on every part of the bike. Jumps and impacts can crack the frame or damage the derailleurs or the tire rims, and steep, fast descents can quickly wear out brake pads. Thus, whereas a casual in-the-city rider may only check over and maintain their bike every few months, a mountain biker should check and properly maintain the bike before every ride. 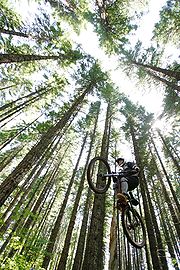 Opposition to the sport has led to the development of local, regional, and international mountain bike groups. The different groups that formed generally work to create new trails, maintain existing trails, and help existing trails that may have issues. Groups work with private and public entities from the individual landowner to city parks departments, on up through the state level at the DNR, and into the federal level. Different groups will work individually or together to achieve results.

Advocacy organizations work through a variety of means including education, trail work days, and trail patrols. Examples of the education an advocacy group can provide include: Educate local bicycle riders, property managers, and other user groups on the proper development of trails, and on the International Mountain Bicycling Association's
International Mountain Bicycling Association
The International Mountain Bicycling Association is a non-profit educational association whose mission is to create, enhance and preserve trail opportunities for mountain bikers worldwide....
rules of the Trail. Examples of trail work days can include: Flagging, cutting, and signing a new trail, or removing downed trees after a storm. A trail patrol is a bike rider who has had some training to help assist other (including non cyclists) trail users.

IMBA developed "Rules of the Trail" to promote responsible and courteous conduct on shared-use trails. 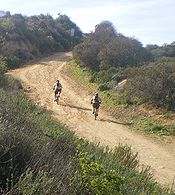 A critical literature review by Jason Lathrop http://www.wildlandscpr.org/ecological-impacts-mountain-biking-critical-literature-review on the ecological impacts of mountain biking notes that few studies take mountain biking into account.
He quotes the BLM: "An estimated 13.5 million mountain bicyclists visit public lands each year to enjoy the variety of trails. What was once a low use activity that was easy to manage has become more complex".

The environmental impacts of mountain biking can be greatly reduced by not riding on wet or sensitive trails, not skidding, and by staying on the trail.