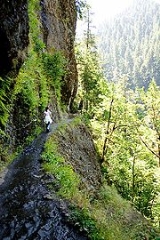 Overview
Hiking is an outdoor activity which consists of walking
Walking
Walking is one of the main gaits of locomotion among legged animals, and is typically slower than running and other gaits. Walking is defined by an 'inverted pendulum' gait in which the body vaults over the stiff limb or limbs with each step...
in natural environments
Natural environment
The natural environment encompasses all living and non-living things occurring naturally on Earth or some region thereof. It is an environment that encompasses the interaction of all living species....
, often in mountainous or other scenic terrain. People often hike on hiking trails
Trail
A trail is a path with a rough beaten or dirt/stone surface used for travel. Trails may be for use only by walkers and in some places are the main access route to remote settlements...
. It is such a popular activity that there are numerous hiking organizations worldwide. The health benefits of different types of hiking have been confirmed in studies. The word hiking is understood in all English-speaking countries, but there are differences in usage.
In the United States
United States
The United States of America is a federal constitutional republic comprising fifty states and a federal district...
and United Kingdom
United Kingdom
The United Kingdom of Great Britain and Northern IrelandIn the United Kingdom and Dependencies, other languages have been officially recognised as legitimate autochthonous languages under the European Charter for Regional or Minority Languages...
, hiking refers to walking outdoors on a trail for recreational purposes.