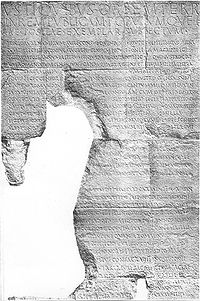 Res Gestae Divi Augusti, (Latin
Latin
Latin is an Italic language originally spoken in Latium and Ancient Rome. It, along with most European languages, is a descendant of the ancient Proto-Indo-European language. Although it is considered a dead language, a number of scholars and members of the Christian clergy speak it fluently, and...
: "The Deeds of the Divine Augustus") is the funerary inscription
Monumental inscription
A monumental inscription is an inscription, typically carved in stone, on a grave marker, cenotaph, memorial plaque, church monument or other memorial....
of the first Roman emperor
Roman Emperor
The Roman emperor was the ruler of the Roman State during the imperial period . The Romans had no single term for the office although at any given time, a given title was associated with the emperor...
, Augustus
Augustus
Augustus ;23 September 63 BC – 19 August AD 14) is considered the first emperor of the Roman Empire, which he ruled alone from 27 BC until his death in 14 AD.The dates of his rule are contemporary dates; Augustus lived under two calendars, the Roman Republican until 45 BC, and the Julian...
, giving a first-person record of his life and accomplishments. The Res Gestae is especially significant because it gives an insight into the image Augustus portrayed to the Roman people. Various inscriptions of the Res Gestae have been found scattered across the former Roman Empire. The inscription itself is a monument to the establishment of the Julio-Claudian dynasty that was to follow Augustus.


Structure of the text

The text consists of a short introduction, 35 body paragraphs, and a posthumous addendum. These paragraphs are conventionally grouped in four sections, political career, public benefactions, military accomplishments and a political statement.

The first part (paragraphs 2 – 14) is concerned with Augustus' political career, it records the offices and political honours that he held. Augustus also lists numerous offices he refused to take and privileges he refused to be awarded. The second part (paragraphs 15 – 24) lists Augustus' donations of money, land and grain to the citizens of Italy and his soldiers, as well as the public works and gladiatorial spectacles that he commissioned. The text is careful to point out that all this was paid for out of Augustus' own funds. The third part (paragraphs 25 – 33) describes his military deeds and how he established alliances with other nations during his reign. Finally the fourth part (paragraphs 34 – 35) consists of a statement of the Romans' approval for the reign and deeds of Augustus. The appendix is written in the third person, and likely not by Augustus himself. It summarizes the entire text, and lists various buildings he renovated or constructed; it states 600 million denarii(= 600,000 of gold) from his own funds were spent during his reign towards public projects. It is not possible to reliably convert ancient currencies into modern equivalents, but it is clearly more than anyone else in the Empire could afford. The annual expenses of the Roman State during the reign of Augustus are unknown, but modern authors estimate 200-300,000 pounds of annually (250-300 million denarii). 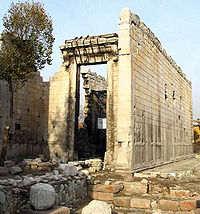 According to the text it was written just before Augustus' death in AD 14
14
Year 14 was a common year starting on Monday of the Julian calendar. At the time, it was known as the Year of the Consulship of Pompeius and Appuleius...
, but it was probably written years earlier and likely went through many revisions. Augustus left the text with his will, which instructed the Senate
Roman Senate
The Senate of the Roman Republic was a political institution in the ancient Roman Republic, however, it was not an elected body, but one whose members were appointed by the consuls, and later by the censors. After a magistrate served his term in office, it usually was followed with automatic...
to set up the inscriptions. The original, which has not survived, was engraved upon a pair of bronze pillars and placed in front of Augustus' mausoleum
Mausoleum of Augustus
The Mausoleum of Augustus is a large tomb built by the Roman Emperor Augustus in 28 BC on the Campus Martius in Rome, Italy. The Mausoleum, now located on the Piazza Augusto Imperatore, is no longer open to tourists, and the ravages of time and carelessness have stripped the ruins bare...
. Many copies of the text were made and carved in stone on monuments or temples throughout the Roman Empire
Roman Empire
The Roman Empire was the post-Republican period of the ancient Roman civilization, characterised by an autocratic form of government and large territorial holdings in Europe and around the Mediterranean....
, some of which have survived; most notably, almost a full copy, written in the original Latin
Latin
Latin is an Italic language originally spoken in Latium and Ancient Rome. It, along with most European languages, is a descendant of the ancient Proto-Indo-European language. Although it is considered a dead language, a number of scholars and members of the Christian clergy speak it fluently, and...
and a Greek
Greek language
Greek is an independent branch of the Indo-European family of languages. Native to the southern Balkans, it has the longest documented history of any Indo-European language, spanning 34 centuries of written records. Its writing system has been the Greek alphabet for the majority of its history;...
translation was preserved on a temple to Augustus in Ancyra (the Monumentum Ancyranum
Monumentum Ancyranum
The name Monumentum Ancyranum refers to the Temple of Augustus and Rome in Ancyra , or to the inscription Res Gestae Divi Augusti, a text recounting the deeds of the first Roman emperor Augustus, the most intact copy of which is preserved on the walls of this temple.The temple was built between 25...
of Ankara
Ankara
Ankara is the capital of Turkey and the country's second largest city after Istanbul. The city has a mean elevation of , and as of 2010 the metropolitan area in the entire Ankara Province had a population of 4.4 million....
, Turkey
Turkey
Turkey , known officially as the Republic of Turkey , is a Eurasian country located in Western Asia and in East Thrace in Southeastern Europe...
); others have been found at Apollonia
Sozopolis, Pisidia
Sozopolis in Pisidia, called Apollonia during Seleucid times, was an ancient town in the region of Pisidia, now in the Asian part of Turkey. It is not to be confused with the Thracian Sozopolis in present-day Bulgaria....
and Antioch
Antioch, Pisidia
Antioch in Pisidia – alternatively Antiochia in Pisidia or Pisidian Antioch and in Roman Empire, Latin: Antiochia Caesareia or Antiochia Caesaria – is a city in the Turkish Lakes Region, which is at the crossroads of the Mediterranean, Aegean and Central Anatolian regions, and formerly...
, both in Pisidia
Pisidia
Pisidia was a region of ancient Asia Minor located north of Lycia, and bordering Caria, Lydia, Phrygia and Pamphylia. It corresponds roughly to the modern-day province of Antalya in Turkey...
.

By its very nature the Res Gestae is less objective history and more propaganda
Propaganda
Propaganda is a form of communication that is aimed at influencing the attitude of a community toward some cause or position so as to benefit oneself or one's group....
for the principate
Principate
The Principate is the first period of the Roman Empire, extending from the beginning of the reign of Caesar Augustus to the Crisis of the Third Century, after which it was replaced with the Dominate. The Principate is characterized by a concerted effort on the part of the Emperors to preserve the...
that Augustus instituted. It tends to gloss over the events between the assassination
Assassination
To carry out an assassination is "to murder by a sudden and/or secret attack, often for political reasons." Alternatively, assassination may be defined as "the act of deliberately killing someone, especially a public figure, usually for hire or for political reasons."An assassination may be...
of Augustus' adoptive father Julius Caesar
Julius Caesar
Gaius Julius Caesar was a Roman general and statesman and a distinguished writer of Latin prose. He played a critical role in the gradual transformation of the Roman Republic into the Roman Empire....
and the victory at Actium
Battle of Actium
The Battle of Actium was the decisive confrontation of the Final War of the Roman Republic. It was fought between the forces of Octavian and the combined forces of Mark Antony and Cleopatra VII. The battle took place on 2 September 31 BC, on the Ionian Sea near the city of Actium, at the Roman...
when his foothold on power was finally undisputed. Caesar's murderers Brutus
Marcus Junius Brutus
Marcus Junius Brutus , often referred to as Brutus, was a politician of the late Roman Republic. After being adopted by his uncle he used the name Quintus Servilius Caepio Brutus, but eventually returned to using his original name...
and Cassius
Gaius Cassius Longinus
Gaius Cassius Longinus was a Roman senator, a leading instigator of the plot to kill Julius Caesar, and the brother in-law of Marcus Junius Brutus.-Early life:...
are not referred to by name, they are simply "those who killed my father." The Battle of Philippi
Battle of Philippi
The Battle of Philippi was the final battle in the Wars of the Second Triumvirate between the forces of Mark Antony and Octavian and the forces of Julius Caesar's assassins Marcus Junius Brutus and Gaius Cassius Longinus in 42 BC, at Philippi in Macedonia...
is mentioned only passim and not by name. Mark Antony
Mark Antony
Marcus Antonius , known in English as Mark Antony, was a Roman politician and general. As a military commander and administrator, he was an important supporter and loyal friend of his mother's cousin Julius Caesar...
and Sextus Pompeius
Sextus Pompeius
Sextus Pompeius Magnus Pius, in English Sextus Pompey , was a Roman general from the late Republic . He was the last focus of opposition to the Second Triumvirate...
, Augustus' opponents in the East, remain equally anonymous; the former is "he with whom I fought the war," while the latter is merely a "pirate." Likewise, the text fails to mention his imperium maius
Imperium
Imperium is a Latin word which, in a broad sense, translates roughly as 'power to command'. In ancient Rome, different kinds of power or authority were distinguished by different terms. Imperium, referred to the sovereignty of the state over the individual...
and his exceptional tribunicial powers. Often quoted is Augustus' official position on his government: "From that time (27 BC
27 BC
Year 27 BC was either a common year starting on Sunday, Monday or Tuesday or a leap year starting on Monday of the Julian calendar and a common year starting on Sunday of the Proleptic Julian calendar...
, the end of the civil war) I surpassed all others in influence, yet my official powers were no greater than those of my colleague in office." This is in keeping with a reign that promoted itself from the beginning as a "restoration" of the old republic, with a leader who was nothing more than "first among equals
Primus inter pares
Primus inter pares is Latin phrase describing the most senior person of a group sharing the same rank or office.When not used in reference to a specific title, it may indicate that the person so described is formally equal, but looked upon as an authority of special importance by their peers...
," but was virtually akin to absolute monarchy by divine right, backed by the swords of the legions
Roman legion
A Roman legion normally indicates the basic ancient Roman army unit recruited specifically from Roman citizens. The organization of legions varied greatly over time but they were typically composed of perhaps 5,000 soldiers, divided into maniples and later into "cohorts"...
.

The Res Gestae was a unique public relations move for the first emperor of the Roman Empire, whose political career was in many ways experimental. If their frequent use as "history" by later historians (both ancient and modern) who characterized Augustus' rule according to categories he himself constructed in the Res Gestae is any indication, it is a rather successful piece of propaganda. On the other hand, it would be absurd to overlook the usefulness to historians of what is essentially a first-person account of his rule.