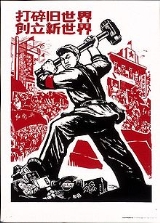 Overview
Propaganda is a form of communication that is aimed at influencing
Social influence
Social influence occurs when an individual's thoughts, feelings or actions are affected by other people. Social influence takes many forms and can be seen in conformity, socialization, peer pressure, obedience, leadership, persuasion, sales, and marketing...
the attitude of a community toward some cause or position so as to benefit oneself or one's group.

As opposed to impartially
Objectivity (journalism)
Parent article: Journalism ethics and standardsObjectivity is a significant principle of journalistic professionalism. Journalistic objectivity can refer to fairness, disinterestedness, factuality, and nonpartisanship, but most often encompasses all of these qualities.- Definitions :In the context...
providing information, propaganda, in its most basic sense, presents information primarily to influence an audience. Propaganda is often biased, with facts selectively presented (thus possibly lying by omission) to encourage a particular synthesis, or uses loaded messages to produce an emotional rather than rational response to the information presented.

PROPAGANDA: Patriotism as practiced by our enemies.

The conscious and intelligent manipulation of the organized habits and opinions of the masses is an important element in democratic society. Those who manipulate this unseen mechanism of society constitute an invisible government which is the true ruling power of our country.

Propaganda is the executive arm of the invisible government.

The engineering of consent is the very essence of the democratic process, the freedom to persuade and suggest.

The “Conqueror from Berlin,” as he has named himself, has completely conquered Germany. And not only that. Unfortunately, many, all too many Germans living abroad, also have fallen for the cunning propaganda.