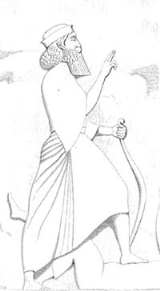 Overview
Darius I (550 – 486 BCE), also known as Darius the Great, was the third king of kings of the Achaemenid Empire. Darius held the empire at its peak, then including Egypt
History of Achaemenid Egypt
The history of Achaemenid Egypt is divided into two eras: an initial period of Achaemenid Persian occupation when Egypt became a satrapy, followed by an interval of independence; and a second period of occupation, again under the Achaemenids....
(Mudrâya), Balochistan
Balochistan
Balochistan or Baluchistan is a region which covers parts of Afghanistan, Iran and Pakistan. It can also refer to one of several modern and historical territories within that region:...
, Kurdistan and parts of Greece
Ancient Greece
Ancient Greece is a civilization belonging to a period of Greek history that lasted from the Archaic period of the 8th to 6th centuries BC to the end of antiquity. Immediately following this period was the beginning of the Early Middle Ages and the Byzantine era. Included in Ancient Greece is the...
.

Darius ascended the throne by overthrowing the alleged magus usurper of Bardiya
Bardiya
Bardiya was a son of Cyrus the Great and the younger brother of Cambyses II, both Persian kings. There are sharply divided views on his life, he may have ruled the Achaemenid Empire for a few months in 522 BCE, or he may have been impersonated by a magus called Gaumata. -Name and sources:The...
with the assistance of six other Persian noble families; Darius was crowned
Coronation
A coronation is a ceremony marking the formal investiture of a monarch and/or their consort with regal power, usually involving the placement of a crown upon their head and the presentation of other items of regalia...
the following morning.

I know that ruling a large empire was a difficult task. But how did Darius organize the administration of the realm? Would you like or dislike being a...
More
x