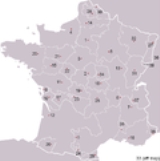 Encyclopedia
The Kingdom of France
Kingdom of France
The Kingdom of France was one of the most powerful states to exist in Europe during the second millennium.It originated from the Western portion of the Frankish empire, and consolidated significant power and influence over the next thousand years. Louis XIV, also known as the Sun King, developed a...
was organised into province
Province
A province is a territorial unit, almost always an administrative division, within a country or state.-Etymology:The English word "province" is attested since about 1330 and derives from the 13th-century Old French "province," which itself comes from the Latin word "provincia," which referred to...
s until March 4, 1790, when the establishment of the département system superseded provinces. The provinces of France were roughly equivalent to the historic counties of England
Historic counties of England
The historic counties of England are subdivisions of England established for administration by the Normans and in most cases based on earlier Anglo-Saxon kingdoms and shires...
. They came into their final form over the course of many hundreds of years, as many dozens of semi-independent fiefs and former independent countries came to be incorporated into the French royal domain. Because of the haphazard manner in which the provinces evolved, each had its own sets of feudal
Feudalism
Feudalism was a set of legal and military customs in medieval Europe that flourished between the 9th and 15th centuries, which, broadly defined, was a system for ordering society around relationships derived from the holding of land in exchange for service or labour.Although derived from the...
traditions, laws, taxation systems, courts, etc., and the system represented an impedement to effective administration of the entire country from Paris. During the early years of the French Revolution
French Revolution
The French Revolution , sometimes distinguished as the 'Great French Revolution' , was a period of radical social and political upheaval in France and Europe. The absolute monarchy that had ruled France for centuries collapsed in three years...
, in an attempt to centralize the administration of the whole country, and to remove the influence of the French nobility
French nobility
The French nobility was the privileged order of France in the Middle Ages and the Early Modern periods.In the political system of the Estates General, the nobility made up the Second Estate...
over the country, the entirety of the Province system was abolished and replaced by the system of départements, which is still in use today.

In some cases, several modern regions
Régions of France
France is divided into 27 administrative regions , 22 of which are in Metropolitan France, and five of which are overseas. Corsica is a territorial collectivity , but is considered a region in mainstream usage, and is even shown as such on the INSEE website...
or départements share names with the historic provinces, and their borders may cover roughly the same territory.

The list below shows the major provinces of France at the time of their dissolution during the French Revolution. Capital cities are shown in parentheses. Bold cities indicate that the city was the seat of a parlement
Parlement
Parlements were regional legislative bodies in Ancien Régime France.The political institutions of the Parlement in Ancien Régime France developed out of the previous council of the king, the Conseil du roi or curia regis, and consequently had ancient and customary rights of consultation and...
or conseils souverains (sovereign councils), which were legislative and judicial bodies. In some cases, the legislature met in a different city than the traditional capital. Some of the provinces that were later incorporated into France during the revolution were not formally part of the Kingdom of France.