Artois is a former province
Provinces of France
The Kingdom of France was organised into provinces until March 4, 1790, when the establishment of the département system superseded provinces. The provinces of France were roughly equivalent to the historic counties of England...
of northern France. Its territory has an area of around 4000 km² and a population of about one million. Its principal cities are Arras
Arras
Arras is the capital of the Pas-de-Calais department in northern France. The historic centre of the Artois region, its local speech is characterized as a Picard dialect...
(Dutch: Atrecht), Saint-Omer
Saint-Omer
Saint-Omer , a commune and sub-prefecture of the Pas-de-Calais department west-northwest of Lille on the railway to Calais. The town is named after Saint Audomar, who brought Christianity to the area....
, Lens
Lens, Pas-de-Calais
Lens is a commune in the Pas-de-Calais department in northern France. It is one of France's large Picarde cities along with Lille, Valenciennes, Amiens, Roubaix, Tourcoing, Arras, and Douai.-Metropolitan area:...
and Béthune
Béthune
Béthune is a city in northern France, sub-prefecture of the Pas-de-Calais department.-Geography:Béthune is located in the former province of Artois. It is situated South-East of Calais, West of Lille, and North of Paris.-Landmarks:...
. 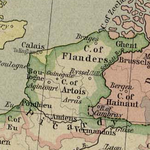 Originally a feudal county itself, Artois was annexed by the county of Flanders
County of Flanders
The County of Flanders was one of the territories constituting the Low Countries. The county existed from 862 to 1795. It was one of the original secular fiefs of France and for centuries was one of the most affluent regions in Europe....
. It came to France in 1180 as a dowry of a Flemish princess, Isabelle of Hainaut
Isabelle of Hainaut
Isabella of Hainault was queen consort of France as the first wife of King Philip II of France.- Early life :...
, and was again made a separate county
County of Artois
The County of Artois was an historic province of the Kingdom of France, held by the Dukes of Burgundy from 1384 until 1477/82, and a state of the Holy Roman Empire from 1493 until 1659....
in 1237 for Robert,
a grandson of Isabelle. Through inheritance, Artois came under the rule of the dukes of Burgundy in 1384. At the death of the fourth duke, Charles the Bold, Artois was inherited by the Habsburg
Habsburg
The House of Habsburg , also found as Hapsburg, and also known as House of Austria is one of the most important royal houses of Europe and is best known for being an origin of all of the formally elected Holy Roman Emperors between 1438 and 1740, as well as rulers of the Austrian Empire and...
s and passed to the dynasty's Spanish line. After the religious revolts of 1566 in the Netherlands, Artois briefly entered the Dutch Revolt
Dutch Revolt
The Dutch Revolt or the Revolt of the Netherlands This article adopts 1568 as the starting date of the war, as this was the year of the first battles between armies. However, since there is a long period of Protestant vs...
in 1576, participating in the Pacification of Ghent
Pacification of Ghent
The Pacification of Ghent, signed on November 8, 1576, was an alliance of the provinces of the Habsburg Netherlands for the purpose of driving mutinying Spanish mercenary troops from the country, and at the same time a peace treaty with the rebelling provinces Holland and Zeeland.-Background:In...
until it formed the Union of Atrecht
Union of Atrecht
The Union of Arras was an accord signed on 6 January 1579 in Arras , under which the southern states of the Netherlands, today in Wallonia and the Nord-Pas-de-Calais régions in France and Belgium, expressed their loyalty to the Spanish king Philip II and recognized his Governor-General, Don Juan...
in 1579. After the Union of Atrecht, Artois and Hainaut
County of Hainaut
The County of Hainaut was a historical region in the Low Countries with its capital at Mons . In English sources it is often given the archaic spelling Hainault....
(Dutch: Henegouwen) reached a separate agreement with Philip II
Philip II of Spain
Philip II was King of Spain, Portugal, Naples, Sicily, and, while married to Mary I, King of England and Ireland. He was lord of the Seventeen Provinces from 1556 until 1581, holding various titles for the individual territories such as duke or count....
. Artois remained with the Spanish Netherlands until it was conquered by the French during the Thirty Years War. The annexation was acknowledged during the Treaty of the Pyrenees
Treaty of the Pyrenees
The Treaty of the Pyrenees was signed to end the 1635 to 1659 war between France and Spain, a war that was initially a part of the wider Thirty Years' War. It was signed on Pheasant Island, a river island on the border between the two countries...
in 1659, and it became a French province. Though Artois had already been largely French-speaking, it was considered part of the Netherlands until the French annexation.

Artois experienced rapid industrial development during the second half of the 19th century, fueled by its rich coal resources. During World War I the front line between the opposing German and Allied
Entente Cordiale
The Entente Cordiale was a series of agreements signed on 8 April 1904 between the United Kingdom and the French Republic. Beyond the immediate concerns of colonial expansion addressed by the agreement, the signing of the Entente Cordiale marked the end of almost a millennium of intermittent...
armies in France ran through the province, resulting in enormous physical damage. Since the latter half of the 20th century Artois has suffered along with similar areas because of the decline of the coal industry.