Encyclopedia
Foix is a commune
Communes of France
The commune is the lowest level of administrative division in the French Republic. French communes are roughly equivalent to incorporated municipalities or villages in the United States or Gemeinden in Germany...
, the capital of the Ariège
Ariège
Ariège is a department in southwestern France named after the Ariège River.- History :Ariège is one of the original 83 departments created during the French Revolution on 4 March 1790. It was created from the counties of Foix and Couserans....
department in southwestern France. It is the least populous administrative centre of a department in all of France, although it is only very slightly smaller than Privas
Privas
Privas is a commune of France, capital of the Ardèche department. It is the second-smallest administrative center of any department in France, larger than only the commune of Foix. It is the fifth-largest commune in the Ardèche, behind Annonay, Aubenas, Guilherand-Granges, and Tournon-sur-Rhône. It...
. It lies south of Toulouse
Toulouse
Toulouse is a city in the Haute-Garonne department in southwestern FranceIt lies on the banks of the River Garonne, 590 km away from Paris and half-way between the Atlantic Ocean and the Mediterranean Sea...
, close to the border with Spain and Andorra
Andorra
Andorra , officially the Principality of Andorra , also called the Principality of the Valleys of Andorra, , is a small landlocked country in southwestern Europe, located in the eastern Pyrenees mountains and bordered by Spain and France. It is the sixth smallest nation in Europe having an area of...
. 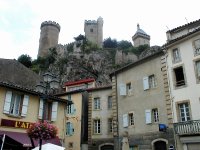 The town of Foix probably owes its origin to an oratory founded by Charlemagne
Charlemagne
Charlemagne was King of the Franks from 768 and Emperor of the Romans from 800 to his death in 814. He expanded the Frankish kingdom into an empire that incorporated much of Western and Central Europe. During his reign, he conquered Italy and was crowned by Pope Leo III on 25 December 800...
, which afterwards became the Abbey
Abbey
An abbey is a Catholic monastery or convent, under the authority of an Abbot or an Abbess, who serves as the spiritual father or mother of the community.The term can also refer to an establishment which has long ceased to function as an abbey,...
of Saint Volusianus in 849. The current area was preceded by the County of Foix
County of Foix
The County of Foix was an independent medieval fief in southern France, and later a province of France, whose territory corresponded roughly the eastern part of the modern département of Ariège ....
.