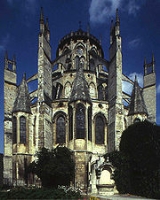 Encyclopedia
Bourges is a city in central France on the Yèvre
Yèvre
The Yèvre is a river in central France, right tributary of the river Cher. Its source is near the village Gron, east of Bourges. The Yèvre flows generally west through the following towns, all in the département Cher: Baugy, Avord, Saint-Germain-du-Puy, Bourges, Mehun-sur-Yèvre and Vierzon.The...
river. It is the capital of the department of Cher
Cher (département)
Cher is an administrative department located in the centre of France. It is named after the Cher River.-History:Cher is one of the original 83 departments created during the French Revolution on 4 March 1790. Most of it was created, along with the adjacent department of Indre from the former...
and also was the capital of the former province
Provinces of France
The Kingdom of France was organised into provinces until March 4, 1790, when the establishment of the département system superseded provinces. The provinces of France were roughly equivalent to the historic counties of England...
of Berry
Berry (province)
Berry is a region located in the center of France. It was a province of France until the provinces were replaced by départements on 4 March 1790....
.

The name of the city is either derived from the Bituriges
Bituriges
The Bituriges was a tribe with its capital at Bourges .Early in the 1st century BCE, they had been one of the main tribes, especially in terms of Druids and their political influence. But they soon declined in power as the Druids were an important target for Julius Caesar in his conquest of Gaul...
, the name of the original inhabitants, or from the Germanic Burg
Burg
Burg is the word for castle in various Germanic languages.Burg or Bürg or Buerg may refer to:*Burg bei Magdeburg, a city in Germany*Den Burg, a town in the Netherlands* Burg, former name of Melber, Kentucky...
(French: Bourg. Spanish: Burgos. English, others: Burgh
Burgh
A burgh was an autonomous corporate entity in Scotland and Northern England, usually a town. This type of administrative division existed from the 12th century, when King David I created the first royal burghs. Burgh status was broadly analogous to borough status, found in the rest of the United...
, Berg
Berg
Berg is the word for mountain in various Germanic languages, and may also refer to:-People:* Alban Berg , Austrian composer of the Second Viennese School.* Paul Berg Berg is the word for mountain in various Germanic languages, and may also refer to:-People:* Alban Berg (1885-1935), Austrian...
, or Borough
Borough
A borough is an administrative division in various countries. In principle, the term borough designates a self-governing township although, in practice, official use of the term varies widely....
), for "hill/village". Its Celt
Celt
The Celts were a diverse group of tribal societies in Iron Age and Roman-era Europe who spoke Celtic languages.The earliest archaeological culture commonly accepted as Celtic, or rather Proto-Celtic, was the central European Hallstatt culture , named for the rich grave finds in Hallstatt, Austria....
ic name was Avaricon and its Latin
Latin
Latin is an Italic language originally spoken in Latium and Ancient Rome. It, along with most European languages, is a descendant of the ancient Proto-Indo-European language. Although it is considered a dead language, a number of scholars and members of the Christian clergy speak it fluently, and...
name was Avaricum
Avaricum
Avaricum was an oppidum in ancient Gaul, near what is now the city of Bourges. Avaricum, situated in the lands of the Bituriges, was the largest and best-fortified town within their territory, situated on very fertile lands...
. In the Gallic Wars
Gallic Wars
The Gallic Wars were a series of military campaigns waged by the Roman proconsul Julius Caesar against several Gallic tribes. They lasted from 58 BC to 51 BC. The Gallic Wars culminated in the decisive Battle of Alesia in 52 BC, in which a complete Roman victory resulted in the expansion of the...
, the Gauls practised a scorched-earth policy, but the inhabitants of Avaricum begged not to have their city burned, and it was spared due to its good defences provided by the surrounding marshes and a strong southern wall. Following the siege of Avaricum in the winter of 52 BC, Julius Caesar
Julius Caesar
Gaius Julius Caesar was a Roman general and statesman and a distinguished writer of Latin prose. He played a critical role in the gradual transformation of the Roman Republic into the Roman Empire....
's forces destroyed the city and killed all but 800 of its inhabitants.

The city was reconstructed as a Roman city, with a monumental gate, aqueducts, thermae and an amphitheatre, reaching a greater size than it would attain during the Middle Ages. The massive walls surrounding the late Roman city, enclosing 40 hectares, were built in part re-using stone from earlier public buildings.

The third century Saint Ursinus
Ursinus of Bourges
Saint Ursinus of Bourges is venerated as a saint by the Catholic Church and is considered the first bishop of Bourges.Gregory of Tours' legendary account associated him with a Nathaniel, friend of Philip the Apostle, that he was present at the Last Supper, and read a lesson there...
, also known as Saint Ursin, is considered the first bishop of the city. Bourges is the seat of an archbishopric. During the 8th century Bourges lay on the northern fringes of the Duchy of Aquitaine and was therefore the first town to come under Frankish attacks when they crossed the Loire. It was captured by the Frankish Charles Martel
Charles Martel
Charles Martel , also known as Charles the Hammer, was a Frankish military and political leader, who served as Mayor of the Palace under the Merovingian kings and ruled de facto during an interregnum at the end of his life, using the title Duke and Prince of the Franks. In 739 he was offered the...
in 731 but immediately reconquered by the duke Odo the Great. It remained under the rule of counts who pledged allegiance to the Aquitanian dukes up to the destructive assault of Pepin the Short on independent Aquitaine starting in 762, when Basque
Duchy of Vasconia
The Duchy of Vasconia , or Wasconia, was originally a Frankish march formed by 602 to keep the Basques in check. It comprised the former Roman province of Novempopulania and, at least in some periods, also the lands south of the Pyrenees centred on Pamplona.In the ninth century, civil war within...
troops are found defending the town along with its count.

The Gothic
Gothic architecture
Gothic architecture is a style of architecture that flourished during the high and late medieval period. It evolved from Romanesque architecture and was succeeded by Renaissance architecture....
Cathedral of Saint Etienne
Cathédrale Saint-Étienne de Bourges
Bourges Cathedral is a Roman Catholic cathedral, dedicated to Saint Stephen, located in Bourges, France...
, begun at the end of the twelfth century, is listed as a World Heritage Site. It is considered the earliest example of the high gothic style of the thirteenth century.

During the Middle Ages
Middle Ages
The Middle Ages is a periodization of European history from the 5th century to the 15th century. The Middle Ages follows the fall of the Western Roman Empire in 476 and precedes the Early Modern Era. It is the middle period of a three-period division of Western history: Classic, Medieval and Modern...
, Bourges was the capital of a Viscount
Viscount
A viscount or viscountess is a member of the European nobility whose comital title ranks usually, as in the British peerage, above a baron, below an earl or a count .-Etymology:...
y until the fourteenth century. The future king, Charles VII
Charles VII of France
Charles VII , called the Victorious or the Well-Served , was King of France from 1422 to his death, though he was initially opposed by Henry VI of England, whose Regent, the Duke of Bedford, ruled much of France including the capital, Paris...
, sought refuge there. His son, Louis XI, was born there in 1423. In 1438, Charles decreed the Pragmatic Sanction of Bourges
Pragmatic Sanction of Bourges
The Pragmatic Sanction of Bourges, issued by King Charles VII of France, on July 7, 1438, required a General Church Council, with authority superior to that of the pope, to be held every ten years, required election rather than appointment to ecclesiastical offices, prohibited the pope from...
. During this period, Bourges was also a major capital of alchemy
Alchemy
Alchemy is an influential philosophical tradition whose early practitioners’ claims to profound powers were known from antiquity. The defining objectives of alchemy are varied; these include the creation of the fabled philosopher's stone possessing powers including the capability of turning base...
.

The city has a long tradition of art and history, other sites of importance include the Palace of Jacques Cœur
Jacques Cœur
Jacques Cœur , was a French merchant, one of the founders of the trade between France and the Levant.- Origins :He was born at Bourges, the city where his father, Pierre Cœur, was a rich merchant...
and a sixty-five-hectare district of half-timbered houses and fine town houses. 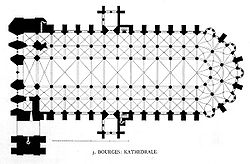 The railway station Gare de Bourges
Gare de Bourges
Gare de Bourges is a railway station serving the town Bourges, Cher department, central France.-Services:The following services currently call at Bourges:*intercity services Nantes - Tours - Bourges - Lyon...
offers direct connections to Paris, Orléans, Tours, Lyon and several regional destinations. The A71
A71 autoroute
The A71 autoroute is a motorway in central France. It is also called the l'Arverne. It starts at Orléans and ends at Clermont-Ferrand.-Orléans to Bourges:...
motorway connects Bourges with Orléans and Clermont-Ferrand. Bourges Airport
Bourges Airport
Bourges Airport is an airport serving Bourges, a commune in the Cher department of the Centre region of France. It is located southwest of Bourges.-Facilities:...
is a small regional airport.

Bourges is twinned
Town twinning
Twin towns and sister cities are two of many terms used to describe the cooperative agreements between towns, cities, and even counties in geographically and politically distinct areas to promote cultural and commercial ties.- Terminology :...
with:
Augsburg
Augsburg
Augsburg is a city in the south-west of Bavaria, Germany. It is a university town and home of the Regierungsbezirk Schwaben and the Bezirk Schwaben. Augsburg is an urban district and home to the institutions of the Landkreis Augsburg. It is, as of 2008, the third-largest city in Bavaria with a...
, Germany Aveiro, Portugal Forlì
Forlì
Forlì is a comune and city in Emilia-Romagna, Italy, and is the capital of the province of Forlì-Cesena. The city is situated along the Via Emilia, to the right of the Montone river, and is an important agricultural centre...
, Italy
Italy
Italy , officially the Italian Republic languages]] under the European Charter for Regional or Minority Languages. In each of these, Italy's official name is as follows:;;;;;;;;), is a unitary parliamentary republic in South-Central Europe. To the north it borders France, Switzerland, Austria and...
Koszalin
Koszalin
Koszalin ; is the largest city of Middle Pomerania in north-western Poland. It is located 12 km south of the Baltic Sea coast. Koszalin is also a county-status city and capital of Koszalin County of West Pomeranian Voivodeship since 1999...
, Poland Palencia
Palencia
Palencia is a city south of Tierra de Campos, in north-northwest Spain, the capital of the province of Palencia in the autonomous community of Castile-Leon...
, Spain Peterborough
Peterborough
Peterborough is a cathedral city and unitary authority area in the East of England, with an estimated population of in June 2007. For ceremonial purposes it is in the county of Cambridgeshire. Situated north of London, the city stands on the River Nene which flows into the North Sea...
, United Kingdom – Yoshkar-Ola
Yoshkar-Ola
Yoshkar-Ola is the capital city of the Mari El Republic, Russia. Population: Yoshkar-Ola means red city in Mari. The current name is the third to have been given to the city. The city was known as Tsaryovokokshaysk before 1919 and as Krasnokokshaysk between 1919 and 1927...
, Russia