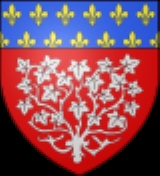 Overview
Amiens is a city and commune
Communes of France
The commune is the lowest level of administrative division in the French Republic. French communes are roughly equivalent to incorporated municipalities or villages in the United States or Gemeinden in Germany...
in northern France, 120 km (74.6 mi) north of Paris and 100 km (62.1 mi) south-west of Lille
Lille
Lille is a city in northern France . It is the principal city of the Lille Métropole, the fourth-largest metropolitan area in the country behind those of Paris, Lyon and Marseille. Lille is situated on the Deûle River, near France's border with Belgium...
. It is the capital of the Somme
Somme
Somme is a department of France, located in the north of the country and named after the Somme river. It is part of the Picardy region of France....
department in Picardy. The city had a population of 136,105 according to the 2006 census.
Originally called Samarobriva
Samarobriva
Samarobriva was the name of Amiens during the Gallo-Roman era.-Origin of the name:Its Gallo-Roman name was Samarobriva, meaning in the prior local language « Bridge on the Somme »....
("Somme bridge") by the Gauls, the town was later given the name Ambianum by the Romans
Ancient Rome
Ancient Rome was a thriving civilization that grew on the Italian Peninsula as early as the 8th century BC. Located along the Mediterranean Sea and centered on the city of Rome, it expanded to one of the largest empires in the ancient world....
as it was a settlement of the Gallic
Gaul
Gaul was a region of Western Europe during the Iron Age and Roman era, encompassing present day France, Luxembourg and Belgium, most of Switzerland, the western part of Northern Italy, as well as the parts of the Netherlands and Germany on the left bank of the Rhine. The Gauls were the speakers of...
Ambiani
Ambiani
The Ambiani were a Belgic people of Celtic language, who were said to be able to muster 10,000 armed men, in 57 BC, the year of Julius Caesar's Belgic campaign. They submitted to Caesar. Their country lay in the valley of the Samara ; and their chief town Samarobriva, afterwards called Ambiani and...
people.

Amiens in Roman Times: Did the Roman walls extend to both sides of the Somme or was the Roman fortification entirely on the south bank? Where can ...

Who was involved in the Amiens battle during World War 1?
More
x