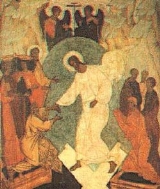 Overview
Easter is the central feast in the Christian
Christianity
Christianity is a monotheistic religion based on the life and teachings of Jesus as presented in canonical gospels and other New Testament writings...
liturgical year
Liturgical year
The liturgical year, also known as the church year, consists of the cycle of liturgical seasons in Christian churches which determines when feast days, including celebrations of saints, are to be observed, and which portions of Scripture are to be read. Distinct liturgical colours may appear in...
. According to the Canonical gospels, Jesus
Jesus
Jesus of Nazareth , commonly referred to as Jesus Christ or simply as Jesus or Christ, is the central figure of Christianity...
rose from the dead
Resurrection of Jesus
The Christian belief in the resurrection of Jesus states that Jesus returned to bodily life on the third day following his death by crucifixion. It is a key element of Christian faith and theology and part of the Nicene Creed: "On the third day he rose again in fulfillment of the Scriptures"...
on the third day
Third day in the Bible
-Introduction:The expression third day appears in several narratives in the Bible. Some biblical interpreters have thought that some of these third day motifs have significance by signifying a certain divine principle, and a few interpreters have thought that they are cryptic in meaning...
after his crucifixion
Crucifixion of Jesus
The crucifixion of Jesus and his ensuing death is an event that occurred during the 1st century AD. Jesus, who Christians believe is the Son of God as well as the Messiah, was arrested, tried, and sentenced by Pontius Pilate to be scourged, and finally executed on a cross...
. His resurrection is celebrated on Easter Day or Easter Sunday (also Resurrection Day or Resurrection Sunday). The chronology
Chronology of Jesus
The chronology of Jesus aims to establish a historical order for some of the events of the life of Jesus in the four canonical gospels. The Christian gospels were primarily written as theological documents rather than historical chronicles and their authors showed little interest in an absolute...
of his death and resurrection is variously interpreted to have occurred between AD 26 and 36.

Easter marks the end of Lent
Lent
In the Christian tradition, Lent is the period of the liturgical year from Ash Wednesday to Easter. The traditional purpose of Lent is the preparation of the believer – through prayer, repentance, almsgiving and self-denial – for the annual commemoration during Holy Week of the Death and...
, a forty-day period of fasting
Fasting
Fasting is primarily the act of willingly abstaining from some or all food, drink, or both, for a period of time. An absolute fast is normally defined as abstinence from all food and liquid for a defined period, usually a single day , or several days. Other fasts may be only partially restrictive,...
, prayer, and penance
Penance
Penance is repentance of sins as well as the proper name of the Roman Catholic, Orthodox Christian, and Anglican Sacrament of Penance and Reconciliation/Confession. It also plays a part in non-sacramental confession among Lutherans and other Protestants...
.