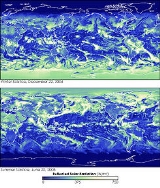 Overview
A solstice is an astronomical event that happens twice each year when the Sun
Sun
The Sun is the star at the center of the Solar System. It is almost perfectly spherical and consists of hot plasma interwoven with magnetic fields...
's apparent position in the sky, as viewed from Earth
Earth
Earth is the third planet from the Sun, and the densest and fifth-largest of the eight planets in the Solar System. It is also the largest of the Solar System's four terrestrial planets...
, reaches its northernmost or southernmost extremes. The name is derived from the Latin
Latin
Latin is an Italic language originally spoken in Latium and Ancient Rome. It, along with most European languages, is a descendant of the ancient Proto-Indo-European language. Although it is considered a dead language, a number of scholars and members of the Christian clergy speak it fluently, and...
sol (sun) and sistere (to stand still), because at the solstices, the Sun stands still in declination
Declination
In astronomy, declination is one of the two coordinates of the equatorial coordinate system, the other being either right ascension or hour angle. Declination in astronomy is comparable to geographic latitude, but projected onto the celestial sphere. Declination is measured in degrees north and...
; that is, the apparent movement of the Sun's path north or south comes to a stop before reversing direction.

The term solstice can also be used in a broader sense, as the date (day) when this occurs.

Where can I find a site that will give me the exact location on the horizion for sunrise at the solstices and equinoxes for any given latitude? mark t...
More
x