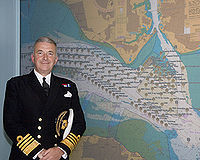 Trafalgar 200 was a series of events in 2005 held mostly in the United Kingdom
United Kingdom
The United Kingdom of Great Britain and Northern IrelandIn the United Kingdom and Dependencies, other languages have been officially recognised as legitimate autochthonous languages under the European Charter for Regional or Minority Languages...
to celebrate the 200th anniversary of the Battle of Trafalgar
Battle of Trafalgar
The Battle of Trafalgar was a sea battle fought between the British Royal Navy and the combined fleets of the French Navy and Spanish Navy, during the War of the Third Coalition of the Napoleonic Wars ....
, where a British
Royal Navy
The Royal Navy is the naval warfare service branch of the British Armed Forces. Founded in the 16th century, it is the oldest service branch and is known as the Senior Service...
fleet led by Admiral Nelson (who died in the battle) defeated a joint Franco-Spanish fleet during the Napoleonic Wars
Napoleonic Wars
The Napoleonic Wars were a series of wars declared against Napoleon's French Empire by opposing coalitions that ran from 1803 to 1815. As a continuation of the wars sparked by the French Revolution of 1789, they revolutionised European armies and played out on an unprecedented scale, mainly due to...
. During the summer of 2005 there was an International Fleet Review
International Fleet Review
For a full list of ships present, see List of ships present at International Fleet Review, 2005The International Fleet Review took place on 28 June 2005, as part of the Trafalgar 200 celebrations to commemorate the 200th year after the Battle of Trafalgar in 1805.- 2005 Review Line-up :During the...
, the first since 1977. Dinners and other commemorations focussed on Trafalgar Day
Trafalgar Day
Trafalgar Day is the celebration of the victory won by the Royal Navy, commanded by Vice-Admiral Horatio Nelson over the combined French and Spanish fleets at the Battle of Trafalgar on 21 October 1805. The formation of the Navy League in 1894 gave added impetus to the movement to recognise...
21 October at , Trafalgar Square
Trafalgar Square
Trafalgar Square is a public space and tourist attraction in central London, England, United Kingdom. At its centre is Nelson's Column, which is guarded by four lion statues at its base. There are a number of statues and sculptures in the square, with one plinth displaying changing pieces of...
(T Square 200
T Square 200
T Square 200 was the name given to the son et lumière event, held in Trafalgar Square on Sunday, October 23, 2005, to mark the bicentenary of the sea battle, the Battle of Trafalgar, fought between the British Royal Navy and the combined navies of France and Spain off Cape Trafalgar, Spain on 21...
) and other locations.
In an apparent effort to avoid giving offence, at the Fleet Review the fleets in the mock battle were called simply "Red" and "Blue". This originates from the military map convention in which enemy positions are marked in red, and friendly (or allied) positions in blue. The phrase "blue on blue
Blue On Blue
Blue on Blue is Leigh Nash's debut solo album. Nash began working on the album a year after Sixpence None the Richer disbanded. Produced by Pierre Marchand who is famous for his collaborations with Sarah McLachlan, the album consists of pop songs....
" refers to an attack on ones' own forces in a "friendly fire
Friendly fire
Friendly fire is inadvertent firing towards one's own or otherwise friendly forces while attempting to engage enemy forces, particularly where this results in injury or death. A death resulting from a negligent discharge is not considered friendly fire...
" encounter. Some have thought the colouring was with the intent as not to insult French guests, which would make it an issue of political correctness.

The Trafalgar 200 celebrations were perhaps most remembered for the International Fleet Review
International Fleet Review
For a full list of ships present, see List of ships present at International Fleet Review, 2005The International Fleet Review took place on 28 June 2005, as part of the Trafalgar 200 celebrations to commemorate the 200th year after the Battle of Trafalgar in 1805.- 2005 Review Line-up :During the...
, held in the Solent
Solent
The Solent is a strait separating the Isle of Wight from the mainland of England.The Solent is a major shipping route for passengers, freight and military vessels. It is an important recreational area for water sports, particularly yachting, hosting the Cowes Week sailing event annually...
in the presence of Queen Elizabeth II of the United Kingdom
Elizabeth II of the United Kingdom
Elizabeth II is the constitutional monarch of 16 sovereign states known as the Commonwealth realms: the United Kingdom, Canada, Australia, New Zealand, Jamaica, Barbados, the Bahamas, Grenada, Papua New Guinea, the Solomon Islands, Tuvalu, Saint Lucia, Saint Vincent and the Grenadines, Belize,...
. Planning this event was an enormous task, and Admiral Sir Alan West
Alan West, Baron West of Spithead
Admiral Alan William John West, Baron West of Spithead GCB DSC PC was, from June 2007 to May 2010, a Parliamentary Under-Secretary of State at the British Home Office with responsibility for Security and a Security Advisor to Prime Minister Gordon Brown...
, then First Sea Lord, is shown here with the official chart of anchorages for the International Fleet Review. 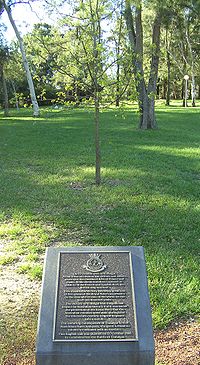