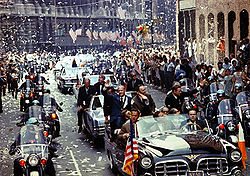 A ticker-tape parade is a parade
Parade
A parade is a procession of people, usually organized along a street, often in costume, and often accompanied by marching bands, floats or sometimes large balloons. Parades are held for a wide range of reasons, but are usually celebrations of some kind...
event held in a built-up urban setting, allowing large amounts of shredded paper to be thrown from nearby office buildings onto the parade route, creating a celebratory effect by the snowstorm-like flurry. The concept originates from the United States
United States
The United States of America is a federal constitutional republic comprising fifty states and a federal district...
and is most usually associated with that country, and especially New York City
New York City
New York is the most populous city in the United States and the center of the New York Metropolitan Area, one of the most populous metropolitan areas in the world. New York exerts a significant impact upon global commerce, finance, media, art, fashion, research, technology, education, and...
.

The term originated in New York City
New York City
New York is the most populous city in the United States and the center of the New York Metropolitan Area, one of the most populous metropolitan areas in the world. New York exerts a significant impact upon global commerce, finance, media, art, fashion, research, technology, education, and...
after a spontaneous celebration held on October 28, 1886 during the dedication of the Statue of Liberty
Statue of Liberty
The Statue of Liberty is a colossal neoclassical sculpture on Liberty Island in New York Harbor, designed by Frédéric Bartholdi and dedicated on October 28, 1886...
, and is still most closely associated with New York City. The term ticker-tape originally referred to the use of the paper output of ticker tape machine
Ticker tape
Ticker tape was the earliest digital electronic communications medium, transmitting stock price information over telegraph lines, in use between around 1870 through 1970...
s, which were remotely-driven devices used in brokerages to provide updated stock market quotes. Nowadays, the paper products are largely waste office paper that have been cut using conventional paper shredder
Paper shredder
A paper shredder is a mechanical device used to cut paper into chad, typically either strips or fine particles. Government organizations, businesses, and private individuals use shredders to destroy private, confidential, or otherwise sensitive documents...
s. The city also distributes paper confetti
Confetti
Confetti is a multitude of pieces of paper, mylar or metallic material which is usually thrown at parades and celebrations, especially weddings . Confetti is made in a variety of colors, and commercially available confetti is available in imaginative shapes...
.

Through the 1950s, ticker-tape parades were commonly given to any visiting head of state, such as Habib Bourguiba
Habib Bourguiba
Habib Bourguiba was a Tunisian statesman, the Founder and the first President of the Republic of Tunisia from July 25, 1957 until 7 November 1987...
representing the fight over colonialism. In the 1960s, following the assassination of John F. Kennedy
John F. Kennedy assassination
John Fitzgerald Kennedy, the thirty-fifth President of the United States, was assassinated at 12:30 p.m. Central Standard Time on Friday, November 22, 1963, in Dealey Plaza, Dallas, Texas...
, they became increasingly rare.

They are generally reserved now for space exploration triumphs, military honors and sports championships. The section of lower Broadway
Broadway (New York City)
Broadway is a prominent avenue in New York City, United States, which runs through the full length of the borough of Manhattan and continues northward through the Bronx borough before terminating in Westchester County, New York. It is the oldest north–south main thoroughfare in the city, dating to...
through the Financial District that serves as the parade route for these events is colloquially called the "Canyon of Heroes". Lower Broadway in New York City has plaques in the sidewalk at regular intervals to celebrate each of the city's ticker-tape parades.
The source of this article is wikipedia, the free encyclopedia.  The text of this article is licensed under the GFDL.