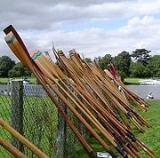 Overview
An oar is an implement used for water-borne propulsion
Marine propulsion
Marine propulsion is the mechanism or system used to generate thrust to move a ship or boat across water. While paddles and sails are still used on some smaller boats, most modern ships are propelled by mechanical systems consisting a motor or engine turning a propeller, or less frequently, in jet...
. Oars have a flat blade
Blade (disambiguation)
A blade is a sharp cutting part, for instance of a weapon or tool.Blade may also refer to:* Bladed weapon, especially a sword* Razor blade, used for shaving* Blade , a type of stone tool...
at one end. Oarsmen grasp the oar at the other end. The difference between oars and paddles are that paddles are held by the paddler, and are not connected with the vessel. Oars generally are connected to the vessel by means of rowlock
Rowlock
A rowlock or oarlock is a brace that attaches an oar to a boat. When a boat is rowed, the rowlock acts as a fulcrum, and, in doing so, the propulsive force that the rower exerts on the water with the oar is transferred to the boat by the thrust force exerted on the rowlock.On ordinary rowing...
s or tholes which transmit the applied force to the boat. In this system (known as a second class lever) the water is the fulcrum
Lever
In physics, a lever is a rigid object that is used with an appropriate fulcrum or pivot point to either multiply the mechanical force that can be applied to another object or resistance force , or multiply the distance and speed at which the opposite end of the rigid object travels.This leverage...
.

Oarsmen generally face the stern
Stern
The stern is the rear or aft-most part of a ship or boat, technically defined as the area built up over the sternpost, extending upwards from the counter rail to the taffrail. The stern lies opposite of the bow, the foremost part of a ship. Originally, the term only referred to the aft port section...
of the vessel, reach as far as they can towards the stern, and insert the blade of their oar in the water.

I have a design concept (for oars) which is rather simple but also quite unlike anything I have heard about. The paddle blade consists of many simple ...
More
x