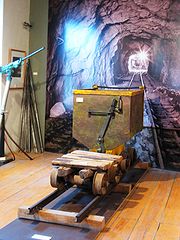 An ore is a type of rock
Rock (geology)
In geology, rock or stone is a naturally occurring solid aggregate of minerals and/or mineraloids.The Earth's outer solid layer, the lithosphere, is made of rock. In general rocks are of three types, namely, igneous, sedimentary, and metamorphic...
that contains minerals with important elements including metal
Metal
A metal , is an element, compound, or alloy that is a good conductor of both electricity and heat. Metals are usually malleable and shiny, that is they reflect most of incident light...
s. The ores are extracted through mining
Mining
Mining is the extraction of valuable minerals or other geological materials from the earth, from an ore body, vein or seam. The term also includes the removal of soil. Materials recovered by mining include base metals, precious metals, iron, uranium, coal, diamonds, limestone, oil shale, rock...
; these are then refined to extract the valuable element(s).

An ore deposit is an accumulation of ore. This is distinct from a mineral resource as defined by the mineral resource classification criteria. An ore deposit is one occurrence of the particular ore type. Most ore deposits are named according to either their location (for example, the Witswatersrand, South Africa), or after a discoverer (e.g. the kambalda
Kambalda type komatiitic nickel ore deposits
Kambalda type nickel ore deposits are a class of magmatic nickel-copper ore deposit in which the physical processes of komatiite volcanology serve to enrich, concentrate and deposit nickel-bearing sulfide within the lava flow environment of an erupting komatiite volcano.-Classification:The...
nickel shoots are named after drillers), or after some whimsy, an historical figure, a prominent person, something from mythology (phoenix, kraken, serepentleopard, etc.) or the code name of the resource company which found it (e.g. MKD-5 is the in-house name for the Mount Keith nickel ).

Ore deposits are classified according to various criteria developed via the study of economic geology, or ore genesis
Ore genesis
The various theories of ore genesis explain how the various types of mineral deposits form within the Earth's crust. Ore genesis theories are very dependent on the mineral or commodity....
. The classifications below are typical.

The basic extraction of ore deposits follows the steps below;

Ores (metals) are traded internationally and comprise a sizeable portion of international trade in raw materials both in value and volume. This is because the worldwide distribution of ores is unequal and dislocated from locations of peak demand and from smelting infrastructure.

Most base metals (copper, lead, zinc, nickel) are traded internationally on the London Metal Exchange
London Metal Exchange
The London Metal Exchange is the futures exchange with the world's largest market in options, and futures contracts on base and other metals. As the LME offers contracts with daily expiry dates of up to three months from trade date, along with longer-dated contracts up to 123 months, it also...
, with smaller stockpiles and metals exchanges monitored by the COMEX
Comex
Comex may refer to:*COMEX, a division of the New York Mercantile Exchange *COMEX , a French company in undersea engineering*COMEX, a gold trust owned by iShares...
and NYMEX exchanges in the United States and the Shanghai Futures Exchange in China.

Iron ore is traded between customer and producer, though various benchmark prices are set quarterly between the major mining conglomerates and the major consumers, and this sets the stage for smaller participants.

Other, lesser, commodities do not have international clearing houses and benchmark prices, with most prices negotiated between suppliers and customers one-on-one. This generally makes determining the price of ores of this nature opaque and difficult. Such metals include lithium
Lithium
Lithium is a soft, silver-white metal that belongs to the alkali metal group of chemical elements. It is represented by the symbol Li, and it has the atomic number 3. Under standard conditions it is the lightest metal and the least dense solid element. Like all alkali metals, lithium is highly...
, niobium
Niobium
Niobium or columbium , is a chemical element with the symbol Nb and atomic number 41. It's a soft, grey, ductile transition metal, which is often found in the pyrochlore mineral, the main commercial source for niobium, and columbite...
-tantalum
Tantalum
Tantalum is a chemical element with the symbol Ta and atomic number 73. Previously known as tantalium, the name comes from Tantalus, a character in Greek mythology. Tantalum is a rare, hard, blue-gray, lustrous transition metal that is highly corrosion resistant. It is part of the refractory...
, bismuth
Bismuth
Bismuth is a chemical element with symbol Bi and atomic number 83. Bismuth, a trivalent poor metal, chemically resembles arsenic and antimony. Elemental bismuth may occur naturally uncombined, although its sulfide and oxide form important commercial ores. The free element is 86% as dense as lead...
, antimony
Antimony
Antimony is a toxic chemical element with the symbol Sb and an atomic number of 51. A lustrous grey metalloid, it is found in nature mainly as the sulfide mineral stibnite...
and rare earths. Most of these commodities are also dominated by one or two major suppliers with >60% of the world's reserves. The London Metal Exchange aims to add uranium to its list of metals on warrant.

The World Bank
World Bank
The World Bank is an international financial institution that provides loans to developing countries for capital programmes.The World Bank's official goal is the reduction of poverty...
reports that China was the top importer of ores and metals in 2005 followed by the USA and Japan.