On July 6, 2000, a Presidential Decree "On the structure of the Armed Forces of the Republic of Kazakhstan" changed the structure: The Armed Forces returned to a dual structure (general-purpose forces and air defense forces). The Air Mobile Troops were created, the transition to the new military-territorial structure, established military districts, harmonized structure and deployment of troops. On August 7, Lieutenant-General A. B. Dzharbulov was appointed commander of the Southern Military District and Lieutenant-General E. Ertaev became commander of the Eastern Military District.

Today there are four regional commands: Regional Command Astana, Regional Command South at Taraz
Taraz
Taraz , is a city and a center of the Jambyl Province in Kazakhstan. It is located in the south of Kazakhstan, near the border with Kyrgyzstan, on the Talas River...
, Regional Command East at Semipalatinsk, Regional Command West at Aktobe
Aktobe
Aktobe , formerly known as Aktyubinsk , is a city on the Ilek River in Kazakhstan. With a population of 277,700, it is the capital of Aktobe Province. Aktobe has a mixed ethnic community, including Kazakhs, Russians, Ukrainians, Tatars, Uyghurs, Chechens, Armenians, Jews and Greeks...
, as well as the Air Defence Forces, the Air Mobile Troops with four brigades, and the Artillery and Missile Forces (formed as a separate branch on 7 May 2003).

On November 1, 1992, the First Army Corps was created in Kazakhstan, with its headquarters in Semipalatinsk. Later, at its base was established the Eastern Military District, retitled on 13 November 2003 as Regional Command East.

Immediately prior to its dissolution, the 32nd Army consisted of the 78th Tank Division (Ayaguz); the 5202nd Base for Storage of Weapons and Equipment (BKhVT) Semipalatinsk; the 5203rd BKhVT Ust-Kamenogorsk; and the 5204th BKhVT at Karaganda.

In the middle of the 1990s Kazakhstan's land forces included the 1st Army Corps (HQ Semipalatinsk), with the 68th Motor Rifle Division (Sary-Ozek
Sary-Ozek
Sary-Ozek may refer to one of the following, related to places in Kazakhstan.*Sary-Ozek station, a railway station*Sary-Ozek, Kazakhstan, a settlement*Sary-Ozek military range, witnessed demolition of Soviet ICBMs *Sary-Ozek...
, in Kyzylorda Province) – 2 motor-rifle and one tank regiment and the 78th Tank Division (Ayaguz
Ayaguz
Ayagoz or Ayakoz City of regional submission in Kazakhstan, administrative centre Ayagoz districts of the East Kazakhstan area. It's located in eastern Kazakhstan, till both parties of the proceeding river Ayagoz. The population is over 40,000 ....
). While the 68th Division was called a motor-rifle formation, in equipment terms it had almost 300 tanks and about 500 armoured fighting vehicles. The 78th Tank Division had 350 tanks, 290 armoured fighting vehicles and 150 artillery pieces. The 210th Separate Training Center (a former motor rifle training division) had 6,000 soldier and officers and 220 tanks and 220 artillery pieces, so was a strengthened division. (It was often called the Division of Guards by Kazakh sources). 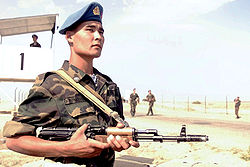 There are a number of special forces units reporting to various Kazakh security agencies which are not part of the Armed Forces. The National Security Committee of the Republic of Kazakhstan has the Arystan commando unit, KNS' Border Guards has a unit, the Police have units, and the Presidency is reported to have its own units also.

|-----
| Mikoyan MiG-25 || fighter || MiG-25 || 16 ||
|-----
| Mikoyan MiG-29
Mikoyan MiG-29
The Mikoyan MiG-29 is a fourth-generation jet fighter aircraft designed in the Soviet Union for an air superiority role. Developed in the 1970s by the Mikoyan design bureau, it entered service with the Soviet Air Force in 1983, and remains in use by the Russian Air Force as well as in many other...
|| fighter || MiG-29/-29UB || 15 ||
|-----
| Mikoyan MiG-31 Foxhound
Mikoyan MiG-31
The Mikoyan MiG-31 is a supersonic interceptor aircraft developed to replace the MiG-25 "Foxbat". The MiG-31 was designed by the Mikoyan design bureau based on the MiG-25.-Development:...
|| interceptor || MiG-31/-31B || 42 ||Ten aircraft to be refurbished by RSK MIG, Sept 2007.
|-----
| Sukhoi Su-27 Flanker
Sukhoi Su-27
The Sukhoi Su-27 is a twin-engine supermanoeuverable fighter aircraft designed by Sukhoi. It was intended as a direct competitor for the large United States fourth generation fighters, with range, heavy armament, sophisticated avionics and high manoeuvrability...
|| fighter || Su-27/-27UB || 47 ||
|-
! style="align: center; background: lavender;" colspan="7" | Ground-Attack Aircraft
Ground attack aircraft
Ground-attack aircraft are military aircraft with primary role of attacking targets on the ground with greater precision than bombers and prepared to face stronger low-level air defense...

|-----
| Mil Mi-24 Hind
Mil Mi-24
The Mil Mi-24 is a large helicopter gunship and attack helicopter and low-capacity troop transport with room for 8 passengers. It is produced by Mil Moscow Helicopter Plant and operated since 1972 by the Soviet Air Force, its successors, and by over thirty other nations.In NATO circles the export...
|| attack helicopter (Russian modernisation) || Mi-24P/-24V || 36 ||
|-
! style="align: center; background: lavender;" colspan="7" | Transport and Utility Helicopters
|-----
| Mil Mi-8 Hip
Mil Mi-8
The Mil Mi-8 is a medium twin-turbine transport helicopter that can also act as a gunship. The Mi-8 is the world's most-produced helicopter, and is used by over 50 countries. Russia is the largest operator of the Mi-8/Mi-17 helicopter....
|| transport helicopter || Mi-17/-17V-5 || 14 ||
|-----
| Mil Mi-26 Halo
Mil Mi-26
The Mil Mi-26 is a Soviet/Russian heavy transport helicopter. In service with civilian and military operators, it is the largest and most powerful helicopter ever to have gone into production.-Design and development:...
|| transport helicopter || Mi-26T/-26TZ || 22 ||
|-
Surface-to-Air Missile
Surface-to-air missile
A surface-to-air missile or ground-to-air missile is a missile designed to be launched from the ground to destroy aircraft or other missiles...
s include:

Kazakhstan maintains naval
Navy
A navy is the branch of a nation's armed forces principally designated for naval and amphibious warfare; namely, lake- or ocean-borne combat operations and related functions...
forces operating on the Caspian Sea
Caspian Sea
The Caspian Sea is the largest enclosed body of water on Earth by area, variously classed as the world's largest lake or a full-fledged sea. The sea has a surface area of and a volume of...
with a strength of 3,000, equipped with 12 inshore patrol craft; including 4 Almaty, 1 Dauntless, 5 Guardian, and 2 Zhuk class vessels.