Encyclopedia
The Antonov An-26 (NATO reporting name
NATO reporting name
NATO reporting names are classified code names for military equipment of the Eastern Bloc...
: Curl) is a twin-engined turboprop
Turboprop
A turboprop engine is a type of turbine engine which drives an aircraft propeller using a reduction gear.The gas turbine is designed specifically for this application, with almost all of its output being used to drive the propeller...
military transport aircraft
Military transport aircraft
Military transport aircraft are typically fixed and rotary wing cargo aircraft which are used to deliver troops, weapons and other military equipment by a variety of methods to any area of military operations around the surface of the planet, usually outside of the commercial flight routes in...
, designed and produced in the USSR from 12 March 1968.

After successful operations of the An-24T tactical transport in austere locations, interest in a version with a retractable cargo ramp increased. Initial studies for the retractable ramp were carried out as part of the projected An-40 medium transport. When given the go-ahead for the An-26 in March 1968 the Antonov OKB adapted the ramp design of the An-40 to the An-24 fuselage, thus was born the An-26. Particular attention was given to the military mission and the majority of early An-26 production was delivered to the VT-A.

Using the majority of the An-24 airframe, with its high-set cantilevered wings, twin turboprops and stalky main undercarriage, the An-26 included military equipment, such as tip-up paratroop canvas seats, overhead traveling hoist, bulged observation windows and parachute static line attachment cables. The An-26 made its public debut at the 27th Paris Air Show
Paris Air Show
The Paris Air Show is the world's oldest and largest air show. Established in 1909, it is currently held every odd year at Le Bourget Airport in north Paris, France...
at Le Bourget
Le Bourget
Le Bourget is a commune in the northeastern suburbs of Paris, France. It is located from the center of Paris.A very small part of Le Bourget airport lies on the territory of the commune of Le Bourget, which nonetheless gave its name to the airport. Most of the airport lies on the territory of the...
where the second prototype, CCCP-26184 (c/n00202), was shown in the static aircraft park.

The An-26 is also manufactured without a license agreement in China by Xian Aircraft Factory as the Y-14, later changed to be included in the Xian Y7 series.

Convertible passenger/cargo aircraft modified from 'An-26' aircraft at the Kiev plant from 1999.

An-26 Nel'mo An arctic surveillance and reconnaissance aircraft retrofitted with the Nel'mo equipment.

An-26 Pogoda, for the Ukrainian Air Force.

A one-off Assault transport prototype with higher performance due to removal of some military equipment.

An-26ASLK : A modern flight control and monitoring system equipped with automatic calibration and navigation system. Recognizable by the distinctive pod low on the forward fuselage side.

A civil cargo version equipped with roller gangs which can be swung up against the cabin walls when not in use. It was also equipped with two ZMDB Progress (Ivchyenko) Al-24VT turboprop
Turboprop
A turboprop engine is a type of turbine engine which drives an aircraft propeller using a reduction gear.The gas turbine is designed specifically for this application, with almost all of its output being used to drive the propeller...
power plants to deliver higher trust.

An-26B Tsiklon A weather research/control and cloud-seeding aircraft for the Central Aerologic Laboratory. This aircraft was used for rain induction and protection using cloud-seeding chemicals dropped from slab sided pods hung from pylons.

Convertible passenger/cargo aircraft modified from 'An-26B' aircraft at the Kiev plant from 1999.

Alternative designation for the 'An-26L'.

Alternative designation of the 'An-26RL' Arctic surveillance and reconnaissance aircraft.

An-26D An extended range version with extra fuel in wing tanks and additional external tanks attached to the airframe of the fuselage. One aircraft ('21 Yellow', c/n 13806) was retrofitted and delivered, but no further orders were forthcoming.

An-26K Kaira A single An-26 aircraft converted to a Kaira test airframe for the development of airborne LASER
Laser
A laser is a device that emits light through a process of optical amplification based on the stimulated emission of photons. The term "laser" originated as an acronym for Light Amplification by Stimulated Emission of Radiation...
guided systems.

An-26K Kaplya After completion of the LASER
Laser
A laser is a device that emits light through a process of optical amplification based on the stimulated emission of photons. The term "laser" originated as an acronym for Light Amplification by Stimulated Emission of Radiation...
designator trials the 'An-26K Kaira' was retrofitted to search or optically guided weapons as the navigation systems. During a night test flight at low-level, in March 1989, the An-26K Kaplya suffered a massive bird strike, which consequently destroyed the windshield and injured the pilot, who involuntarily downed the aircraft into the Azov Sea.

Fire-fighting version, for delivery of field equipment and para-dropping fire-fighters in lieu of water-bombing (any more info?).

An-26P : Aircraft fire engine fighter, retrofitted with water lifting vessels in pods either side of the lower fuselage.

An-26P Prozhektor A single conversion of an An-26 as a guided missile system airframe.

An-26REP [aircraft]) : Electronic Counter-Measures aircraft fitted with active jammers in cylindrical pods on either side of the lower fuselage sides, as well as chaff and I/R flares for self-defense.

An-26RL : An arctic surveillance, reconnaissance and monitoring aircraft used to monitor the icebergs and ice formations at arctic circle fitted with SLAR (Sideways Looking Airborne Radar) in long pods on either side of the lower fuselage, extra fuel in a cargo hold fuel tank, provision for surveyors and radar operators.

"Curl-B": (First use of the designation) A basic designation for a series of ELINT aircraft fitted with a wide range of electro-magnetic surveillance equipment. At least one aircraft, (tactical code '152'), retrofitted with the Tarahn (Ramming Attack) ELINT suite for use in Afghanistan.

An-26S : A new VIP Lounge aircraft for the Ukrainian Ministry of Defense delivered about 1997.

A proposed jet powered variant of the An-26.

DDR (Deutsche Demokratische Republik – German Democratic Republic) Air Force NAVAID calibration and flight monitoring, retrofitted from An-26 c/n11402, and transferred to the post-unification Luftwaffe
Luftwaffe
Luftwaffe is a generic German term for an air force. It is also the official name for two of the four historic German air forces, the Wehrmacht air arm founded in 1935 and disbanded in 1946; and the current Bundeswehr air arm founded in 1956....
as 52+09. 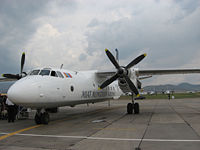