During its combat debut in the Yom Kippur War
Yom Kippur War
The Yom Kippur War, Ramadan War or October War , also known as the 1973 Arab-Israeli War and the Fourth Arab-Israeli War, was fought from October 6 to 25, 1973, between Israel and a coalition of Arab states led by Egypt and Syria...
, Egyptian and Syrian BMPs proved vulnerable to .50 calibre machinegun fire in the sides and rear, and to 106 mm recoilless rifle
Recoilless rifle
A recoilless rifle or recoilless gun is a lightweight weapon that fires a heavier projectile than would be practical to fire from a recoiling weapon of comparable size. Technically, only devices that use a rifled barrel are recoilless rifles. Smoothbore variants are recoilless guns...
s. The 73 mm gun
2A28 Grom
The 2A28 Grom is the main armament of the BMP-1 infantry fighting vehicle. It is a 73 mm low pressure smoothbore semi-automatic gun with wedge breechblock.-Description:...
proved inaccurate beyond 500 meters, and the AT-3 Sagger
AT-3 Sagger
The 9K11 Malyutka is a Manual Command to Line-of-Sight wire-guided anti-tank guided missile developed in the Soviet Union. It was the first man-portable anti-tank guided missile of the Soviet Union and is probably the most widely produced ATGM of all time—with Soviet production peaking at...
missile could not be guided effectively from the confines of the turret.

The BMP-2 is broadly similar to the BMP-1. The most significant changes are:

In the centre of the vehicle is the welded steel turret which seats the commander and gunner, both of whom have hatches. The commander sits to the right and has three day vision periscopes, a 1PZ-3 day-sight designed for anti-aircraft use with 1x, 2x and 4x magnification, an OU-3GA2 infra-red searchlight, a TNP-165A designator and a TKN-3B binocular sight with x4.75 day magnification and x4 night-sight magnification.

The gunner sits to the commanders left and has a smaller rectangular hatch with a rearward-facing day periscope, additionally there are three other day periscopes facing forward and left. The gunner has a BPK-1-42 binocular sight with a moon/starlight vision range of 650 meters or 350 meters using the infra-red searchlight, and a TNPT-1 designator. A FG-126 infra-red searchlight is mounted coaxially to the 30 mm cannon.

The driver sits in the front left of the vehicle, with the engine in a separate compartment to his right. The driver has his own entry hatch above him, with three day periscopes. The centre TNPO-170A periscope can be replaced with either a TNPO-350B extended periscope for amphibious operation or a TVNE-1PA night vision
Night vision
Night vision is the ability to see in low light conditions. Whether by biological or technological means, night vision is made possible by a combination of two approaches: sufficient spectral range, and sufficient intensity range...
scope. An infantry man sits immediately behind the driver, and has a firing port and vision block. TNPO-170A periscopes are used throughout the vehicle and are electrically heated.

The BMP-1 and BMP-2 share the same chassis and have almost identical road performance. The BMP-2 is heavier but also has a more powerful engine to compensate.

The BMP-2 is amphibious with little preparation, using hydrodynamic fairings to convert track momentum into water jets. Peacetime regulations require that any BMPs entering water must have a working radio set, since its bearings are not airtight and it can be carried away by currents in case of loss of engine power (the vehicle lacks an anchor).

The main armament is a stabilized 30 mm 2A42 autocannon with dual ammunition feeds which provide a choice of 3UBR6 AP-T and 3UOR6 HE-T / 3UOF8 HE-I ammunition. The gun has a selectable rate of fire, either slow at 200 to 300 rounds per minute or fast at 550 rounds per minute. The stabilisation provides reasonable accuracy up to a speed of about 35 kilometres per hour.

The commander's 1PZ-3 sight is specifically designed for anti-aircraft operation and combined with the high maximum elevation of 74 degrees, it allows the 30 mm cannon to be used effectively against helicopters and slow flying aircraft. The turret traverse and elevation are powered and it can traverse 360 degrees in 10.28 seconds and elevate through 74 degrees in 12.33 seconds.

Reloading the BMP-2's 30 mm cannon can be somewhat problematic, and can take up to two hours, even if the ammunition is prepared. Additionally the cannon is normally only used on the slow rate of fire, otherwise fumes from the weapon would build up in the turret faster than the extractor fan can remove them.

Behind the turret is the troop compartment which holds six troops, the seventh sits just behind the driver. The troops sit back to back, along the centre of the vehicle. Down each side of the compartment are three firing ports with periscopes. Access to the compartment is by the two rear doors, which also hold fuel tanks, both doors have integral periscopes and the left door has a firing port.

In addition to the main weapons it can carry a man portable surface to air missile launcher and two missiles, and an RPG launcher
RPG-7
The RPG-7 is a widely-produced, portable, unguided, shoulder-launched, anti-tank rocket-propelled grenade launcher. Originally the RPG-7 and its predecessor, the RPG-2, were designed by the Soviet Union, and now manufactured by the Bazalt company...
and five rounds. The vehicle is fitted with a PAZ overpressure NBC system and fire suppression system, and carries a GPK-59 gyrocompass
Gyrocompass
A gyrocompass­ is a type of non-magnetic compass which bases on a fast-spinning disc and rotation of our planet to automatically find geographical direction...
.

The original BMP-1 had a significant shortcoming in its protection scheme, which only became obvious during the war in Afghanistan. The one-man-turret fighting vehicle seated its driver and commander in tandem layout, in the front-left side of the hull alongside the diesel engine. When a BMP-1 hit the obsolete kind of "tilt-rod" anti-tank land mine
Land mine
A land mine is usually a weight-triggered explosive device which is intended to damage a target—either human or inanimate—by means of a blast and/or fragment impact....
, its steeply sloped lower front glacis armour plate allowed the mine's arming rod to tilt with little resistance until the maximum deflection was reached with the mine already well under the chassis. When it subsequently detonated, the blast usually killed both the driver and the vehicle commander, causing a significant loss of specialist personnel in the Soviet Army
Soviet Army
The Soviet Army is the name given to the main part of the Armed Forces of the Soviet Union between 1946 and 1992. Previously, it had been known as the Red Army. Informally, Армия referred to all the MOD armed forces, except, in some cases, the Soviet Navy.This article covers the Soviet Ground...
.

This shortcoming was addressed in the BMP-2 design, where the tank commander shares the well-armoured two-man turret with the gunner. The driver's station has been enlarged and he is provided with an armoured driver's seat, in addition to extra belly-armour in the lower front.

The BMP-2's armour is broadly similar to the original BMP-1. Its frontal and side armour is not effective against the most recent .50-calibre SLAP [Sabotted light anti-armour projectile] and the 25 mm cannon of the US M2 Bradley MICV or the British GKN Warrior IFV 30 RARDEN. Like the BMP-1, the rear doors of the BMP-2 are filled with diesel fuel offering some risk from incendiary rounds. These additional fuel tanks are shut off from the fuel system when in combat.

The problem most often cited by western analysts is the design of the main fuel tanks. Due to the low profile of the vehicle the designers had to place the fuel tanks between the two rows of outward-facing passenger seats, in other words, the infantry passengers actually sit on the bulk of the vehicle fuel storage, with extra fuel carried in the hollow rear doors. As the rear doors are weakly armoured, a hit with any kind of incendiary round will send burning fuel into the crew compartment, resulting in horrendous injuries and painful death to the occupants trapped inside the burning vehicle and a possible explosion.

However the rear door tanks are not always filled as they are meant to increase road travel range of the vehicle, and are almost always empty when the BMP goes into combat, instead being filled with sand to add protection. In intense war areas where the BMP sees action relatively often and relatively near to its base of operation, it is a practice not to fill them at all as a rule, and to add fuel to the internal tanks from other sources if the need arises. That however also means that an attack conducted behind enemy lines in a relatively safe area would have much more effect. Nonetheless, the inner fuel tanks (which are used) are more vulnerable than those of many modern IFVs – the weak armor means powerful shots (like RPGs in Chechnya and Afghanistan) can pierce both the outside vehicle armor and the inner tank armor. The last argument however comes from the fact that BMP is a lighter vehicle than some other designs. Naturally, heavier and more powerful vehicles, such as BTR-T
BTR-T
The BTR-T is a Russian heavy infantry combat vehicle, designed by the Design Bureau of Transport Machine-Building state-run production association.-Description:It is based on the hull of the T-55 tank and answers the need for a heavy, well protected and well armed...
, offer a substantially better protection.

Therefore, the arguments about the design of the fuel tanks or crew positioning in the BMP can only be considered an opinion, as there is no clearly better alternative given weight, functionality, and mobility requirements.

The basic hull armour on the BMP-2 can be easily penetrated by any shaped-charge missile, from the 66 mm LAW on up. One important modification carried out as the result of operational experience in Afghanistan was the fitting of a second layer of stand-off armour, usually a high resistant ballistic rubber-like material, to act as spaced armour around the top of the hull sides and around the turret.

In the Soviet Army, BMPs were typically issued to the motor rifle battalions of tank regiments. In a typical motor-rifle division, one motor-rifle regiment had BMPs, the other two had wheeled BTRs
BTR-60
The BTR-60 is the first vehicle in a series of Soviet eight-wheeled armoured personnel carriers. It was developed in the late 1950s as a replacement for the BTR-152 and was seen first time in public in 1961...
.

Proliferation varied greatly among the rest of the Warsaw Pact nations. For example, at least some East German motor-rifle divisions were recorded to have all three motor-rifle regiments with BMPs, ranging down to the Romanian and Bulgarian Armies, some of whose divisions had no BMPs at all.

Poland planned to replace its BWP-1 with BWP-2 (BMP-2 and BMP-2D) but because of financial problems ordered only 62 vehicles in 1988 which were delivered in 1989. Since obtaining sufficient number of BWP-2 vehicles after political changes of 1989 became impossible Poland was forced to abandon this plan. 62 BWP-2 that Poland bought were sold in 1995 to Angola. 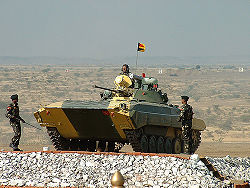