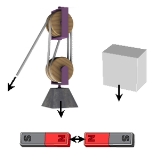 Overview
In physics
Physics
Physics is a natural science that involves the study of matter and its motion through spacetime, along with related concepts such as energy and force. More broadly, it is the general analysis of nature, conducted in order to understand how the universe behaves.Physics is one of the oldest academic...
, a force is any influence that causes an object
Physical body
In physics, a physical body or physical object is a collection of masses, taken to be one...
to undergo a change in speed, a change in direction, or a change in shape. In other words, a force is that which can cause an object with mass
Mass
Mass can be defined as a quantitive measure of the resistance an object has to change in its velocity.In physics, mass commonly refers to any of the following three properties of matter, which have been shown experimentally to be equivalent:...
to change its velocity
Velocity
In physics, velocity is speed in a given direction. Speed describes only how fast an object is moving, whereas velocity gives both the speed and direction of the object's motion. To have a constant velocity, an object must have a constant speed and motion in a constant direction. Constant ...
(which includes to begin moving from a state of rest), i.e., to accelerate, or which can cause a flexible object to deform. Force can also be described by intuitive concepts such as a push or pull.

Violence is the last refuge of the incompetent.

Violence is the repartee of the illiterate.

Force is not a remedy.

In a speech by John Bright

The wish to hurt, the momentary intoxication with pain, is the loophole through which the pervert climbs into the minds of ordinary men.

The Face of Violence by Jacob Bronowski

The use of force alone is but temporary. It may subdue for a moment; but it does not remove the necessity of subduing again; and a nation is not governed, which is perpetually to be conquered.

In the Conciliation with America speech given by Edmund Burke

Translation: The reason of the strongest is always the best

Translation: Brute force without judgement collapses under its own weight

A man may build himself a throne of bayonets, but he cannot sit upon it.

A riot is at the bottom the language of the unheard.

Let there be no violence in religion.

Chapter 2 of the Koran
More
x