Encyclopedia
BTR-80 is an 8x8 wheeled armoured personnel carrier
Armoured personnel carrier
An armoured personnel carrier is an armoured fighting vehicle designed to transport infantry to the battlefield.APCs are usually armed with only a machine gun although variants carry recoilless rifles, anti-tank guided missiles , or mortars...
(APC) designed in the Soviet Union
Soviet Union
The Soviet Union , officially the Union of Soviet Socialist Republics , was a constitutionally socialist state that existed in Eurasia between 1922 and 1991....
. Production started in 1986 and replaced the previous versions, BTR-60
BTR-60
The BTR-60 is the first vehicle in a series of Soviet eight-wheeled armoured personnel carriers. It was developed in the late 1950s as a replacement for the BTR-152 and was seen first time in public in 1961...
and BTR-70
BTR-70
The BTR-70 is an eight-wheeled armored personnel carrier , originally developed during the late 1960s under the industrial designator GAZ-4905. On August 21, 1972, it was accepted into service and would later be exported to the Warsaw Pact and other allies...
in the Soviet army
Soviet Army
The Soviet Army is the name given to the main part of the Armed Forces of the Soviet Union between 1946 and 1992. Previously, it had been known as the Red Army. Informally, Армия referred to all the MOD armed forces, except, in some cases, the Soviet Navy.This article covers the Soviet Ground...
.

The Soviets based the BTR-80 on the BTR-70
BTR-70
The BTR-70 is an eight-wheeled armored personnel carrier , originally developed during the late 1960s under the industrial designator GAZ-4905. On August 21, 1972, it was accepted into service and would later be exported to the Warsaw Pact and other allies...
APC. It has a single 260-hp, V-8 turbocharged, water-cooled, diesel engine, an improvement over the twin gasoline engines installed in the BTR-60 and BTR-70 vehicles. The reconfigured rear portion of the hull accommodates a new, single engine. The Soviets removed the roof chamfer
Chamfer
A chamfer is a beveled edge connecting two surfaces. If the surfaces are at right angles, the chamfer will typically be symmetrical at 45 degrees. A fillet is the rounding off of an interior corner. A rounding of an exterior corner is called a "round" or a "radius"."Chamfer" is a term commonly...
s of the modified BTR-70, raised the rear, and squared off the rearward-sloping engine compartment. Standard equipment include TNPO vision blocks, optical devices TNP-B and TKN-3 for the driver and commander, an OU-3GA2M infra-red search light, six 81 mm smoke grenade launchers 902V "Tucha", a radioset (R-173 or R-163-50U), an intercom and hydrojets.

The Soviets modified the truncated cone turret used on the BTR-70 for the BTR-80 by redesigning the mantlet. This allows the 14.5mm KPVT and coaxial 7.62mm PKT machine guns to be elevated to a maximum of 60 degrees. This high angle of fire is useful in engaging targets on steep slopes, in urban fighting, and for engaging helicopters. The Soviets have also modified the design and positioning of the firing ports; the ports are now round, rather than tear-shaped, and have ball mounts similar to those used on the BMP-1
BMP-1
The BMP-1 is a Soviet amphibious tracked infantry fighting vehicle. BMP stands for Boyevaya Mashina Pekhoty 1 , meaning "infantry fighting vehicle". The BMP-1 was the world's first mass-produced infantry fighting vehicle...
. The forward firing ports now sit in angled recesses which allow infantry to fire from the front of the vehicle. 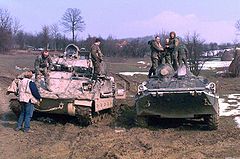 The redesigned side doors are split horizontally. The upper portion opens forward; this gives dismounting troops some protection against small arms fire from the front of the vehicle. The lower portion opens down, forming a step. Six smoke grenade projectors are mounted on the rear of the turret.

In 1984, the Soviets began production of a diesel
Diesel engine
A diesel engine is an internal combustion engine that uses the heat of compression to initiate ignition to burn the fuel, which is injected into the combustion chamber...
-engined variant of the BTR-70, which they called the BTR-80. The Soviets have retrofitted some BTR-70s with several of the improvements incorporated into the BTR-80, including the high-angle-of-fire turret.

There are over 5,000 BTR-80s in service in various armies around the world:
- 50 in service of the Armenian Army
Armenian Army
The Armenian Army is the largest branch of the Armed Forces of Armenia and consists of the ground forces responsible for the country's land-based operations. It was established in conjunction with the other components of Armenia's military on January 28, 1992, several months after the republic...
. - 70 in service of the Azerbaijani Army
Army of Azerbaijan
The Azerbaijani Land Forces are the land force component of the Azerbaijani Armed Forces.Since the fall of the Soviet Union, Azerbaijan has been trying to further develop its armed forces into a professional, well trained, and mobile military. Based on 2007 statistics the country has about 56,840...
. - 191 in service of Bangladesh Army
Bangladesh Army
The Bangladesh Army is the land forces branch and the largest of the three uniformed service of the Bangladesh Armed Forces. The primary mission of the Army is to provide necessary forces and capabilities in support of Bangladesh's security and defense strategies including defense of the nation's...
- 194 - 5 in service, Initially 100 units would be assembled under license in Colombia, the project was canceled. - 2 acquired in July 1990, Ps 690-1 and Ps 690-2 for evaluation (XA-185 was selected) - 513 BTR-80 and 178 BTR-80A - Indonesian Navy Marine Corps (Korps Marinir TNI-AL) use BTR-80 for their 1st Cavalry Regiment (Resimen Kavaleri 1) of the 1st Marine Force. From 2006, 12 BTR-80A serving for Indonesian UNIFIL Mission in Lebanon. - 50 BTR-94, 98 BTR-80UP ordered (first deliveries in 2006). 6 BTR-80 from Belarus - 190 BTR-80, 90 BTR-80A - 8 - 12 - 11 - 450 are in service as of 2011. - 32 BTR-80A (according to SIPRI trade registers) - BTR-70 / BTR-80 - 70 TAB Zimbru 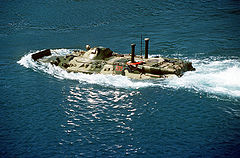