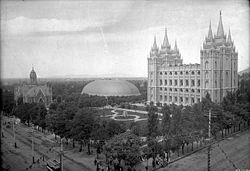 Upon completion, temples are usually open to the public for a short period of time (an "Open House"). During the Open House, the church conducts tours of the temple with missionaries
Missionary (LDS Church)
The Church of Jesus Christ of Latter-day Saints is one of the most active modern practitioners of missionary work, with over 52,000 full-time missionaries worldwide, as of the end of 2010...
and members from the local area serving as tour guides, and all rooms of the temple are open to the public. The temple is then dedicated as a "House of the Lord," after which only members in good standing are permitted entrance, thus they are not churches but rather places of worship.

Within temples, members of the Church make covenants
Covenant (theology)
In religion a covenant can refer to a promise between man and God:* Covenant , in the Hebrew Bible* Greater Covenant, in the Bahá'í Faith* Covenant Theology, in Christianity interpretations of a covenant surrounding Jesus's death and resurrection...
, receive instructions, and perform sacred ordinances, such as: baptism for the dead
Baptism for the dead
Baptism for the dead, vicarious baptism or proxy baptism is the religious practice of baptizing a living person on behalf of one who is dead, with the living person acting as the deceased person's proxy...
, washing and anointing
Washing and anointing
The washing and anointing is a temple ordinance of The Church of Jesus Christ of Latter-day Saints that pertains to exaltation within the Celestial Kingdom. Combined, the two ordinances are known as the initiatory, which is performed for both the living and the dead.-History:Ritual anointings were...
(or "initiatory" ordinances), the "endowment
Endowment (Mormonism)
In Mormonism, the endowment is an ordinance designed to prepare participants to become kings, queens, priests, and priestesses in the afterlife. As part of the ceremony, participants take part in a scripted reenactment of the Biblical creation and fall of Adam and Eve...
," and eternal marriage
Celestial marriage
Celestial marriage is a doctrine of Mormonism, particularly The Church of Jesus Christ of Latter-day Saints and branches of Mormon fundamentalism.Within Mormonism, celestial marriage is an ordinance associated with a covenant that always...
sealings. Ordinances are a vital part of the theology of the church, which teaches that they were practiced by the Lord's covenant people in all dispensations
Dispensationalist theology
Dispensational theology refers to the unified teachings of Dispensationalism that address what other views teach as divergent theologies in the Old Testament and New Testament...
. Additionally, members consider the temple a place to commune with God
Direct revelation
Direct revelation is a term used by some Christian churches to express their belief in a communication from God to a person, by words, impression, visions, dreams or actual appearance. Direct revelation is believed to be an open communication between God and man, or the Holy Spirit and man, without...
, seek God’s aid, understand the will of God, and receive personal revelation.

In 1832, shortly after the formation of the Church, Joseph Smith, Jr. said that the Lord desired the saints build a temple; and they completed the Kirtland Temple
Kirtland Temple
The Kirtland Temple is a National Historic Landmark in Kirtland, Ohio, USA, on the eastern edge of the Cleveland metropolitan area. Owned and operated by the Community of Christ, formerly the Reorganized Church of Jesus Christ of Latter Day Saints , the house of worship was the first temple to be...
in 1836. Initially, the Church constructed temples in areas where there were large concentrations of members: Utah
Utah
Utah is a state in the Western United States. It was the 45th state to join the Union, on January 4, 1896. Approximately 80% of Utah's 2,763,885 people live along the Wasatch Front, centering on Salt Lake City. This leaves vast expanses of the state nearly uninhabited, making the population the...
, Idaho
Idaho
Idaho is a state in the Rocky Mountain area of the United States. The state's largest city and capital is Boise. Residents are called "Idahoans". Idaho was admitted to the Union on July 3, 1890, as the 43rd state....
, Arizona
Arizona
Arizona ; is a state located in the southwestern region of the United States. It is also part of the western United States and the mountain west. The capital and largest city is Phoenix...
, Hawai'i (all in the USA), and Alberta
Alberta
Alberta is a province of Canada. It had an estimated population of 3.7 million in 2010 making it the most populous of Canada's three prairie provinces...
(Canada
Canada
Canada is a North American country consisting of ten provinces and three territories. Located in the northern part of the continent, it extends from the Atlantic Ocean in the east to the Pacific Ocean in the west, and northward into the Arctic Ocean...
). In the mid 20th century, because of the importance of temples in the theology, the Church tried to balance density with the travel requirements that attending the temple imposed upon members. Thus, temples were built in Europe
Europe
Europe is, by convention, one of the world's seven continents. Comprising the westernmost peninsula of Eurasia, Europe is generally 'divided' from Asia to its east by the watershed divides of the Ural and Caucasus Mountains, the Ural River, the Caspian and Black Seas, and the waterways connecting...
(Switzerland
Switzerland
Switzerland name of one of the Swiss cantons. ; ; ; or ), in its full name the Swiss Confederation , is a federal republic consisting of 26 cantons, with Bern as the seat of the federal authorities. The country is situated in Western Europe,Or Central Europe depending on the definition....
-1955 and England
England
England is a country that is part of the United Kingdom. It shares land borders with Scotland to the north and Wales to the west; the Irish Sea is to the north west, the Celtic Sea to the south west, with the North Sea to the east and the English Channel to the south separating it from continental...
-1958); the Pacific Islands
Pacific Islands
The Pacific Islands comprise 20,000 to 30,000 islands in the Pacific Ocean. The islands are also sometimes collectively called Oceania, although Oceania is sometimes defined as also including Australasia and the Malay Archipelago....
(New Zealand
New Zealand
New Zealand is an island country in the south-western Pacific Ocean comprising two main landmasses and numerous smaller islands. The country is situated some east of Australia across the Tasman Sea, and roughly south of the Pacific island nations of New Caledonia, Fiji, and Tonga...
-1958); and Washington, D.C.
Washington, D.C.
Washington, D.C., formally the District of Columbia and commonly referred to as Washington, "the District", or simply D.C., is the capital of the United States. On July 16, 1790, the United States Congress approved the creation of a permanent national capital as permitted by the U.S. Constitution....
(1974 - first American temple East of Utah since Nauvoo
Nauvoo Temple
The Nauvoo Temple was the second temple constructed by the Church of Jesus Christ of Latter Day Saints, commonly known as the Mormons. The church's first temple was completed in Kirtland, Ohio, United States in 1836. When the main body of the church was forced out of Nauvoo, Illinois in the...
in 1846) when membership alone might not have justified the effort.

In the 1980s, Spencer W. Kimball
Spencer W. Kimball
Spencer Woolley Kimball was the twelfth president of The Church of Jesus Christ of Latter-day Saints from 1973 until his death in 1985.-Ancestry:...
directed the Church to build smaller temples with similar designs allowing temples to be built where there were fewer members. As a result the first temples in South America
South America
South America is a continent situated in the Western Hemisphere, mostly in the Southern Hemisphere, with a relatively small portion in the Northern Hemisphere. The continent is also considered a subcontinent of the Americas. It is bordered on the west by the Pacific Ocean and on the north and east...
(Brazil
Brazil
Brazil , officially the Federative Republic of Brazil , is the largest country in South America. It is the world's fifth largest country, both by geographical area and by population with over 192 million people...
-1978); Asia
Asia
Asia is the world's largest and most populous continent, located primarily in the eastern and northern hemispheres. It covers 8.7% of the Earth's total surface area and with approximately 3.879 billion people, it hosts 60% of the world's current human population...
(Japan
Japan
Japan is an island nation in East Asia. Located in the Pacific Ocean, it lies to the east of the Sea of Japan, China, North Korea, South Korea and Russia, stretching from the Sea of Okhotsk in the north to the East China Sea and Taiwan in the south...
-1980); and Central America
Central America
Central America is the central geographic region of the Americas. It is the southernmost, isthmian portion of the North American continent, which connects with South America on the southeast. When considered part of the unified continental model, it is considered a subcontinent...
(Mexico City
Mexico City
Mexico City is the Federal District , capital of Mexico and seat of the federal powers of the Mexican Union. It is a federal entity within Mexico which is not part of any one of the 31 Mexican states but belongs to the federation as a whole...
-1983) were built and the number of temples doubled from 15 to 36.

Church president and prophet
Prophet, seer, and revelator
Prophet, seer, and revelator is an ecclesiastical title used in The Church of Jesus Christ of Latter-day Saints that is currently applied to the members of the First Presidency and the Quorum of the Twelve Apostles...
Gordon B. Hinckley
Gordon B. Hinckley
Gordon Bitner Hinckley was an American religious leader and author who served as the 15th President of The Church of Jesus Christ of Latter-day Saints from March 12, 1995 until his death...
(1910–2008) also accelerated the construction of temples through the use of an even smaller standardized base design.
In 1998 when there were only 51 temples, Hinckley set a goal to have 100 temples before 2001. Between the brief building period from 1998 to 2001, 38 of these standardized temples were constructed and dedicated, meeting Hinckley's goal by having 102 dedicated temples before 2001. During Hinckley's service as president, the number of temples more than doubled from 47 to 124.


Destroyed or operated by others

LDS President Gordon B. Hinckley's goal to reach 100 temples by end of 2000 reached

Note: Numbering of temples announced or under construction is tentative (which is indicated by placing the numbers in italics) and based upon the groundbreaking date, or the date of announcement if no groundbreaking has taken place. Permanent numbering may change depending upon the date of dedication.
|}

The following is a list of temples that had been announced and in some stage of development, but whose construction is no longer being pursued.