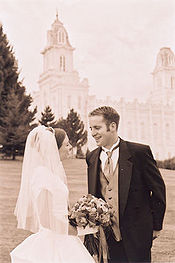 Celestial marriage is a doctrine of Mormonism
Mormonism
Mormonism is the religion practiced by Mormons, and is the predominant religious tradition of the Latter Day Saint movement. This movement was founded by Joseph Smith, Jr. beginning in the 1820s as a form of Christian primitivism. During the 1830s and 1840s, Mormonism gradually distinguished itself...
, particularly The Church of Jesus Christ of Latter-day Saints (LDS Church) and branches of Mormon fundamentalism.

Within Mormonism, celestial marriage is an ordinance associated with a covenant that always takes place inside temples by those authorized to hold the sealing power
Sealing power
In Mormonism, the sealing power is the means whereby all "covenants, contracts, bonds, obligations, oaths, vows, performances, connections, associations, or expectations" attain "efficacy, virtue, or force in and after the resurrection from the dead." All things that are not sealed by this power...
. The only people allowed to enter the temple, be married there, or simply attend these weddings are those who hold an official temple recommend. Obtaining a temple recommend requires one to abide by LDS doctrine and be interviewed and considered worthy by their bishop
Bishop
A bishop is an ordained or consecrated member of the Christian clergy who is generally entrusted with a position of authority and oversight. Within the Catholic Church, Eastern Orthodox, Oriental Orthodox Churches, in the Assyrian Church of the East, in the Independent Catholic Churches, and in the...
and Stake President. A prerequisite to contracting a celestial marriage, in addition to obtaining a temple recommend, involves undergoing the temple endowment
Endowment (Latter Day Saints)
In the theology of the Latter Day Saint movement, an endowment refers to a gift of "power from on high", typically associated with Latter Day Saint temples. The purpose and meaning of the endowment varied during the life of movement founder Joseph Smith, Jr...
, which involves making of certain covenants with God.

In particular, one is expected to promise to be obedient to all the Lord's commandments including living a clean chaste life, abstaining oneself from any impure thing, willing to sacrifice and consecrate all that one has for the Lord. In the marriage ceremony a man and a woman make covenants to God and to each other and are said to be sealed as husband and wife for time and all eternity. Mormonism distinguishes itself on this point, citing and , from some other religious traditions by emphasizing that marriage relationships and covenants made in this life in the Temple will continue to be valid in the next life if they abide by these covenants.

In the 19th century the term celestial marriage referred more to the practice of plural marriage
Plural marriage
Polygamy was taught by leaders of The Church of Jesus Christ of Latter-day Saints for more than half of the 19th century, and practiced publicly from 1852 to 1890.The Church's practice of polygamy has been highly controversial, both within...
, a practice which the LDS Church abandoned in 1890. The term is still used in this sense by Mormon fundamentalists not affiliated with the mainstream LDS Church.

In the current LDS Church, both men and women may enter a celestial marriage with only one partner at a time. A man may be sealed to more than one woman. If his wife
Wife
A wife is a female partner in a marriage. The rights and obligations of the wife regarding her spouse and others, and her status in the community and in law, varies between cultures and has varied over time.-Origin and etymology:...
dies, he may enter another celestial marriage, and be sealed to both his living wife and deceased wife or wives. Many Mormons believe that all these marriages will be valid in the eternities and the husband will live together in the Celestial Kingdom as a family with all to whom he was sealed. In the 1998 edition of the Church Handbook of Instructions, the LDS Church clarified that a woman may also be sealed to more than one man. A woman, however, may not be sealed to more than one man at a time while she is alive. She may only be sealed to subsequent partners after she has died. Proxy sealings, like proxy baptisms, are merely offered to the person in the afterlife, indicating that the purpose is to allow the woman to choose the right man to be sealed to, as LDS doctrine forbids polyandry
Polyandry
Polyandry refers to a form of marriage in which a woman has two or more husbands at the same time. The form of polyandry in which a woman is married to two or more brothers is known as "fraternal polyandry", and it is believed by many anthropologists to be the most frequently encountered...
. According to LDS belief, the celestial marriage covenant, as with other covenants, requires the continued righteousness of the couple to remain in effect after this life. If only one remains righteous that person is promised a righteous eternal companion in eternity.

Celestial marriage is an instance of the LDS doctrine of sealing. Following a celestial marriage, not only are the couple sealed as husband and wife, but children born into the marriage are also sealed to that family. In cases where the husband and wife have been previously married civilly and there are already children from their union, the children accompany their parents to the temple and are sealed to their parents following the marriage ceremony.

Mormons believe that through this sealing, man, wife and child will live together forever, if obedient to God's commandments.

There is substantial doctrinal dispute between the LDS Church and its offshoots as to whether celestial marriage is plural or monogamous. Sealings for "time and eternity" (i.e. Celestial marriages) were being performed for monogamous couples long before 1890. The great majority of temple sealings were between one man and one wife throughout all time periods of the LDS Church's history.

"...it is borne in mind that at this time the new law of marriage for the Church — marriage for eternity, including plurality of wives under some circumstances— was being introduced by the Prophet, it is very likely that the following article was written with a view of applying the principles here expounded to the conditions created by introducing said marriage system."

"He knew the voice of God—he knew the commandment of the Almighty to him was to go forward—to set the example, and establish Celestial plural marriage. He knew that he had not only his own prejudices and pre-possessions to combat and to overcome, but those of the whole Christian world…; but God...had given the commandment". Nevertheless, it is correct and can be demonstrated that "celestial marriage" was often used to refer to plural marriage.

Marriage between man and wife is viewed by the Church to be ordained by God and essential for his plan. Plural marriage was discontinued by President Woodruff in 1890. If members continue to practice plural marriage, they lose their church membership.

A concept of celestial marriage was described by Emanuel Swedenborg
Emanuel Swedenborg
was a Swedish scientist, philosopher, and theologian. He has been termed a Christian mystic by some sources, including the Encyclopædia Britannica online version, and the Encyclopedia of Religion , which starts its article with the description that he was a "Swedish scientist and mystic." Others...
as early as 1749. Swedenborg's Latin term conjugium coeleste was translated as "celestial marriage" by John Clowes in 1782. Two more recent translators have preferred the term "heavenly marriage." In all his authoritative writing, Swedenborg only mentions the term celestial marriage twice.

According to Swedenborg, true married love forms an eternal bond, an actual joining together of minds, so that married partners who truly love each other are not separated by death but continue to be married to eternity. He writes that this love is "celestial, spiritual, holy pure and clean above every love which exists from the Lord with angels of heaven and people in the church." None can come into this love, he says, but those who are monogamous and "who go to the Lord and love the truths of the church and do the good things it teaches."

Craig Miller has investigated the possibility that Swedenborg influenced Joseph Smith, as there are similarities between some of their teachings. He concludes that Smith may have learned something about Swedenborg through third parties, but was unlikely to have read much if any of Swedenborg's works for himself. Among Smith's connections was Sarah Cleveland, who was married to a Swedenborgian at the time of her plural marriage to Smith in 1842. It was shortly afterwards, in July 1843, that Smith recorded receiving a revelation regarding eternal marriage in Doctrine and Covenants
Doctrine and Covenants
The Doctrine and Covenants is a part of the open scriptural canon of several denominations of the Latter Day Saint movement...
132.