This is a list of towns and cities in Norway
Norway
Norway , officially the Kingdom of Norway, is a Nordic unitary constitutional monarchy whose territory comprises the western portion of the Scandinavian Peninsula, Jan Mayen, and the Arctic archipelago of Svalbard and Bouvet Island. Norway has a total area of and a population of about 4.9 million...
.

The Norwegian word for town
Town
A town is a human settlement larger than a village but smaller than a city. The size a settlement must be in order to be called a "town" varies considerably in different parts of the world, so that, for example, many American "small towns" seem to British people to be no more than villages, while...
or city
City
A city is a relatively large and permanent settlement. Although there is no agreement on how a city is distinguished from a town within general English language meanings, many cities have a particular administrative, legal, or historical status based on local law.For example, in the U.S...
is by. Cities were formerly categorized as kjøpstad
Kjobstad
Kjobstad is an old scandinavian term for "Market town" notably Norwegian. Kjobstad's were places of trade and exporting materials...
(market town) or ladested (small seaport), each with special rights
Town privileges
Town privileges or city rights were important features of European towns during most of the second millennium.Judicially, a town was distinguished from the surrounding land by means of a charter from the ruling monarch that defined its privileges and laws. Common privileges were related to trading...
. The special trading rights for cities were abolished in 1857, and the classification was entirely rescinded in 1952 and replaced by the simple classification by.

Because of the new laws, Norway witnessed a rapid rise in the number of cities after 1996. Interestingly, a number of relatively small settlements are now called by, such as Brekstad
Brekstad
Brekstad is the administrative centre of the municipality of Ørland in Sør-Trøndelag county, Norway. It is located on the Trondheimsfjord at the entrance to the Stjørnfjord. It is about south of Uthaug and about west of Austrått and Ottersbo....
with 1,828 inhabitants and Kolvereid
Kolvereid
Kolvereid is a town and former municipality in Nord-Trøndelag county, Norway. It is located within the present-day municipality of Nærøy. The small town of Kolvereid is also the administrative centre of the municipality....
with 1,448 inhabitants. Among the cities of today which got this status before 1996, Tvedestrand
Tvedestrand
is a town and municipality in Aust-Agder county, Norway. It is located in the traditional district of Sørlandet. The administrative center is the village of Tvedestrand....
with 1,983 inhabitants is the smallest. On another note, the laws of 1996 allowed some settlements which lost their city status in the 1960s to regain it.

Oslo
Oslo
Oslo is a municipality, as well as the capital and most populous city in Norway. As a municipality , it was established on 1 January 1838. Founded around 1048 by King Harald III of Norway, the city was largely destroyed by fire in 1624. The city was moved under the reign of Denmark–Norway's King...
, founded in year 1000, is the largest city in Norway as well as the capital
Capital City
Capital City was a television show produced by Euston Films which focused on the lives of investment bankers in London living and working on the corporate trading floor for the fictional international bank Shane-Longman....
.


Cities and towns in Norway

Note that in most cases the population listed here is that of the municipality, including other villages, not just the urban centre.


City or town status since before 1996 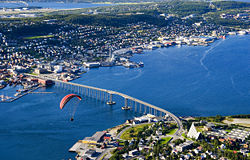 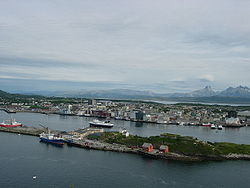 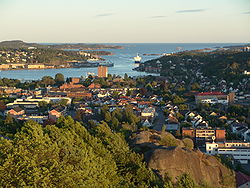 City status since after 1996