As indicated by archeological findings in the city, the Kristiansand area has been settled at least since 400 AD. A royal farm is known to have been situated on Oddernes
Oddernes
Oddernes is a former municipality in Vest-Agder county in Norway. It is located in the present-day municipality of Kristiansand. The former municipality of Oddernes encircled the city of Kristiansand, and it encompassed villages such as Flekkerøy, Vågsbygd, Slettheia, Lund, Strai, Mosby, Justvik,...
as early as 800, and the first church was built around 1040. The first settlements near the modern city were located further down the river, in or near what is today the borough of Lund
Lund, Norway
Lund is a municipality in Rogaland county, Norway. The administrative center of the municipality is the village of Moi. The parish of Lunde was established as a municipality on 1 January 1838...
, and at Flekkerøy, an island outside the city centre. 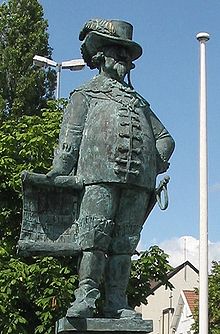 Kristiansand was formally founded by King Christian IV in 1641. It was created as a market town
Market town
Market town or market right is a legal term, originating in the medieval period, for a European settlement that has the right to host markets, distinguishing it from a village and city...
to encourage growth in a strategically significant area, providing a local economic base for construction of fortifications and population for defence of the area. The centre of Kristiansand, in layout essentially unchanged since the 17th century, is called "Kvadraturen" due to its square gridline of streets.

The city experienced its first major town fire in 1734, when large parts of the city was destroyed. Kristiansand grew into a major port during the 18th century, both due to its expanding ship building industry and its trade fleet. The city burned again in 1892. As a neutral trade port, the economy of Kristiansand thrived during World War I
World War I
World War I , which was predominantly called the World War or the Great War from its occurrence until 1939, and the First World War or World War I thereafter, was a major war centred in Europe that began on 28 July 1914 and lasted until 11 November 1918...
, but the growth stagnated due to political decisions and the Great Depression
Great Depression
The Great Depression was a severe worldwide economic depression in the decade preceding World War II. The timing of the Great Depression varied across nations, but in most countries it started in about 1929 and lasted until the late 1930s or early 1940s...
of the late 1920s and 1930s.

The Quart festival
Quart Festival
The Quart Festival was an annual popular music festival that took place in Kristiansand, Norway in the beginning of July. It was the most visited music festival in Norway....
, held every year at the beginning of July, is back in 2009 after financial difficulties that saw it close in 2008. As Norway’s biggest music festival, Quart has taken place in Kristiansand every July since 1991. Originally named Qvadradurmusivalen, its name was changed to the more catchy Quart Festival the following year. For several years Quart was the largest music festival in Norway, but has struggled in recent years in part due to tough competition from the Hovefestivalen in Tromøya, Arendal
Arendal
is a town and municipality in the county of Aust-Agder, Norway. Arendal belongs to the traditional region of Sørlandet.The town of Arendal is the administrative center the municipality and also of Aust-Agder county...
and some Oslo
Oslo
Oslo is a municipality, as well as the capital and most populous city in Norway. As a municipality , it was established on 1 January 1838. Founded around 1048 by King Harald III of Norway, the city was largely destroyed by fire in 1624. The city was moved under the reign of Denmark–Norway's King...
based festivals. The rock music event lasts for five days and has concerts on a big stage in Oderøya, a peninsula south of the town centre, as well as on smaller stages around the town. Quart is known for attracting famous international artists to Kristiansand each year as in addition to finding new young talents, for whom performing in Quart meant a fast and steady track to fame. Many of today’s big stars previously appeared on Quart’s smaller stages. The line-up for the revitalized Quart Festival 2009 includes world-famous stars, such as Ozzy Osbourne
Ozzy Osbourne
John Michael "Ozzy" Osbourne is an English vocalist, whose musical career has spanned over 40 years. Osbourne rose to prominence as lead singer of the pioneering English heavy metal band Black Sabbath, whose radically different, intentionally dark, harder sound helped spawn the heavy metal...
, Fergie, The Black Eyed Peas
The Black Eyed Peas
The Black Eyed Peas are an American pop group , formed in Los Angeles, California, in 1995. The group includes rappers will.i.am, apl.de.ap, and Taboo, and singer Fergie. Since the release of their third album Elephunk in 2003, the group has sold an estimated 56 million records worldwide...
, Marilyn Manson
Marilyn Manson
Marilyn Manson may refer to:* Marilyn Manson , an American rock musician* Marilyn Manson , the American rock band led by the singer of the same name...
and Placebo
Placebo (band)
Placebo are a British rock band from London, England, formed in 1994 by singer and guitarist Brian Molko and bass guitarist Stefan Olsdal. The band was joined by drummer Robert Schultzberg, who was later replaced by Steve Hewitt after conflicts with Molko. Hewitt left the band in October 2007 and...
.

Kristiansand is a home to many other festivals as well. A noteworthy example is the Protestfestival
Protestfestival
The ProtestfestivalThe Protest Festival of Kristiansand, Norway, is a protest against powerlessness and indifference, in support of commitment and action...
. It was launched in 2000 and takes place every September. Protestfestival aims to address apathy and indifference in politics, and is often referred to as "the small festival that asks the big questions". Debates, concerts and lectures are held at the festival combined with performance art and documentaries. Protestfestival claims to attract anarchists, communists, hippies as well as conservative Christians and capitalists and encourage communication among these radically different groups.

Festivals run throughout the year in Kristiansand. Some of these include the Bragdøya Blues Festival in June, the Dark Season Festival in October, Cultural Night and the International Children Film Festival in April. Kristiansand has an active music scene as well. The Kristiansand Symphonic Orchestra as well as Chamber Orchestra and Wind Ensemble are now well known after their merging in 2003. The new Concert Hall “Kilden” is planned to be finished in Kristiansand in 2011. So far concerts take place in Agder Theatre, which is also a venue for most of the other big events. South Norway’s Art Museum is also in the centre of Kristiansand. It was established in 1995 and is the second biggest regional art museum in Norway.

The museum runs an extensive programme, which includes exhibitions of the permanent collection, temporary contemporary art-exhibitions and touring exhibitions to schools and child-care initiatives. The museum is working to generate interest, engagement, knowledge and understanding of the arts, crafts and other visual arts.

Cultiva, which is a local government foundation, was established to ensure a portion of the profits made from selling shares in Agder Energy Ltd have lasting benefits to the community, with some of the money invested in cultural projects in Kristiansand. In addition, in 2007 Kristiansand won cultural funding from “Norges kulturkommune”, which was established by the Norwegian Culture Forum and is awarded every other year. Fiskebrygga, in Kristiansand, is very popular in summer. In the 1990s the area was refurbished transforming the traditional landing area for boats with restaurants and shops.

The City’s famous football team, IK Start, had their final home game at Kristiansand Stadium in 2006. As of 2007 the team has been moved to its newer facilities in Sør Arena
Sør Arena
Sør Arena is a football stadium located at Torsvika in Kristiansand, Norway. The all-seater has a capacity of 14,563 people, and serves as the home ground of Tippeligaen side IK Start. It was designed by Kjell Kosberg, and is architecturally similar to Aker Stadion. The venue has seen concerts by...
. Kristiansand is also known for its handball teams (KIF and Kristiansand Vipers), basketball (Kristiansand Pirates), volleyball club (Grim VBK) and baseball team (Kristiansand Suns). Kristiansand Suns is commonly known as the morale winners of the NM 2010.

The zoological garden, Kristiansand Dyrepark (Kristiansand Zoo and Amusement Park) just east of the city, has a wide selection of animals in, for the most part, natural habitats. This includes animals such as wolves, tiger
Tiger
The tiger is the largest cat species, reaching a total body length of up to and weighing up to . Their most recognizable feature is a pattern of dark vertical stripes on reddish-orange fur with lighter underparts...
s, lion
Lion
The lion is one of the four big cats in the genus Panthera, and a member of the family Felidae. With some males exceeding 250 kg in weight, it is the second-largest living cat after the tiger...
s and the lynx
Lynx
A lynx is any of the four Lynx genus species of medium-sized wildcats. The name "lynx" originated in Middle English via Latin from Greek word "λύγξ", derived from the Indo-European root "*leuk-", meaning "light, brightness", in reference to the luminescence of its reflective eyes...
. The Dyreparken draws many tourists and is the second most visited in Norway. The zoo is open 365 days while the amusement park is open during the summer season only.

Agderforskning (Agder Research) is an interdisciplinary social science research institute based in Kristiansand. As well as broad involvement in festivals, Agderforskning is also working on projects connected to value creation in coastal culture, cultural heritage, film and travel and tourism production, cultural experience surveys, cultural activities financing, interaction and innovation processes connected to art in the workplace, cooperation in the tourism industry, experiential tourism, entrepreneurship in the music industry, and dialogue-based innovation where art, culture and commerce meet. Although strongly based in the Kristiansand and the surrounding area, their studies are far reaching; nationally, throughout Scandinavia and in Europe in the development of international research projects. More information about their most recent project on festivals is on the website www.festivals.no.

Kristiansand has major shipbuilding and repair facilities that support Norway's North Sea oil industry. Near Kristiansand there is the static inverter plant
Static inverter plant
A static inverter station, also known as an HVDC Converter Station, is the terminal equipment for a high-voltage direct-current transmission line, in which direct current is converted to three-phase alternating current, and, usually, the reverse...
of the HVDC Cross-Skagerak
Cross-Skagerak
Cross-Skagerrak is the name of an high-voltage direct current transmission facility between Tjele and Kristiansand . It is owned and operated by Statnett in Norway, and Energinet.dk in Denmark.-Technical features:...
.

Kristiansand is also home of one of the BI Norwegian Business School's campuses, in addition to The Gimlekollen School of Journalism and Communication , which offers degrees in journalism and communication.