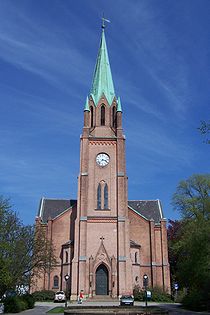 (literally Fredrik's Town) is a city and municipality
Municipalities of Norway
Norway is divided into 19 administrative regions, called counties , and 430 municipalities...
in Østfold
Østfold
is a county in southeastern Norway, bordering Akershus and southwestern Sweden , while Buskerud and Vestfold is on the other side of the bay. The seat of the county administration is Sarpsborg, and Fredrikstad is the largest city.Many manufacturing facilities are situated here. Moss and...
county
Counties of Norway
Norway is divided into 19 administrative regions, called counties . The counties form the primary first-level subdivisions of Norway and are further divided into 430 municipalities...
, Norway
Norway
Norway , officially the Kingdom of Norway, is a Nordic unitary constitutional monarchy whose territory comprises the western portion of the Scandinavian Peninsula, Jan Mayen, and the Arctic archipelago of Svalbard and Bouvet Island. Norway has a total area of and a population of about 4.9 million...
. The administrative centre of the municipality is the city of Fredrikstad.

The city straddles the river
River
A river is a natural watercourse, usually freshwater, flowing towards an ocean, a lake, a sea, or another river. In a few cases, a river simply flows into the ground or dries up completely before reaching another body of water. Small rivers may also be called by several other names, including...
Glomma
Glomma
The Glomma or Glåma is the longest and largest river in Norway. The long river has a drainage basin that covers a full 13% of Norway's area, all in the southern part of Norway.-Geography:...
where it meets the Skagerrak
Skagerrak
The Skagerrak is a strait running between Norway and the southwest coast of Sweden and the Jutland peninsula of Denmark, connecting the North Sea and the Kattegat sea area, which leads to the Baltic Sea.-Name:...
. Along with neighboring Sarpsborg
Sarpsborg
is a city and municipality in Østfold county, Norway. The administrative centre of the municipality is the city of Sarpsborg.Sarpsborg is part of the fifth largest urban area in Norway when paired with neighbouring Fredrikstad...
, Fredrikstad forms the fifth largest city in Norway: Fredrikstad/Sarpsborg
Fredrikstad/Sarpsborg
Fredrikstad/Sarpsborg is an urban area consisting of the twin cities Sarpsborg and Fredrikstad, in addition to several smaller towns in between and on the outside of the core of the cities....
. As of 1 January 2008, according to Statistics Norway
Statistics Norway
Statistics Norway is the Norwegian statistics bureau. It was established in 1876.Relying on a staff of about 1,000, Statistics Norway publish about 1,000 new statistical releases every year on its web site. All releases are published both in Norwegian and English...
, these two municipalities have a total population of 123,029 with 71,976 in Fredrikstad and 51,053 in Sarpsborg.

Fredrikstad was built at the mouth of Glomma as a replacement after Sarpsborg (15 km upstream) was burned down by the Swedes. Almost half the population of Sarpsborg stayed behind, and rebuilt their old town at its original site.

The city centre is on the west bank of the Glomma, while the old town on the east bank is Northern Europe
Northern Europe
Northern Europe is the northern part or region of Europe. Northern Europe typically refers to the seven countries in the northern part of the European subcontinent which includes Denmark, Estonia, Latvia, Lithuania, Norway, Finland and Sweden...
's best preserved fortified town
Fredrikstad Fortress
Fredrikstad fortress was a fortification in Fredrikstad, Norway. It was the base of the Østfold Regiment, with defence related responsibilities for the east side of Oslo Fjord.-History:...
.

Fredrikstad used to have a large sawmill industry and was an important harbour for timber
Timber
Timber may refer to:* Timber, a term common in the United Kingdom and Australia for wood materials * Timber, Oregon, an unincorporated community in the U.S...
export, then later on shipbuilding
Shipbuilding
Shipbuilding is the construction of ships and floating vessels. It normally takes place in a specialized facility known as a shipyard. Shipbuilders, also called shipwrights, follow a specialized occupation that traces its roots to before recorded history.Shipbuilding and ship repairs, both...
, until the main yard was closed in the 1980s. The main industries
Industry
Industry refers to the production of an economic good or service within an economy.-Industrial sectors:There are four key industrial economic sectors: the primary sector, largely raw material extraction industries such as mining and farming; the secondary sector, involving refining, construction,...
are currently various chemical
Chemistry
Chemistry is the science of matter, especially its chemical reactions, but also its composition, structure and properties. Chemistry is concerned with atoms and their interactions with other atoms, and particularly with the properties of chemical bonds....
plants and other light industry.

In 2005, Fredrikstad was the final host port for the Tall Ships' Race, attracting thousands to the city.

The city was named after the Danish
Denmark
Denmark is a Scandinavian country in Northern Europe. The countries of Denmark and Greenland, as well as the Faroe Islands, constitute the Kingdom of Denmark . It is the southernmost of the Nordic countries, southwest of Sweden and south of Norway, and bordered to the south by Germany. Denmark...
king Frederik II in 1569. The last element stad means "city
City
A city is a relatively large and permanent settlement. Although there is no agreement on how a city is distinguished from a town within general English language meanings, many cities have a particular administrative, legal, or historical status based on local law.For example, in the U.S...
".

Prior to 1877, the name was spelled Frederiksstad, then from 1877-1888 it was written as Fredriksstad, and finally since 1889 it has been spelled in its current form: Fredrikstad.

The coat-of-arms
Coat of arms
A coat of arms is a unique heraldic design on a shield or escutcheon or on a surcoat or tabard used to cover and protect armour and to identify the wearer. Thus the term is often stated as "coat-armour", because it was anciently displayed on the front of a coat of cloth...
is from modern times. They were granted on 21 April 1967. The old arms are based on the oldest known seal of the city, which dates from 1610. They showed a fortress being guarded by a bear
Bear
Bears are mammals of the family Ursidae. Bears are classified as caniforms, or doglike carnivorans, with the pinnipeds being their closest living relatives. Although there are only eight living species of bear, they are widespread, appearing in a wide variety of habitats throughout the Northern...
. Strangely, Fredrikstad had no fortifications in 1610 (it received some at the end of the 17th century). Fredrikstad was founded by citizens of Sarpsborg and both the fortress and the bear are taken from the old arms of Sarpsborg. The composition of the seal was also used as arms since the beginning of the 19th century. The new arms were granted at the 400th anniversary of the city in 1967 and show a more modern variation on the fortress and bear.

After Sarpsborg
Sarpsborg
is a city and municipality in Østfold county, Norway. The administrative centre of the municipality is the city of Sarpsborg.Sarpsborg is part of the fifth largest urban area in Norway when paired with neighbouring Fredrikstad...
was burned to the ground during the Northern Seven Years' War
Northern Seven Years' War
The Northern Seven Years' War was the war between Kingdom of Sweden and a coalition of Denmark–Norway, Lübeck and the Polish–Lithuanian union, fought between 1563 and 1570...
, the ruling king, Frederik II of Denmark, decided by royal decree to rebuild the city 15 kilometres (9 mi) south of the original location. This new site's proximity to the sea and the accessible open land surrounding it made it a better location than the old one. The name Fredrikstad was first used in a letter from the King dated 6 February 1569. The temporary fortification built during the Hannibal War
Hannibal War
The Torstenson war, Hannibal controversy or Hannibal War was a short period of conflict between Sweden and Denmark–Norway which occurred in 1643 to 1645 during the waning days of the Thirty Years' War...
(1644–1645) between Sweden
Sweden
Sweden , officially the Kingdom of Sweden , is a Nordic country on the Scandinavian Peninsula in Northern Europe. Sweden borders with Norway and Finland and is connected to Denmark by a bridge-tunnel across the Öresund....
and Denmark-Norway, became permanent in the 1660s.

The work on the fortifications was first led by William de Coucheron and later Johan Caspar von Cicignon
Johan Caspar von Cicignon
Johan Caspar von Cicignon was a Luxembourg born soldier and military engineer who spent most of his career in the service of Denmark–Norway...
. During the next 60 years, several fortifications at the Fredrikstad Fortress
Fredrikstad Fortress
Fredrikstad fortress was a fortification in Fredrikstad, Norway. It was the base of the Østfold Regiment, with defence related responsibilities for the east side of Oslo Fjord.-History:...
were built, including Isegran, Kongsten, and Cicignon. In 1735, a suburb
Suburb
The word suburb mostly refers to a residential area, either existing as part of a city or as a separate residential community within commuting distance of a city . Some suburbs have a degree of administrative autonomy, and most have lower population density than inner city neighborhoods...
on the western side of Glomma, Vestsiden, was founded. This part later grew faster than
the old city, and became the dominant city centre. Most of the buildings in the old city burned down during a fire in 1764.

In the 1840s, timber exporting from Fredrikstad started to gain momentum. In the 1860s, several steam powered saws were built along the river, and in 1879 the railway reached Fredrikstad, leading to further growth. With the decline of the timber exports as a result of the modernization of wood-processing industries in the early 1900s, Fredrikstad's production changed to other types of products. It later became one of Norway's most important industrial centres, famous for its large shipyard
Shipyard
Shipyards and dockyards are places which repair and build ships. These can be yachts, military vessels, cruise liners or other cargo or passenger ships. Dockyards are sometimes more associated with maintenance and basing activities than shipyards, which are sometimes associated more with initial...
, Fredrikstad Mekaniske Verksted.

The following cities are twinned
Town twinning
Twin towns and sister cities are two of many terms used to describe the cooperative agreements between towns, cities, and even counties in geographically and politically distinct areas to promote cultural and commercial ties.- Terminology :...
with Fredrikstad: