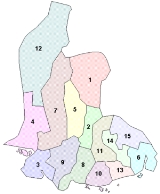 Encyclopedia
In the 16th century, Dutch
Dutch people
The Dutch people are an ethnic group native to the Netherlands. They share a common culture and speak the Dutch language. Dutch people and their descendants are found in migrant communities worldwide, notably in Suriname, Chile, Brazil, Canada, Australia, South Africa, New Zealand, and the United...
merchant vessel
Merchant vessel
A merchant vessel is a ship that transports cargo or passengers. The closely related term commercial vessel is defined by the United States Coast Guard as any vessel engaged in commercial trade or that carries passengers for hire...
s began to visit ports in southern Norway to purchase salmon
Salmon
Salmon is the common name for several species of fish in the family Salmonidae. Several other fish in the same family are called trout; the difference is often said to be that salmon migrate and trout are resident, but this distinction does not strictly hold true...
and other goods. Soon thereafter the export of timber
Lumber
Lumber or timber is wood in any of its stages from felling through readiness for use as structural material for construction, or wood pulp for paper production....
began, as oak
Oak
An oak is a tree or shrub in the genus Quercus , of which about 600 species exist. "Oak" may also appear in the names of species in related genera, notably Lithocarpus...
from southern Norway was exceptionally well suited for shipbuilding
Shipbuilding
Shipbuilding is the construction of ships and floating vessels. It normally takes place in a specialized facility known as a shipyard. Shipbuilders, also called shipwrights, follow a specialized occupation that traces its roots to before recorded history.Shipbuilding and ship repairs, both...
. As the Netherlands
Netherlands
The Netherlands is a constituent country of the Kingdom of the Netherlands, located mainly in North-West Europe and with several islands in the Caribbean. Mainland Netherlands borders the North Sea to the north and west, Belgium to the south, and Germany to the east, and shares maritime borders...
developed in the 18th century, it began to suffer from a severe labor shortage, and many families from Vest-Agder and Aust-Agder emigrated to the Netherlands.

In the 19th century, emigration to the United States
United States
The United States of America is a federal constitutional republic comprising fifty states and a federal district...
started. One of the most important causes of this emigration was the emergence of steamship
Steamboat
A steamboat or steamship, sometimes called a steamer, is a ship in which the primary method of propulsion is steam power, typically driving propellers or paddlewheels...
s. While Vest-Agder and Aust-Agder had historically had very strong positions in the manufacture and repair of sailing ship
Sailing ship
The term sailing ship is now used to refer to any large wind-powered vessel. In technical terms, a ship was a sailing vessel with a specific rig of at least three masts, square rigged on all of them, making the sailing adjective redundant. In popular usage "ship" became associated with all large...
s, the change to steam resulted in very hard times for this industry. Emigration to the United States was a means of escaping from the high unemployment that followed.

On 1 January 1838, all the counties were divided into local administrative units each with their own governments (see formannskapsdistrikt
Formannskapsdistrikt
Formannskapsdistrikt was the name for a Norwegian local self-government districts put into force in 1838. This system of municipality was created in a bill approved by the Storting and signed into law by King Carl Johan on 14 January 1837...
). The number and borders of these municipalities were based on the parish
Parish
A parish is a territorial unit historically under the pastoral care and clerical jurisdiction of one parish priest, who might be assisted in his pastoral duties by a curate or curates - also priests but not the parish priest - from a more or less central parish church with its associated organization...
es of the Church of Norway
Church of Norway
The Church of Norway is the state church of Norway, established after the Lutheran reformation in Denmark-Norway in 1536-1537 broke the ties to the Holy See. The church confesses the Lutheran Christian faith...
. Over time the number and locations of these have changed, and at present there are 15 municipalities in Vest-Agder. The municipality of Åseral
Åseral
Åseral is a municipality in Vest-Agder county, Norway. The administrative center is the village of Kyrkjebygda.The parish of Bjelland had to be divided into two formannskapsdistrikts on 1 January 1838. This is because the main part of Bjelland belonged to the county of Vest-Agder, while the annex...
was part of the neighboring county of Nedenes
Aust-Agder
is a county in Norway, bordering Telemark, Rogaland, and Vest-Agder. In 2002, there were 102,945 inhabitants, which is 2.2% of the total population in Norway. Its area is . The administrative center of the county is in Arendal....
until 1880, when it was moved to Vest-Agder.