Encyclopedia
A vertical-lift bridge or lift bridge is a type of movable bridge in which a span
Span (architecture)
Span is the distance between two intermediate supports for a structure, e.g. a beam or a bridge.A span can be closed by a solid beam or of a rope...
rises vertically while remaining parallel with the deck.

The vertical lift offers several benefits over other movable bridges such as the bascule
Bascule bridge
A bascule bridge is a moveable bridge with a counterweight that continuously balances the span, or "leaf," throughout the entire upward swing in providing clearance for boat traffic....
and swing-span bridge
Swing bridge
A swing bridge is a movable bridge that has as its primary structural support a vertical locating pin and support ring, usually at or near to its centre of gravity, about which the turning span can then pivot horizontally as shown in the animated illustration to the right...
. Generally speaking they cost less to build for longer moveable spans. The counterweights in a vertical lift are only required to be equal to the weight of the deck, whereas bascule bridge counterweights must weigh several times as much as the span being lifted. As a result, heavier materials can be used in the deck, and so this type of bridge is especially suited for heavy railroad use.

Although most vertical-lift bridges use towers, each equipped with counterweights, some use hydraulic jacks located below the deck. An example is the 16 metres (52.5 ft) span bridge at St Paul Avenue in Milwaukee (see also table bridge
Table bridge
A table bridge is a moveable bridge in which the deck moves along the vertical axis. Hydraulic pillars under the bridge raise the bridge deck to allow barge traffic to pass beneath it. In contrast to a lift bridge, where the deck is pulled upwards along towers, the deck of a table bridge is pushed...
s). Another design used balance beams to lift the deck, with pivoting bascules located on the top of the lift towers. An example of this kind was built at La Salle in Illinois, USA.

The biggest disadvantage to the vertical-lift bridge (in comparison with many other designs) is the height restriction for vessels passing under it. This is a result of the deck remaining suspended above the passageway. 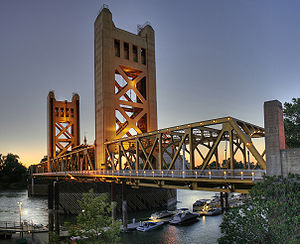