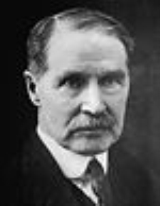 Until 1922, there was no formal "Leader of the Conservative Party". There was a leader of the Conservative party in each of the two Houses, and they were regarded as coequal unless one of them was either the Prime Minister
Prime Minister of the United Kingdom
The Prime Minister of the United Kingdom of Great Britain and Northern Ireland is the Head of Her Majesty's Government in the United Kingdom. The Prime Minister and Cabinet are collectively accountable for their policies and actions to the Sovereign, to Parliament, to their political party and...
or a former Prime Minister, or if a particular crisis (as in 1846–1847 or 1916) had resulted in one clearly asserting authority over the other. In the periods when this was not the case (1881–1885, 1911–1916, 1921–1922) there was no clear "Leader of the Conservative Party"—this contributed to some of the internal party conflict at the time. The distinction of the leaders is often overlooked by many and there are lists in circulation that assume the eventual single leader who emerged after a period of coequal leadership was the leader from the outset. However this was not always the case—for example in 1881 it was widely expected that the Commons leader Sir Stafford Northcote would be the next Conservative Prime Minister
Prime minister
A prime minister is the most senior minister of cabinet in the executive branch of government in a parliamentary system. In many systems, the prime minister selects and may dismiss other members of the cabinet, and allocates posts to members within the government. In most systems, the prime...
, but by the time the party had returned to government in 1885 political developments had resulted in the Lords leader Robert Arthur Talbot Gascoyne-Cecil, 3rd Marquess of Salisbury having the stronger claimant for the premiership.

When the Parliament Act 1911
Parliament Act 1911
The Parliament Act 1911 is an Act of the Parliament of the United Kingdom. It is constitutionally important and partly governs the relationship between the House of Commons and the House of Lords which make up the Houses of Parliament. This Act must be construed as one with the Parliament Act 1949...
reduced the power of the Lords, it seemed likely that the leader in the Commons would be preeminent. But that was not formally recognised for another eleven years, and there were several occasions when members of the Lords were strongly considered for the leadership of the whole party after this time. Since 1922 an overall leader has been formally elected by a joint meeting of MPs, peers, and prospective parliamentary candidate
Prospective parliamentary candidate
Prospective parliamentary candidate is a term used in British politics to refer to candidates selected by political parties to fight individual constituencies in advance of a general election. This terminology was motivated by the strict limits on the amount of expenses incurred by an actual...
s, even when the party is in opposition. Until 1965 this election was a rubber-stamp
Rubber stamp (politics)
A rubber stamp, as a political metaphor, refers to a person or institution with considerable de jure power but little de facto power; one that rarely disagrees with more powerful organs....
for the individual who had already been asked by the monarch to form a government; the leadership did not fall vacant at any time when the party was in opposition during this period. Since 1965 a succession of ballots have been held in to choose between competing candidates. This was instigated by Alec Douglas-Home
Alec Douglas-Home
Alexander Frederick Douglas-Home, Baron Home of the Hirsel, KT, PC , known as The Earl of Home from 1951 to 1963 and as Sir Alec Douglas-Home from 1963 to 1974, was a British Conservative politician who served as Prime Minister of the United Kingdom from October 1963 to October 1964.He is the last...
in 1964 after the confused circumstances of his own elevation in 1963.


Leaders in the House of Lords 1834–present

Those asterisked were considered the overall leader of the party.

Those asterisked were considered the overall leader of the party.

Overall Leader of the Conservative Party 1834–1922


Leader of the Conservative Party 1922–present