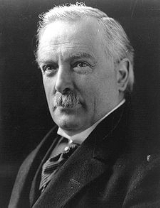 During a long tenure of office, mainly as Chancellor of the Exchequer
Chancellor of the Exchequer
The Chancellor of the Exchequer is the title held by the British Cabinet minister who is responsible for all economic and financial matters. Often simply called the Chancellor, the office-holder controls HM Treasury and plays a role akin to the posts of Minister of Finance or Secretary of the...
, he was a key figure in the introduction of many reforms which laid the foundations of the modern welfare state
Welfare state
A welfare state is a "concept of government in which the state plays a key role in the protection and promotion of the economic and social well-being of its citizens. It is based on the principles of equality of opportunity, equitable distribution of wealth, and public responsibility for those...
.

The House of Lords is not the watchdog of the constitution; it is Mr Arthur Balfour|Balfour’s poodle. It fetches and carries for him. It barks for him. It bites anyone that he sets it on to.

The Landlord is a gentleman ... who does not earn his wealth. He has a host of agents and clerks that receive for him. He does not even take the trouble to spend his wealth. He has a host of people around him to do the actual spending. He never sees it until he comes to enjoy it. His sole function, his chief pride, is the stately consumption of wealth produced by others.

A fully equipped Duke costs as much to keep up as two Dreadnoughts, and Dukes are just as great a terror, and they last longer.

The question will be asked whether five hundred men, ordinary men, chosen accidentally from among the unemployed, should override the judgment of millions of people who are engaged in the industry which makes the wealth of the country.

On the peers of the House of Lords, in a speech in Newcastle (9 October 1909)

Four spectres haunt the Poor — Old Age, Accident, Sickness and Unemployment. We are going to exorcise them. We are going to drive hunger from the hearth. We mean to banish the workhouse from the horizon of every workman in the land.

The stern hand of fate has scourged us to an elevation where we can see the great everlasting things which matter for a nation — the great peaks we had forgotten, of Honor, Duty, Patriotism, and clad in glittering white, the great pinnacle of Sacrifice pointing like a rugged finger to Heaven.

At eleven o’clock this morning came to an end the cruellest and most terrible War that has ever scourged mankind. I hope we may say that thus, this fateful morning, came to an end all wars.