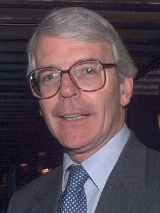 Despite Thatcher's "notorious" assertion that "she expected to continue in control as a backseat driver," Major's mild and consensual style was seen as complete contrast to Thatcher's forceful and confrontational manner.

In the next ten years we will have to continue to make changes which will make the whole of this country a genuinely classless society.

'Being Prime Minister, I had to bite my tongue over a great many things. My hatred of Rangers Football club was one. My love of the little man on the front of Monopoly-boxes another.'

I am walking over hot coals suspended over a deep pit at the bottom of which are a large number of vipers baring their fangs.