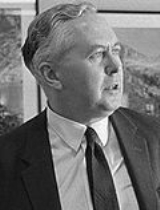 Harold Wilson first served as Prime Minister in the 1960s, during a period of low unemployment and relative economic prosperity (though also of significant problems with the UK's external balance of payments).

On 5 September, when the Trades Union Congress|TUC unanimously rejected wage restraint, it was the end of an era, and all the financiers, all the little gnomes in Zürich and other finance centres about whom we keep on hearing, had started to make their dispositions in regard to sterling.

The government have only a small majority in the House of Commons. I want to make it quite clear that this will not affect our ability to govern. Having been charged with the duties of Government we intend to carry out those duties.

I know I speak for everyone in these islands, all parties, all our people, when I say to Ian Smith|Mr. Smith tonight: "Prime Minister, think again".

Broadcast speech calling on the Government of Rhodesia|Rhodesia not to Unilateral Declaration of Independence (Rhodesia)|declare independence, October 12, 1965. Quoted in The Times, October 13, 1965, p. 8.

We have taken steps which have not been taken by any other democratic government in the world. We are taking steps with regard to prices and wages which no other government, even in wartime, has taken.

From now on, the pound abroad is worth 14 per cent or so less in terms of other currencies. That doesn't mean, of course, that the Pound here in Britain, in your pocket or purse or in your bank, has been devalued.

Televised speech, November 19, 1967 following the devaluation of the Pound sterling|Pound Sterling. Usually remembered as "the Pound in your pocket".

May I say, for the benefit of those who have been carried away by the gossip of the last few days, that I know what's going on. [pause] I'm going on, and the Labour government's going on.