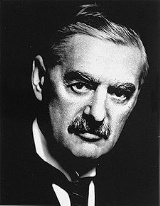 Overview
Arthur Neville Chamberlain FRS (18 March 1869 – 9 November 1940) was a British Conservative
Conservative Party (UK)
The Conservative Party, formally the Conservative and Unionist Party, is a centre-right political party in the United Kingdom that adheres to the philosophies of conservatism and British unionism. It is the largest political party in the UK, and is currently the largest single party in the House...
politician
Politician
A politician, political leader, or political figure is an individual who is involved in influencing public policy and decision making...
who served as Prime Minister of the United Kingdom
Prime Minister of the United Kingdom
The Prime Minister of the United Kingdom of Great Britain and Northern Ireland is the Head of Her Majesty's Government in the United Kingdom. The Prime Minister and Cabinet are collectively accountable for their policies and actions to the Sovereign, to Parliament, to their political party and...
from May 1937 to May 1940. Chamberlain is best known for his appeasement
Appeasement
The term appeasement is commonly understood to refer to a diplomatic policy aimed at avoiding war by making concessions to another power. Historian Paul Kennedy defines it as "the policy of settling international quarrels by admitting and satisfying grievances through rational negotiation and...
foreign policy, and in particular for his signing of the Munich Agreement
Munich Agreement
The Munich Pact was an agreement permitting the Nazi German annexation of Czechoslovakia's Sudetenland. The Sudetenland were areas along Czech borders, mainly inhabited by ethnic Germans. The agreement was negotiated at a conference held in Munich, Germany, among the major powers of Europe without...
in 1938, conceding the Sudetenland
Sudetenland
Sudetenland is the German name used in English in the first half of the 20th century for the northern, southwest and western regions of Czechoslovakia inhabited mostly by ethnic Germans, specifically the border areas of Bohemia, Moravia, and those parts of Silesia being within Czechoslovakia.The...
region of Czechoslovakia
Czechoslovakia
Czechoslovakia or Czecho-Slovakia was a sovereign state in Central Europe which existed from October 1918, when it declared its independence from the Austro-Hungarian Empire, until 1992...
to Germany
Nazi Germany
Nazi Germany , also known as the Third Reich , but officially called German Reich from 1933 to 1943 and Greater German Reich from 26 June 1943 onward, is the name commonly used to refer to the state of Germany from 1933 to 1945, when it was a totalitarian dictatorship ruled by...
. When Adolf Hitler
Adolf Hitler
Adolf Hitler was an Austrian-born German politician and the leader of the National Socialist German Workers Party , commonly referred to as the Nazi Party). He was Chancellor of Germany from 1933 to 1945, and head of state from 1934 to 1945...
continued his aggression by invading Poland, Britain declared war on Germany on 3 September 1939, and Chamberlain led Britain through the first eight months of the Second World War.

After working in business and local government and after a short spell as Director of National Service
Director of National Service
The Director of National Service was a post that existed briefly in the British government. Although a political appointment, the initial holder was Neville Chamberlain who was not a Member of Parliament at the time...
in 1916 and 1917, Chamberlain followed his father
Joseph Chamberlain
Joseph Chamberlain was an influential British politician and statesman. Unlike most major politicians of the time, he was a self-made businessman and had not attended Oxford or Cambridge University....
and older half-brother
Austen Chamberlain
Sir Joseph Austen Chamberlain, KG was a British statesman, recipient of the Nobel Peace Prize and half-brother of Neville Chamberlain.- Early life and career :...
in becoming a Member of Parliament
Member of Parliament
A Member of Parliament is a representative of the voters to a :parliament. In many countries with bicameral parliaments, the term applies specifically to members of the lower house, as upper houses often have a different title, such as senate, and thus also have different titles for its members,...
in the 1918 general election
United Kingdom general election, 1918
The United Kingdom general election of 1918 was the first to be held after the Representation of the People Act 1918, which meant it was the first United Kingdom general election in which nearly all adult men and some women could vote. Polling was held on 14 December 1918, although the count did...
at age 49.

Without underrating the hardships of our situation, the long tragedy of the unemployed, the grievous burden of taxation, the arduous and painful struggle of those engaged in trade and industry, at any rate we are free from that fear which besets so many less fortunately placed, the fear that things are going to get worse. We owe our freedom from that fear to the fact that we have balanced our budget.

In war, whichever side may call itself the victor, there are no winners, but all are losers.

How horrible, fantastic, incredible it is that we should be digging trenches and trying on gas-masks here because of a quarrel in a far away country between people of whom we know nothing. It seems still more impossible that a quarrel which has already been settled in principle should be the subject of war.

Armed conflict between nations is a nightmare to me, but if I were convinced that any nation had made up its mind to dominate the world by fear of its force I should feel it should be resisted.

No doubt the Jews aren't a lovable people; I don't care about them myself; but that is not sufficient to explain the Pogrom|Pogrom.