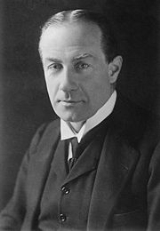 A lot of hard-faced men who look as if they had done very well out of the war.

Of the new MPs elected in 1918; quoted by John Maynard Keynes in Economic Consequences of the Peace, Ch. 5

If I did not believe that our work was done in the faith and hope that at some day, it may be a million years hence, the Kingdom of God|Kingdom of God will spread over the whole world, I would have no hope, I could do no work, and I would give my office over this morning to anyone who would take it.

Tom Mosley is a cad and a wrong 'un and they will find it out.

What the proprietorship of these papers is aiming at is power, and power without responsibility — the prerogative of the harlot through the ages.

I think it well ... for the man in the street to realise that there is no power on earth that can protect him from being bombed. Whatever people may tell him, the bomber will always get through. The only defence is offence, which means that you will have to kill women and children more quickly than the enemy if you want to save yourselves.