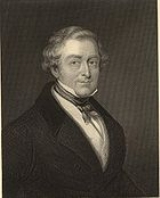 Overview
Sir Robert Peel, 2nd Baronet (5 February 17882 July 1850) was a British Conservative
Conservative Party (UK)
The Conservative Party, formally the Conservative and Unionist Party, is a centre-right political party in the United Kingdom that adheres to the philosophies of conservatism and British unionism. It is the largest political party in the UK, and is currently the largest single party in the House...
statesman
Statesman
A statesman is usually a politician or other notable public figure who has had a long and respected career in politics or government at the national and international level. As a term of respect, it is usually left to supporters or commentators to use the term...
who served as Prime Minister of the United Kingdom
Prime Minister of the United Kingdom
The Prime Minister of the United Kingdom of Great Britain and Northern Ireland is the Head of Her Majesty's Government in the United Kingdom. The Prime Minister and Cabinet are collectively accountable for their policies and actions to the Sovereign, to Parliament, to their political party and...
from 10 December 1834 to 8 April 1835, and again from 30 August 1841 to 29 June 1846. While Home Secretary
Home Secretary
The Secretary of State for the Home Department, commonly known as the Home Secretary, is the minister in charge of the Home Office of the United Kingdom, and one of the country's four Great Offices of State...
, Peel helped create the modern concept of the police
Police
The police is a personification of the state designated to put in practice the enforced law, protect property and reduce civil disorder in civilian matters. Their powers include the legitimized use of force...
force, leading to officers being known as "bobbies" (in England) and "Peelers" (in Ireland). While Prime Minister, Peel repealed the Corn Laws
Corn Laws
The Corn Laws were trade barriers designed to protect cereal producers in the United Kingdom of Great Britain and Ireland against competition from less expensive foreign imports between 1815 and 1846. The barriers were introduced by the Importation Act 1815 and repealed by the Importation Act 1846...
and issued the Tamworth Manifesto
Tamworth Manifesto
The Tamworth Manifesto was a political manifesto issued by Sir Robert Peel in 1834 in Tamworth, which is widely credited by historians as having laid down the principles upon which the modern British Conservative Party is based....
, leading to the formation of the Conservative Party out of the shattered Tory Party.
Peel was born in Bury
Bury
Bury is a town in Greater Manchester, England. It lies on the River Irwell, east of Bolton, west-southwest of Rochdale, and north-northwest of the city of Manchester...
, Lancashire
Lancashire
Lancashire is a non-metropolitan county of historic origin in the North West of England. It takes its name from the city of Lancaster, and is sometimes known as the County of Lancaster. Although Lancaster is still considered to be the county town, Lancashire County Council is based in Preston...
, England, United Kingdom to the industrialist and Member of Parliament Sir Robert Peel, 1st Baronet
Sir Robert Peel, 1st Baronet
Sir Robert Peel, 1st Baronet , was a British politician and industrialist and one of early textile manufacturers of the Industrial Revolution...
.

I feel and know that the Repeal [of the Act of Union 1801] must lead to the dismemberment of this great empire; must make Great Britain a fourth-rate power in Europe, and Ireland a savage wilderness.

If the spirit of the Reform Bill implies merely, a careful review of institutions, civil and ecclesiastical, undertaken in a friendly temper, combining, with the firm maintenance of established rights, the correction of proved abuses, and the redress of real grievances,&mdash;in that case, I can for myself and colleagues undertake to act in such a spirit and with such intentions.

I have read all that has been written by the gravest authorities on political economy on the subject of rent, wages, taxes, tithes.

I shall leave a name execrated by every monopolist...but it may be...sometimes remembered with expressions of goodwill in the abodes of those whose lot it is to labour and to earn their daily bread in the sweat of their brow, when they shall recruit their exhausted strength with abundant and untaxed food, the sweeter because it is no longer leavened by a sense of injustice.

Resignation speech in the House of Commons after the repeal of the Corn Laws (29 June, 1846).
More
x