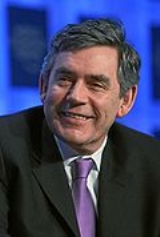 Our new economic approach is rooted in ideas which stress the importance of macro-economics, post neo-classical endogenous growth theory and the symbiotic relationships between growth and investment, and people and infrastructure.

My first rule &ndash; the golden rule &ndash; ensures that over the economic cycle the Government will borrow only to invest, and that current spending will be met from taxation.

I said that this would be a Budget based on prudence for a purpose and that guides us also in our approach to public spending.

Politics seems much less important today. When you see your young daughter smiling as she was, and moving around, it's a superb feeling.

I'm here &ndash; but I haven't been given permission to drive.

I understand that in the UK there have already been 10,000 complaints from viewers about these remarks, which people see, rightly, as offensive. I want Britain to be seen as a country of fairness and tolerance. Anything detracting from this I condemn.

It is time to train British workers for the British jobs that will be available over the coming few years and to make sure that people who are inactive and unemployed are able to get the new jobs on offer in our country.