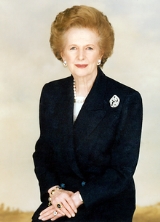 Hi, I'm going to have my thesis on "UK’s withdrawal from a full membership in the European Union due to Thatcher government’s political and economi...
More

Who was the American Secretary of State during the Falkland war?

Am I going completely mad or did I read at the height of Thatcher's power, she frequently used a 12volt car battery, either while she bathed or in som...
More

My job is to stop Britain going red.

I can't bear Britain in decline. I just can't.