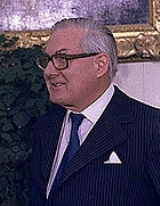 Callaghan was Chancellor of the Exchequer
Chancellor of the Exchequer
The Chancellor of the Exchequer is the title held by the British Cabinet minister who is responsible for all economic and financial matters. Often simply called the Chancellor, the office-holder controls HM Treasury and plays a role akin to the posts of Minister of Finance or Secretary of the...
from 1964 to 1967 during a turbulent period in the British economy in which he had to wrestle with a balance of payments
Balance of payments
Balance of payments accounts are an accounting record of all monetary transactions between a country and the rest of the world.These transactions include payments for the country's exports and imports of goods, services, financial capital, and financial transfers...
deficit and speculative attacks on the pound sterling
Pound sterling
The pound sterling , commonly called the pound, is the official currency of the United Kingdom, its Crown Dependencies and the British Overseas Territories of South Georgia and the South Sandwich Islands, British Antarctic Territory and Tristan da Cunha. It is subdivided into 100 pence...
.

Never let me hear anyone say again that a Socialist State cannot provide outlets for those with initiative. The rewards given to ability in the U.S.S.R. at all levels are far greater than those given to the employed in capitalist Britain. I have seen it and it works.

I have not the slightest doubt that the economic measures and the Socialist measures which one will find in the countries of Eastern Europe, will become increasingly powerful against the unco-ordinated, planless society in which the West is living at present.

I hate putting up taxes.

Those who advocate devaluation are calling for a reduction in the wage levels and the real wage standards of every member of the working class.

If we have to prove our Europeanism by accepting that French is the dominant language in the Community, then my answer is quite clear, and I will say it in French in order to prevent any misunderstanding: Non, merci beaucoup.

First of all, please make sure that you go and vote in the Common Market referendum on Thursday. And secondly, the Government asks you to vote 'Yes', clearly and unmistakeably.

But the policies of the 1960s would not be successful today. No more would general import controls.They benefit some home industries at the expense of the livelihood of everyone working in exports. We would be robbing Peter to pay Paul.

When we reject unemployment as an economic instrument &mdash; as we do &mdash; and when we reject also superficial remedies, as socialists must, then we must ask ourselves unflinchingly what is the cause of high unemployment. Quite simply and unequivocally, it is caused by paying ourselves more than the value of what we produce. There are no scapegoats.