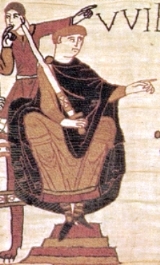 Overview
William I also known as William the Conqueror (Guillaume le Conquérant), was the first Norman
Normans
The Normans were the people who gave their name to Normandy, a region in northern France. They were descended from Norse Viking conquerors of the territory and the native population of Frankish and Gallo-Roman stock...
King of England from Christmas 1066 until his death. He was also Duke of Normandy
Duke of Normandy
The Duke of Normandy is the title of the reigning monarch of the British Crown Dependancies of the Bailiwick of Guernsey and the Bailiwick of Jersey. The title traces its roots to the Duchy of Normandy . Whether the reigning sovereign is a male or female, they are always titled as the "Duke of...
from 3 July 1035 until his death, under the name William II. Before his conquest of England, he was known as William the Bastard because of the illegitimacy of his birth.

To press his claim to the English crown, William invaded England in 1066, leading an army of Normans
Normans
The Normans were the people who gave their name to Normandy, a region in northern France. They were descended from Norse Viking conquerors of the territory and the native population of Frankish and Gallo-Roman stock...
, Bretons, Flemings, and Frenchmen (from Paris and Île-de-France
Île-de-France (province)
The province of Île-de-France or Isle de France is an historical province of France, and the one at the centre of power during most of French history...
) to victory over the English forces of King Harold Godwinson
Harold Godwinson
Harold Godwinson was the last Anglo-Saxon King of England.It could be argued that Edgar the Atheling, who was proclaimed as king by the witan but never crowned, was really the last Anglo-Saxon king...
at the Battle of Hastings
Battle of Hastings
The Battle of Hastings occurred on 14 October 1066 during the Norman conquest of England, between the Norman-French army of Duke William II of Normandy and the English army under King Harold II...
, and suppressed subsequent English revolts in what has become known as the Norman Conquest
Norman conquest of England
The Norman conquest of England began on 28 September 1066 with the invasion of England by William, Duke of Normandy. William became known as William the Conqueror after his victory at the Battle of Hastings on 14 October 1066, defeating King Harold II of England...
.

William of Malmesbury
William of Malmesbury
William of Malmesbury was the foremost English historian of the 12th century. C. Warren Hollister so ranks him among the most talented generation of writers of history since Bede, "a gifted historical scholar and an omnivorous reader, impressively well versed in the literature of classical,...
, the foremost historian of the day, reported of William: "He was of just stature, extraordinary corpulence, fierce countenance; his forehead bare of hair; of such strength of arm that it was often a matter of surprise that no one was able to draw his bow, which he himself could bend when his horse was on full gallop; he was majestic whether sitting or standing, although the protuberance of his belly deformed his royal person: of excellent health so that he was never confined with any dangerous disorder except at the last."

His heavy taxes, together with the exactions of the greedy Norman landlords he put in power, reduced the great mass of Anglo-Saxon freemen to serfdom.

How did the English resist William the Conqueror?

What reforms did William institute?

See, I have taken England with both my hands.

When he stepped off his ship on the coast of England and fell on his face in the sand (28 September, 1066)
More
x