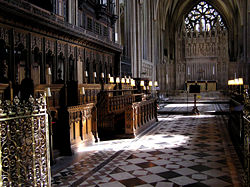 Architecturally, the choir (Anglican alt. spelling quire) is the area of a church or cathedral
Cathedral
A cathedral is a Christian church that contains the seat of a bishop...
, usually in the western part of the chancel
Chancel
In church architecture, the chancel is the space around the altar in the sanctuary at the liturgical east end of a traditional Christian church building...
between the nave
Nave
In Romanesque and Gothic Christian abbey, cathedral basilica and church architecture, the nave is the central approach to the high altar, the main body of the church. "Nave" was probably suggested by the keel shape of its vaulting...
and the sanctuary (which houses the altar
Altar
An altar is any structure upon which offerings such as sacrifices are made for religious purposes. Altars are usually found at shrines, and they can be located in temples, churches and other places of worship...
). The choir is occasionally located in the eastern part of the nave. In some monastic churches the choir occupies the western end of the nave and thus counterbalances the chancel and sanctuary.

The back-choir or retro-choir is a space behind the high altar in the choir
Choir
A choir, chorale or chorus is a musical ensemble of singers. Choral music, in turn, is the music written specifically for such an ensemble to perform.A body of singers who perform together as a group is called a choir or chorus...
of a church, in which there is a small altar standing back to back with the other. 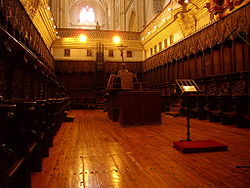 In the Early Church the sanctuary was connected directly to the nave. Choir was simply the east part of the nave, and was fenced off by low railing, called cancelli, from which we get our English word chancel
Chancel
In church architecture, the chancel is the space around the altar in the sanctuary at the liturgical east end of a traditional Christian church building...
. The development of the architectural feature known as the choir is the result of the liturgical
Liturgy
Liturgy is either the customary public worship done by a specific religious group, according to its particular traditions or a more precise term that distinguishes between those religious groups who believe their ritual requires the "people" to do the "work" of responding to the priest, and those...
development brought about by the end of persecutions under Constantine the Great and the rise of monasticism
Monasticism
Monasticism is a religious way of life characterized by the practice of renouncing worldly pursuits to fully devote one's self to spiritual work...
. The word "choir" is first used by writers of the Western Church. Isidore of Seville
Isidore of Seville
Saint Isidore of Seville served as Archbishop of Seville for more than three decades and is considered, as the historian Montalembert put it in an oft-quoted phrase, "le dernier savant du monde ancien"...
and Honorius of Autun write that the term is derived from the "corona
Corona (disambiguation)
A corona is the outer atmosphere of a star.Corona may also refer to:-Astronomy and space science:* Corona , a large ovoid planetary feature* Corona , a 1959–72 United States reconnaissance satellite program-Biology:...
", the circle of clergy or singers who surrounded the altar.

When first introduced, the choir was attached to the bema
Bema
The Bema means a raised platform...
, the elevated platform in the center of the nave on which were placed seats for the higher clergy and a lectern
Lectern
A lectern is a reading desk with a slanted top, usually placed on a stand or affixed to some other form of support, on which documents or books are placed as support for reading aloud, as in a scripture reading, lecture, or sermon...
for scripture readings. This arrangement can still be observed at the Basilica
Basilica
The Latin word basilica , was originally used to describe a Roman public building, usually located in the forum of a Roman town. Public basilicas began to appear in Hellenistic cities in the 2nd century BC.The term was also applied to buildings used for religious purposes...
of St. Mary Major in Rome. Over time, the bema (or presbytery
Presbytery (architecture)
The presbytery is the name for an area in a church building which is reserved for the clergy.In the oldest church it is separated by short walls, by small columns and pilasters in the Renaissance ones; it can also be raised, being reachable by a few steps, usually with railings....
) and choir moved eastward to their current position. In some churches the choir is arranged in the apse
Apse
In architecture, the apse is a semicircular recess covered with a hemispherical vault or semi-dome...
behind the altar
Altar
An altar is any structure upon which offerings such as sacrifices are made for religious purposes. Altars are usually found at shrines, and they can be located in temples, churches and other places of worship...
.

Some European cathedral
Cathedral
A cathedral is a Christian church that contains the seat of a bishop...
s have a retro-choir behind the High Altar, opening eastward towards the chapel
Chapel
A chapel is a building used by Christians as a place of fellowship and worship. It may be part of a larger structure or complex, such as a church, college, hospital, palace, prison or funeral home, located on board a military or commercial ship, or it may be an entirely free-standing building,...
s (chantries
Chantry
Chantry is the English term for a fund established to pay for a priest to celebrate sung Masses for a specified purpose, generally for the soul of the deceased donor. Chantries were endowed with lands given by donors, the income from which maintained the chantry priest...
) in the eastern extremity.

The architectural details of the choir developed in response to its function as the place where the Divine Office
Liturgy of the hours
The Liturgy of the Hours or Divine Office is the official set of daily prayers prescribed by the Catholic Church to be recited at the canonical hours by the clergy, religious orders, and laity. The Liturgy of the Hours consists primarily of psalms supplemented by hymns and readings...
was chanted by the monastic brotherhood or the chapter
Chapter house
A chapter house or chapterhouse is a building or room attached to a cathedral or collegiate church in which meetings are held. They can also be found in medieval monasteries....
of canons
Canon (priest)
A canon is a priest or minister who is a member of certain bodies of the Christian clergy subject to an ecclesiastical rule ....
.

The pulpit
Pulpit
Pulpit is a speakers' stand in a church. In many Christian churches, there are two speakers' stands at the front of the church. Typically, the one on the left is called the pulpit...
and lectern
Lectern
A lectern is a reading desk with a slanted top, usually placed on a stand or affixed to some other form of support, on which documents or books are placed as support for reading aloud, as in a scripture reading, lecture, or sermon...
are also particular to this area of the church. There may also be another free-standing lectern in the center of the isle, facing towards the sanctuary. The organ may be located here, or in a loft elsewhere in the church. 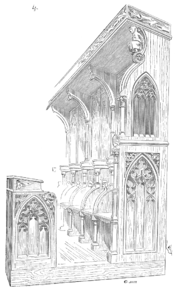 The choir area is occupied by sometimes finely carved and decorated wooden seats known as choir stalls, where the members of the choir
Choir
A choir, chorale or chorus is a musical ensemble of singers. Choral music, in turn, is the music written specifically for such an ensemble to perform.A body of singers who perform together as a group is called a choir or chorus...
sit, stand or kneel during services. The choir may be furnished either with long benches (pew
Pew
A pew is a long bench seat or enclosed box used for seating members of a congregation or choir in a church, or sometimes in a courtroom.-Overview:Churches were not commonly furnished with permanent pews before the Protestant Reformation...
s) or individual choir stalls. There may be several rows of seating running parallel to the walls of the church.

The use of choir stalls (as opposed to benches) is more traditional in monasteries and collegiate church
Collegiate church
In Christianity, a collegiate church is a church where the daily office of worship is maintained by a college of canons; a non-monastic, or "secular" community of clergy, organised as a self-governing corporate body, which may be presided over by a dean or provost...
es. Monastic choir stalls are often fitted with seats that fold up when the monastics stand and fold down when they sit. Often the hinged seat will have a misericord
Misericord
A misericord is a small wooden shelf on the underside of a folding seat in a church, installed to provide a degree of comfort for a person who has to stand during long periods of prayer.-Origins:...
(small wooden seat) on the underside on which he can lean while standing during the long services. The upper part of the monk's stall is so shaped as to provide a headrest while sitting, and arm rests when standing. Monasteries will often have strict rules as to when the monastics may sit and when they must stand during the services.

Choir benches are more common in parish church
Parish church
A parish church , in Christianity, is the church which acts as the religious centre of a parish, the basic administrative unit of episcopal churches....
es. Each bench may have padded kneeler
Kneeler
Kneeler is a piece of furniture used for resting in a kneeling position.-Prayer kneeler:In many churches, pews are equipped with kneelers in front of the seating bench so members of the congregation can kneel on them instead of the floor...
s attached to the back of it so that the person behind may kneel at the appropriate times during services. The front row will often have a long prie-dieu
Prie-dieu
A prie-dieu is a type of prayer desk primarily intended for private devotional use, but also often found in churches of the European continent. It is a small ornamental wooden desk furnished with a sloping shelf for books, and a cushioned pad on which to kneel. Sometimes, instead of the sloping...
running in front of it for the choir members to place their books on, and which may also be fitted with kneelers.

In a cathedral, the bishop's throne or cathedra
Cathedra
A cathedra or bishop's throne is the chair or throne of a bishop. It is a symbol of the bishop's teaching authority in the Catholic Church and the Orthodox Church, and has in some sense remained such in the Anglican Communion and in Lutheran churches...
is usually located in this space.