Conditions of the award

The Fields Medal is often described as the "Nobel Prize of Mathematics" for the prestige it carries, though in most other ways the relatively new Abel Prize
Abel Prize
The Abel Prize is an international prize presented annually by the King of Norway to one or more outstanding mathematicians. The prize is named after Norwegian mathematician Niels Henrik Abel . It has often been described as the "mathematician's Nobel prize" and is among the most prestigious...
is a more direct analogue. In contrast with the Nobel Prize, the Fields Medal is awarded only every four years. The Medal also has an age limit: a recipient's 40th birthday must not occur before January 1 of the year in which the Fields Medal is awarded. As a result some great mathematicians have missed it by having done their best work (or having had their work recognized) too late in life. The 40-year rule is based on Fields' desire that


... while it was in recognition of work already done, it was at the same time intended to be an encouragement for further achievement on the part of the recipients and a stimulus to renewed effort on the part of others.

The monetary award is much lower than the roughly US$1.5 million given with each Nobel prize. Other major awards in mathematics, such as the Abel Prize
Abel Prize
The Abel Prize is an international prize presented annually by the King of Norway to one or more outstanding mathematicians. The prize is named after Norwegian mathematician Niels Henrik Abel . It has often been described as the "mathematician's Nobel prize" and is among the most prestigious...
and the Chern Medal, have a large monetary prize like a Nobel.

In 1970, Sergei Novikov, due to restrictions placed on him by the Soviet government, was unable to travel to the congress in Nice
Nice
Nice is the fifth most populous city in France, after Paris, Marseille, Lyon and Toulouse, with a population of 348,721 within its administrative limits on a land area of . The urban area of Nice extends beyond the administrative city limits with a population of more than 955,000 on an area of...
to receive his medal.

In 1978, Grigory Margulis
Grigory Margulis
Gregori Aleksandrovich Margulis is a Russian mathematician known for his far-reaching work on lattices in Lie groups, and the introduction of methods from ergodic theory into diophantine approximation. He was awarded a Fields Medal in 1978 and a Wolf Prize in Mathematics in 2005, becoming the...
, due to restrictions placed on him by the Soviet government, was unable to travel to the congress in Helsinki
Helsinki
Helsinki is the capital and largest city in Finland. It is in the region of Uusimaa, located in southern Finland, on the shore of the Gulf of Finland, an arm of the Baltic Sea. The population of the city of Helsinki is , making it by far the most populous municipality in Finland. Helsinki is...
to receive his medal. The award was accepted on his behalf by Jacques Tits
Jacques Tits
Jacques Tits is a Belgian and French mathematician who works on group theory and geometry and who introduced Tits buildings, the Tits alternative, and the Tits group.- Career :Tits received his doctorate in mathematics at the age of 20...
, who said in his address: "I cannot but express my deep disappointment — no doubt shared by many people here — in the absence of Margulis from this ceremony. In view of the symbolic meaning of this city of Helsinki, I had indeed grounds to hope that I would have a chance at last to meet a mathematician whom I know only through his work and for whom I have the greatest respect and admiration."

In 1982, the congress was due to be held in Warsaw
Warsaw
Warsaw is the capital and largest city of Poland. It is located on the Vistula River, roughly from the Baltic Sea and from the Carpathian Mountains. Its population in 2010 was estimated at 1,716,855 residents with a greater metropolitan area of 2,631,902 residents, making Warsaw the 10th most...
but had to be rescheduled to the next year, due to martial law
Martial law in Poland
Martial law in Poland refers to the period of time from December 13, 1981 to July 22, 1983, when the authoritarian government of the People's Republic of Poland drastically restricted normal life by introducing martial law in an attempt to crush political opposition to it. Thousands of opposition...
introduced in Poland Dec. 13, 1981. The awards were announced at the ninth General Assembly of the IMU earlier in the year and awarded at the 1983 Warsaw congress.

In 1990, Edward Witten
Edward Witten
Edward Witten is an American theoretical physicist with a focus on mathematical physics who is currently a professor of Mathematical Physics at the Institute for Advanced Study....
became the first and so far only physicist
Physicist
A physicist is a scientist who studies or practices physics. Physicists study a wide range of physical phenomena in many branches of physics spanning all length scales: from sub-atomic particles of which all ordinary matter is made to the behavior of the material Universe as a whole...
to win this award.

In 1998, at the ICM, Andrew Wiles
Andrew Wiles
Sir Andrew John Wiles KBE FRS is a British mathematician and a Royal Society Research Professor at Oxford University, specializing in number theory...
was presented by the chair of the Fields Medal Committee, Yuri I. Manin
Yuri I. Manin
Yuri Ivanovitch Manin is a Soviet/Russian/German mathematician, known for work in algebraic geometry and diophantine geometry, and many expository works ranging from mathematical logic to theoretical physics.-Biography:...
, with the first-ever IMU silver plaque in recognition of his proof of Fermat's Last Theorem
Fermat's Last Theorem
In number theory, Fermat's Last Theorem states that no three positive integers a, b, and c can satisfy the equation an + bn = cn for any integer value of n greater than two....
. Don Zagier
Don Zagier
Don Bernard Zagier is an American mathematician whose main area of work is number theory. He is currently one of the directors of the Max Planck Institute for Mathematics in Bonn, Germany, and a professor at the Collège de France in Paris, France.He was born in Heidelberg, Germany...
referred to the plaque as a "quantized Fields Medal". Accounts of this award frequently make reference that at the time of the award Wiles was over the age limit for the Fields medal. Although Wiles was slightly over the age limit in 1994, he was thought to be a favorite to win the medal; however, a gap (later resolved by Taylor
Richard Taylor (mathematician)
-External links:**...
and Wiles) in the proof was found in 1993.

In 2006, Grigori Perelman
Grigori Perelman
Grigori Yakovlevich Perelman is a Russian mathematician who has made landmark contributions to Riemannian geometry and geometric topology.In 1992, Perelman proved the soul conjecture. In 2002, he proved Thurston's geometrization conjecture...
, who proved the Poincaré conjecture
Poincaré conjecture
In mathematics, the Poincaré conjecture is a theorem about the characterization of the three-dimensional sphere , which is the hypersphere that bounds the unit ball in four-dimensional space...
, refused his Fields Medal and did not attend the congress. 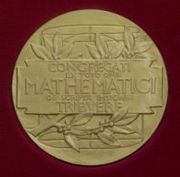 Translation: "Mathematicians gathered from the entire world awarded [understood "the winners"] for their outstanding writings."

In the background, there is the representation of Archimedes' tomb, with the carving illustrating his theorem on the sphere and the cylinder, behind a branch. (This is the mathematical result of which Archimedes was reportedly most proud: Given a sphere and a circumscribed cylinder of the same height and diameter, the ratio between their volumes is equal to 2/3.)

The rim bears the name of the prizewinner.