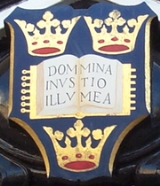 Overview
The University of Oxford (informally Oxford University or Oxford) is a university located in Oxford
Oxford
The city of Oxford is the county town of Oxfordshire, England. The city, made prominent by its medieval university, has a population of just under 165,000, with 153,900 living within the district boundary. It lies about 50 miles north-west of London. The rivers Cherwell and Thames run through...
, United Kingdom
United Kingdom
The United Kingdom of Great Britain and Northern IrelandIn the United Kingdom and Dependencies, other languages have been officially recognised as legitimate autochthonous languages under the European Charter for Regional or Minority Languages...
. It is the second-oldest surviving university in the world and the oldest in the English-speaking world
English-speaking world
The English-speaking world consists of those countries or regions that use the English language to one degree or another. For more information, please see:Lists:* List of countries by English-speaking population...
. Although its exact date of foundation is unclear, there is evidence of teaching as far back as 1096. The University grew rapidly from 1167 when Henry II
Henry II of England
Henry II ruled as King of England , Count of Anjou, Count of Maine, Duke of Normandy, Duke of Aquitaine, Duke of Gascony, Count of Nantes, Lord of Ireland and, at various times, controlled parts of Wales, Scotland and western France. Henry, the great-grandson of William the Conqueror, was the...
banned English students from attending the University of Paris
University of Paris
The University of Paris was a university located in Paris, France and one of the earliest to be established in Europe. It was founded in the mid 12th century, and officially recognized as a university probably between 1160 and 1250...
.
In post-nominals
Post-nominal letters
Post-nominal letters, also called post-nominal initials, post-nominal titles or designatory letters, are letters placed after the name of a person to indicate that the individual holds a position, educational degree, accreditation, office, or honour. An individual may use several different sets of...
, the University of Oxford was historically abbreviated as Oxon. (from the Latin Oxoniensis), although Oxf is nowadays used in official university publications.

May i have the name list of Indian graduates since 1945. TQ
More

1214    The University of Oxford receives its charter.

1811    Percy Bysshe Shelley is expelled from the University of Oxford for publishing the pamphlet ''The Necessity of Atheism''.

1871    The University Tests Act allows students to enter the Universities of Oxford, Cambridge and Durham without religious tests, except for courses in theology.