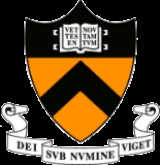 Overview
Princeton University is a private
Private university
Private universities are universities not operated by governments, although many receive public subsidies, especially in the form of tax breaks and public student loans and grants. Depending on their location, private universities may be subject to government regulation. Private universities are...
research university located in Princeton
Princeton, New Jersey
Princeton is a community located in Mercer County, New Jersey, United States. It is best known as the location of Princeton University, which has been sited in the community since 1756...
, New Jersey
New Jersey
New Jersey is a state in the Northeastern and Middle Atlantic regions of the United States. , its population was 8,791,894. It is bordered on the north and east by the state of New York, on the southeast and south by the Atlantic Ocean, on the west by Pennsylvania and on the southwest by Delaware...
, United States
United States
The United States of America is a federal constitutional republic comprising fifty states and a federal district...
. The school is one of the eight universities of the Ivy League
Ivy League
The Ivy League is an athletic conference comprising eight private institutions of higher education in the Northeastern United States. The conference name is also commonly used to refer to those eight schools as a group...
, and is one of the nine Colonial Colleges
Colonial colleges
The Colonial Colleges are nine institutions of higher education chartered in the American Colonies before the United States of America became a sovereign nation after the American Revolution. These nine have long been considered together, notably in the survey of their origins in the 1907 The...
founded before the American Revolution
American Revolution
The American Revolution was the political upheaval during the last half of the 18th century in which thirteen colonies in North America joined together to break free from the British Empire, combining to become the United States of America...
.

Michael Jordan is the man who may have stepped away from the game, but his legacy will always live on in the record books and with his shoes. The s...
More
x