The bridge is situated between Hisarüstü (Europe
Europe
Europe is, by convention, one of the world's seven continents. Comprising the westernmost peninsula of Eurasia, Europe is generally 'divided' from Asia to its east by the watershed divides of the Ural and Caucasus Mountains, the Ural River, the Caspian and Black Seas, and the waterways connecting...
an side) and Kavacık (Asia
Asia
Asia is the world's largest and most populous continent, located primarily in the eastern and northern hemispheres. It covers 8.7% of the Earth's total surface area and with approximately 3.879 billion people, it hosts 60% of the world's current human population...
n side). It is a gravity-anchored suspension bridge
Suspension bridge
A suspension bridge is a type of bridge in which the deck is hung below suspension cables on vertical suspenders. Outside Tibet and Bhutan, where the first examples of this type of bridge were built in the 15th century, this type of bridge dates from the early 19th century...
with steel pylons and vertical hangers. The aerodynamic deck is hanging on double vertical steel cables. It is 1,510 m long with a deck width of 39 m. The distance between the towers (main span) is 1,090 m and their height over road level is 105 m. The clearance of the bridge from sea level is 64 m. Fatih Sultan Mehmet Bridge had the 6th longest suspension bridge span in the world when it was completed in 1988. At present, it has the 15th longest suspension bridge span in the world.

The bridge was designed by Freeman Fox & Partners and BOTEK Bosphorus Technical Consulting Corp., who had previously also designed the Bosphorus Bridge
Bosphorus Bridge
The Bosphorus Bridge, also called the First Bosphorus Bridge is one of the two bridges in Istanbul, Turkey, spanning the Bosphorus strait and thus connecting Europe and Asia The bridge is located between Ortaköy and Beylerbeyi The Bosphorus Bridge, also called the First Bosphorus Bridge is...
. An international consortium
Consortium
A consortium is an association of two or more individuals, companies, organizations or governments with the objective of participating in a common activity or pooling their resources for achieving a common goal....
of three Japan
Japan
Japan is an island nation in East Asia. Located in the Pacific Ocean, it lies to the east of the Sea of Japan, China, North Korea, South Korea and Russia, stretching from the Sea of Okhotsk in the north to the East China Sea and Taiwan in the south...
ese companies (including IHI Corporation and Mitsubishi Heavy Industries
Mitsubishi Heavy Industries
, or MHI, is a Japanese company. It is one of the core companies of Mitsubishi Group.-History:In 1870 Yataro Iwasaki, the founder of Mitsubishi took a lease of Government-owned Nagasaki Shipyard. He named it Nagasaki Shipyard & Machinery Works, and started the shipbuilding business on a full scale...
), one Italian
Italy
Italy , officially the Italian Republic languages]] under the European Charter for Regional or Minority Languages. In each of these, Italy's official name is as follows:;;;;;;;;), is a unitary parliamentary republic in South-Central Europe. To the north it borders France, Switzerland, Austria and...
and one Turkish
Turkey
Turkey , known officially as the Republic of Turkey , is a Eurasian country located in Western Asia and in East Thrace in Southeastern Europe...
company (STFA) carried out the construction works. The bridge was completed on July 3, 1988 and opened by Prime Minister
Prime minister
A prime minister is the most senior minister of cabinet in the executive branch of government in a parliamentary system. In many systems, the prime minister selects and may dismiss other members of the cabinet, and allocates posts to members within the government. In most systems, the prime...
Turgut Özal
Turgut Özal
Halil Turgut Özal was Prime Minister of Turkey and President of Turkey . As Prime Minister, he transformed the economy of Turkey by paving the way for the privatization of many state enterprises.-Early life and career:...
who drove his official car by himself as the first to pass. The cost of the bridge amounted to USD 130 million. 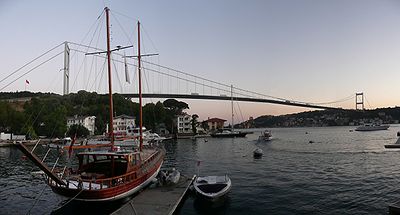 The bridge is on the Trans-European Motorway between Edirne
Edirne
Edirne is a city in Eastern Thrace, the northwestern part of Turkey, close to the borders with Greece and Bulgaria. Edirne served as the capital city of the Ottoman Empire from 1365 to 1453, before Constantinople became the empire's new capital. At present, Edirne is the capital of the Edirne...
and Ankara
Ankara
Ankara is the capital of Turkey and the country's second largest city after Istanbul. The city has a mean elevation of , and as of 2010 the metropolitan area in the entire Ankara Province had a population of 4.4 million....
. The highway bridge has four lane
Lane
A lane is a part of the roadway within a road marked out for use by a single line of vehicles in such a way as to control and guide drivers for the purpose of reducing traffic conflicts. Most public roads have at least two lanes, one for traffic in each direction, separated by Lane markings...
s for vehicular traffic
Traffic
Traffic on roads may consist of pedestrians, ridden or herded animals, vehicles, streetcars and other conveyances, either singly or together, while using the public way for purposes of travel...
plus one emergency lane in each direction. On weekday mornings, commuter traffic flows mostly westbound to the European part, so five of the eight lanes run westbound and only three eastbound. Conversely, on weekday evenings, five lanes are dedicated to eastbound traffic and three lanes only to westbound. No pedestrians are allowed to use the bridge. Nowadays, around 150,000 vehicles are passing daily in both directions, almost 65% being automobile
Automobile
An automobile, autocar, motor car or car is a wheeled motor vehicle used for transporting passengers, which also carries its own engine or motor...
s.

The bridge is a toll bridge
Toll bridge
A toll bridge is a bridge over which traffic may pass upon payment of a toll, or fee.- History :The practice of collecting tolls on bridges probably harks back to the days of ferry crossings where people paid a fee to be ferried across stretches of water. As boats became impractical to carry large...
, and a toll plaza with toll booths is situated before the bridge on the European side. Toll is paid for one way passing from the European side to the Asian side. Since 1999, some of the toll booths, located to the far left as motorists approach them, are unmanned and equipped only with remote payment system
Open road tolling
Open road tolling or free-flow tolling is the collection of tolls on toll roads without the use of toll booths. An electronic toll collection system is usually used instead. The major advantage to ORT is that users are able to drive through the toll plaza at highway speeds without having to slow...
(Turkish: OGS) in order to enable fast through passing. In addition to OGS, another toll pay system
Electronic toll collection
Electronic toll collection , an adaptation of military "identification friend or foe" technology, aims to eliminate the delay on toll roads by collecting tolls electronically. It is thus a technological implementation of a road pricing concept...
with special contactless smart cards (Turkish: KGS) was put in service for use at specific toll booths in 2005.


Usage in Media and Books