Encyclopedia
Open road tolling or free-flow tolling is the collection of tolls on toll road
Toll road
A toll road is a privately or publicly built road for which a driver pays a toll for use. Structures for which tolls are charged include toll bridges and toll tunnels. Non-toll roads are financed using other sources of revenue, most typically fuel tax or general tax funds...
s without the use of toll booth
Toll house
A tollhouse or toll house is a building with accommodation for a toll collector, beside a tollgate on a toll road or canal. Many tollhouses were built by turnpike trusts in England, Wales and Scotland during the 18th and early 19th centuries...
s. An electronic toll collection
Electronic toll collection
Electronic toll collection , an adaptation of military "identification friend or foe" technology, aims to eliminate the delay on toll roads by collecting tolls electronically. It is thus a technological implementation of a road pricing concept...
system is usually used instead. The major advantage to ORT is that users are able to drive through the toll plaza at highway speeds without having to slow down to pay the toll. In some installations, ORT may also reduce congestion at the plazas by allowing more vehicles per hour/per lane. The disadvantage to ORT is the possibility of "leakage"; that is, "violators" who do not pay. Leakage may either be written off as an expense by the toll operator, or offset in part or whole by fees and fines collected against the violators. 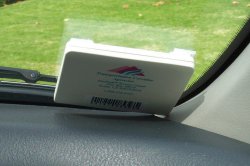 In 1959, Nobel Economics Prize winner William Vickrey
William Vickrey
William Spencer Vickrey was a Canadian professor of economics and Nobel Laureate. Vickrey was awarded the Nobel Memorial Prize in Economics with James Mirrlees for their research into the economic theory of incentives under asymmetric information...
was the first to propose a system of electronic tolling for the Washington metropolitan area. He proposed that each car would be equipped with a transponder. “The transponder’s personalised signal would be picked up when the car passed through an intersection, and then relayed to a central computer which would calculate the charge according to the intersection and the time of day and add it to the car’s bill”

Norway has been the world's pioneer in the widespread implementation of this technology. ETC was first introduced in Bergen
Bergen
Bergen is the second largest city in Norway with a population of as of , . Bergen is the administrative centre of Hordaland county. Greater Bergen or Bergen Metropolitan Area as defined by Statistics Norway, has a population of as of , ....
, in 1986, operating together with traditional tollbooths. The first major deployment of an RFID electronic toll collection system in the United States was the TollTag
TollTag
TollTag is the electronic toll collection system used by the North Texas Tollway Authority in the Dallas / Fort Worth metro area. It was North America’s first electronic toll collection system when it was installed on the Dallas North Tollway in 1989. There are currently over 2,000,000 TollTags in...
system used on the Dallas North Tollway
Dallas North Tollway
The Dallas North Tollway is a controlled-access toll road operated by the North Texas Tollway Authority , which runs from Interstate 35E near downtown Dallas, Texas , to U.S...
, implemented in 1989 by Amtech
Roper Industries
Roper Industries is a diversified industrial company that produces engineered products for global niche markets. The company is headquartered in Sarasota, Florida.Roper provides a wide range of products and services to customers in over 100 countries...
. The first fully automated toll highway in the world, Ontario Highway 407, opened in Canada on 7 June, 1997. The highway manages to achieves this automation through the uses both RFID technology along with automatic number plate recognition
Automatic number plate recognition
Automatic number plate recognition is a mass surveillance method that uses optical character recognition on images to read the license plates on vehicles. They can use existing closed-circuit television or road-rule enforcement cameras, or ones specifically designed for the task...
. 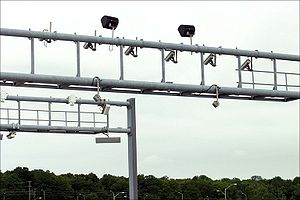 Collection of tolls on open toll roads is usually conducted through either the use of transponders or automatic plate recognition. While rarely used as the primary vehicle identification method, automatic number plate recognition is used on a number of different highway systems. Both methods aims to eliminate the delay on toll roads by collecting tolls electronically by electronically debiting the accounts of registered car owners without requiring them to stop.

Transponders are a receiver-transmitter that will generate a reply signal upon proper electronic interrogation. Transponders are an adaptation of military identification friend or foe
Identification friend or foe
In telecommunications, identification, friend or foe is an identification system designed for command and control. It is a system that enables military and national interrogation systems to identify aircraft, vehicles, or forces as friendly and to determine their bearing and range from the...
technology. Most current AVI systems rely on radio-frequency identification, where an antenna at the toll gate communicates with a transponder on the vehicle via dedicated short-range communications (DSRC). RFID tags have proved to have excellent accuracy, and can be read at highway speeds. Some early AVI systems used barcodes affixed to each vehicle, to be read optically at the toll booth. Optical systems proved to have poor reading reliability, especially when faced with inclement weather and dirty vehicles.

Automatic number plate recognition (ANPR) is a system that uses optical character recognition on images to read the license plates on vehicles. While the technology is most commonly used by law enforcement for traffic enforcement cameras or for cataloging the movements of traffic or individuals, ANPR has also been used as a method of electronic toll collection. Typically, a system of cameras are located at each junction and detect the transponders, logging the unique identity of each vehicle in much the same way as the ANPR system does. The use of ANPR reduces fraud related to non-payment, makes charging effective, and reduces the amount of required manpower to enforce the toll road.