A toll bridge is a bridge
Bridge
A bridge is a structure built to span physical obstacles such as a body of water, valley, or road, for the purpose of providing passage over the obstacle...
over which traffic
Traffic
Traffic on roads may consist of pedestrians, ridden or herded animals, vehicles, streetcars and other conveyances, either singly or together, while using the public way for purposes of travel...
may pass upon payment of a toll, or fee.

The practice of collecting tolls on bridges probably harks back to the days of ferry
Ferry
A ferry is a form of transportation, usually a boat, but sometimes a ship, used to carry primarily passengers, and sometimes vehicles and cargo as well, across a body of water. Most ferries operate on regular, frequent, return services...
crossings where people paid a fee to be ferried across stretches of water. As boats became impractical to carry large loads, ferry operators looked for new sources of revenue. Having built a bridge, they hoped to recoup their investment by charging tolls for people, animals, vehicles, and goods to cross it.

The original London Bridge
London Bridge
London Bridge is a bridge over the River Thames, connecting the City of London and Southwark, in central London. Situated between Cannon Street Railway Bridge and Tower Bridge, it forms the western end of the Pool of London...
across the river Thames opened as a toll bridge, but an accumulation of funds by the charitable trust that operated the bridge (Bridge House Estates
Bridge House Estates
The Bridge House Estates are a charitable trust, established in 1282 by the City of London Corporation in the English city of London. It was originally established to maintain London Bridge and, subsequently, other bridges. Funded by bridge tolls and charitable donations, the trust acquired an...
) saw that the charges were dropped. Using interest on its capital assets, the trust now owns and runs all seven central London bridges at no cost to taxpayers or users.

In the United States, private ownership of toll bridges peaked in the mid-19th century, and by the turn of the 20th century most toll bridges were taken over by state highway departments. In some instances, a quasi-governmental authority was formed, and toll revenue bond
Toll revenue bond
A toll revenue bond is a financial promissory note usually issued to generate funds for the construction and/or operation of a public accommodation such as an expressway, bridge, or tunnel...
s were issued to raise funds for construction and/or operation of the facility.

In some instances, tolls have been removed after retirement of the toll revenue bond
Toll revenue bond
A toll revenue bond is a financial promissory note usually issued to generate funds for the construction and/or operation of a public accommodation such as an expressway, bridge, or tunnel...
s issued to raise funds for construction and/or operation of the facility. Examples include the Robert E. Lee Memorial Bridge
Robert E. Lee Memorial Bridge
The Robert E. Lee Memorial Bridge in Richmond, Virginia carries U.S. Route 1 and U.S. Route 301 across the James River at the fall line.The city acquired the original bridge from Richmond Bridge Corp in 1933, and it was named the James River Bridge but was later renamed for the Confederate general....
in Richmond, Virginia
Richmond, Virginia
Richmond is the capital of the Commonwealth of Virginia, in the United States. It is an independent city and not part of any county. Richmond is the center of the Richmond Metropolitan Statistical Area and the Greater Richmond area...
which carries U.S. Route 1
U.S. Route 1
U.S. Route 1 is a major north–south U.S. Highway that serves the East Coast of the United States. It runs 2,377 miles from Fort Kent, Maine at the Canadian border south to Key West, Florida. U.S. 1 generally parallels Interstate 95, though it is significantly farther west between...
across the James River
James River (Virginia)
The James River is a river in the U.S. state of Virginia. It is long, extending to if one includes the Jackson River, the longer of its two source tributaries. The James River drains a catchment comprising . The watershed includes about 4% open water and an area with a population of 2.5 million...
, and the 4.5-mile long James River Bridge
James River Bridge
The James River Bridge is a four-lane divided highway lift bridge across the James River in the U.S. state of Virginia. Owned and operated by the Virginia Department of Transportation, it carries U.S. Route 17, U.S. Route 258, and State Route 32 across the river near its mouth at Hampton Roads...
80 miles downstream which carries U.S. Highway 17 across the river of the same name near its mouth at Hampton Roads
Hampton Roads
Hampton Roads is the name for both a body of water and the Norfolk–Virginia Beach metropolitan area which surrounds it in southeastern Virginia, United States...
. In other cases, especially major facilities such as the Chesapeake Bay Bridge
Chesapeake Bay Bridge
The Chesapeake Bay Bridge is a major dual-span bridge in the U.S. state of Maryland. Spanning the Chesapeake Bay, it connects the state's rural Eastern Shore region with the more urban Western Shore. The original span opened in 1952 and, at the time, with a length of , it was the world's longest...
near Annapolis, Maryland
Annapolis, Maryland
Annapolis is the capital of the U.S. state of Maryland, as well as the county seat of Anne Arundel County. It had a population of 38,394 at the 2010 census and is situated on the Chesapeake Bay at the mouth of the Severn River, south of Baltimore and about east of Washington, D.C. Annapolis is...
, and the George Washington Bridge
George Washington Bridge
The George Washington Bridge is a suspension bridge spanning the Hudson River, connecting the Washington Heights neighborhood in the borough of Manhattan in New York City to Fort Lee, Bergen County, New Jersey. Interstate 95 and U.S. Route 1/9 cross the river via the bridge. U.S...
over Hudson River
Hudson River
The Hudson is a river that flows from north to south through eastern New York. The highest official source is at Lake Tear of the Clouds, on the slopes of Mount Marcy in the Adirondack Mountains. The river itself officially begins in Henderson Lake in Newcomb, New York...
between New York City
New York City
New York is the most populous city in the United States and the center of the New York Metropolitan Area, one of the most populous metropolitan areas in the world. New York exerts a significant impact upon global commerce, finance, media, art, fashion, research, technology, education, and...
and New Jersey
New Jersey
New Jersey is a state in the Northeastern and Middle Atlantic regions of the United States. , its population was 8,791,894. It is bordered on the north and east by the state of New York, on the southeast and south by the Atlantic Ocean, on the west by Pennsylvania and on the southwest by Delaware...
, the continued collection of tolls provides a dedicated source of funds for ongoing maintenance and improvements.
Sometimes citizens revolt against toll plazas, as was the case in Jacksonville, Florida
Jacksonville, Florida
Jacksonville is the largest city in the U.S. state of Florida in terms of both population and land area, and the largest city by area in the contiguous United States. It is the county seat of Duval County, with which the city government consolidated in 1968...
. Tolls were in place on four bridges crossing the St. Johns River, including I-95. These tolls paid for the respective bridges as well as many other highway projects. As Jacksonvile continued to grow, the tolls created bottlenecks on the roadway. In 1988, Jacksonville voters chose to eliminate all the toll booths and replace the revenue with a ½ cent sales tax increase. In 1989, the toll booths were removed, 36 years after the first toll booth went up.

In Scotland
Scotland
Scotland is a country that is part of the United Kingdom. Occupying the northern third of the island of Great Britain, it shares a border with England to the south and is bounded by the North Sea to the east, the Atlantic Ocean to the north and west, and the North Channel and Irish Sea to the...
, the Scottish Parliament purchased the Skye Bridge
Skye Bridge
The Skye Bridge is a road bridge over Loch Alsh, connecting mainland Highland with the Isle of Skye, Scotland. It forms part of the A87. The bridge is located at around , with one pillar standing on the island of Eilean Bàn....
from its owners in late 2004, ending the requirement to pay an unpopular expensive toll to cross to Skye from the mainland.

It has become increasingly common for a toll bridge to only charge a fee in one direction. This helps reduce the traffic congestion
Traffic congestion
Traffic congestion is a condition on road networks that occurs as use increases, and is characterized by slower speeds, longer trip times, and increased vehicular queueing. The most common example is the physical use of roads by vehicles. When traffic demand is great enough that the interaction...
in the other direction, and generally does not significantly reduce revenue, especially when those traveling the one direction are forced to come back over the same or a different toll bridge.

A practice known as shunpiking
Shunpiking
The term shunpiking comes from the word shun, meaning "to avoid", and pike, a term referring to turnpikes, which are roads that require payment of a toll to travel on them...
evolved which entails finding another route for the specific purpose of avoiding payment of tolls.

In some situations where the tolls were increased or felt to be unreasonably high, informal shunpiking by individuals escalated into a form of boycott
Boycott
A boycott is an act of voluntarily abstaining from using, buying, or dealing with a person, organization, or country as an expression of protest, usually for political reasons...
by regular users, with the goal of applying the financial stress of lost toll revenue to the authority determining the levy.
One such example of shunpiking as a form of boycott occurred at the James River Bridge
James River Bridge
The James River Bridge is a four-lane divided highway lift bridge across the James River in the U.S. state of Virginia. Owned and operated by the Virginia Department of Transportation, it carries U.S. Route 17, U.S. Route 258, and State Route 32 across the river near its mouth at Hampton Roads...
in eastern Virginia
Virginia
The Commonwealth of Virginia , is a U.S. state on the Atlantic Coast of the Southern United States. Virginia is nicknamed the "Old Dominion" and sometimes the "Mother of Presidents" after the eight U.S. presidents born there...
. After years of lower than anticipated revenues on the narrow privately funded structure built in 1928, the state of Virginia finally purchased the facility in 1949 and increased the tolls in 1955 without visibly improving the roadway, with the notable exception of a new toll plaza.

The increased toll rates incensed the public and business users alike. In a well-publicized example of shunpiking
Shunpiking
The term shunpiking comes from the word shun, meaning "to avoid", and pike, a term referring to turnpikes, which are roads that require payment of a toll to travel on them...
, Joseph W. Luter Jr., head of Smithfield Packing Company
Smithfield Packing Company
Smithfield Packing Company was founded in 1936 by Joseph W. Luter and his son Joseph W. Luter, Jr., in the Town of Smithfield along the Pagan River, a tributary of the James River in Isle of Wight County, Virginia, USA, to produce Smithfield hams...
, the producer of world-famous Smithfield Hams
Smithfield ham
Smithfield ham is a specific form of the country ham, a product which originated in the town of Smithfield in Isle of Wight County in the Hampton Roads region of Virginia, USA.-Legal definition:...
, ordered his truck drivers to take a different route and cross a smaller and cheaper bridge. Tolls continued for 20 more years, and were finally removed from the old bridge in 1975 when construction began on a toll-free replacement structure. 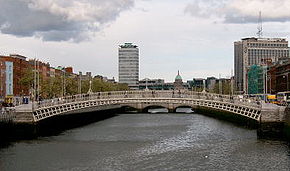