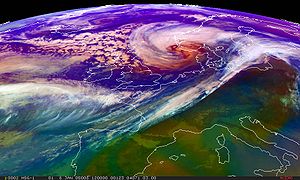 A European windstorm is a severe cyclonic
Cyclone
In meteorology, a cyclone is an area of closed, circular fluid motion rotating in the same direction as the Earth. This is usually characterized by inward spiraling winds that rotate anticlockwise in the Northern Hemisphere and clockwise in the Southern Hemisphere of the Earth. Most large-scale...
windstorm associated with areas of low atmospheric pressure
Atmospheric pressure
Atmospheric pressure is the force per unit area exerted into a surface by the weight of air above that surface in the atmosphere of Earth . In most circumstances atmospheric pressure is closely approximated by the hydrostatic pressure caused by the weight of air above the measurement point...
that track across the North Atlantic towards northwestern Europe. They are most common in the winter
Winter
Winter is the coldest season of the year in temperate climates, between autumn and spring. At the winter solstice, the days are shortest and the nights are longest, with days lengthening as the season progresses after the solstice.-Meteorology:...
months. Deep low pressure areas are relatively common over the North Atlantic, sometimes starting as nor'easter
Nor'easter
A nor'easter is a type of macro-scale storm along the East Coast of the United States and Atlantic Canada, so named because the storm travels to the northeast from the south and the winds come from the northeast, especially in the coastal areas of the Northeastern United States and Atlantic Canada...
s off the New England
New England
New England is a region in the northeastern corner of the United States consisting of the six states of Maine, New Hampshire, Vermont, Massachusetts, Rhode Island, and Connecticut...
coast, and frequently track past the north coasts of the British Isles
British Isles
The British Isles are a group of islands off the northwest coast of continental Europe that include the islands of Great Britain and Ireland and over six thousand smaller isles. There are two sovereign states located on the islands: the United Kingdom of Great Britain and Northern Ireland and...
onto the Norwegian Sea
Norwegian Sea
The Norwegian Sea is a marginal sea in the North Atlantic Ocean, northwest of Norway. It is located between the North Sea and the Greenland Sea and adjoins the North Atlantic Ocean to the west and the Barents Sea to the northeast. In the southwest, it is separated from the Atlantic Ocean by a...
. However, when they veer south they can affect almost any country in Europe. Commonly-affected countries include Britain
United Kingdom
The United Kingdom of Great Britain and Northern IrelandIn the United Kingdom and Dependencies, other languages have been officially recognised as legitimate autochthonous languages under the European Charter for Regional or Minority Languages...
, Ireland
Ireland
Ireland is an island to the northwest of continental Europe. It is the third-largest island in Europe and the twentieth-largest island on Earth...
, Norway
Norway
Norway , officially the Kingdom of Norway, is a Nordic unitary constitutional monarchy whose territory comprises the western portion of the Scandinavian Peninsula, Jan Mayen, and the Arctic archipelago of Svalbard and Bouvet Island. Norway has a total area of and a population of about 4.9 million...
, the Faroe Islands
Faroe Islands
The Faroe Islands are an island group situated between the Norwegian Sea and the North Atlantic Ocean, approximately halfway between Scotland and Iceland. The Faroe Islands are a self-governing territory within the Kingdom of Denmark, along with Denmark proper and Greenland...
and Iceland
Iceland
Iceland , described as the Republic of Iceland, is a Nordic and European island country in the North Atlantic Ocean, on the Mid-Atlantic Ridge. Iceland also refers to the main island of the country, which contains almost all the population and almost all the land area. The country has a population...
, but any country in central, northern and especially western Europe
Western Europe
Western Europe is a loose term for the collection of countries in the western most region of the European continents, though this definition is context-dependent and carries cultural and political connotations. One definition describes Western Europe as a geographic entity—the region lying in the...
is occasionally struck by such a storm system.

Up to the second half of the 19th century, European windstorms were named after the person who spotted it. Usually, they would be named either by the year, the date, the Saint's day of their occurrence or any other way that made them commonly known. This has meant that the same storm could be named differently from one country to another.

Inspired by the practice of the U.S. National Weather Service
National Weather Service
The National Weather Service , once known as the Weather Bureau, is one of the six scientific agencies that make up the National Oceanic and Atmospheric Administration of the United States government...
to assign names to hurricanes and typhoons
Tropical cyclone
A tropical cyclone is a storm system characterized by a large low-pressure center and numerous thunderstorms that produce strong winds and heavy rain. Tropical cyclones strengthen when water evaporated from the ocean is released as the saturated air rises, resulting in condensation of water vapor...
, a student at the Free University of Berlin
Free University of Berlin
Freie Universität Berlin is one of the leading and most prestigious research universities in Germany and continental Europe. It distinguishes itself through its modern and international character. It is the largest of the four universities in Berlin. Research at the university is focused on the...
(FU), Karla Wege, suggested in 1954 that all high- and low-pressure systems affecting Europe should be given names in order to make tracking the systems simpler. Lows were given female names and highs male names, and the names of notable extratropical cyclone
Extratropical cyclone
Extratropical cyclones, sometimes called mid-latitude cyclones or wave cyclones, are a group of cyclones defined as synoptic scale low pressure weather systems that occur in the middle latitudes of the Earth having neither tropical nor polar characteristics, and are connected with fronts and...
s were retired after each event. This practice was soon adopted by the German media.

In 1998 the system changed to alternating male and female names for highs and lows each year. In November 2002 the "Adopt-a-Vortex" scheme was started, which allows members of the public to buy names that will then be assigned to storms during each year. The money raised by this is used by the meteorology department to maintain weather observations at the Free University.

Several European languages use the word Ouragan or cognates thereof (Huragan, Orcan, Orkan) to indicate particularly strong European windstorms. This is not in reference to the tropical cyclone of the same name but to the Hurricane strength of the wind in the Beaufort scale
Beaufort scale
The Beaufort Scale is an empirical measure that relates wind speed to observed conditions at sea or on land. Its full name is the Beaufort Wind Force Scale.-History:...
(winds ≥ 118 km/h or ≥ 73 mph).

Temporal clustering of windstorm events has also been noted, with 8 consecutive storms hitting Europe during the winter of 1989/90. Lothar and Martin in 1999 were separated only by 36 hours. Kyrill in 2007 following only four days after Hanno, and 2008 with Johanna, Kirsten and Emma. In 2011, Xaver (Berit) moved across Northern Europe
Europe
Europe is, by convention, one of the world's seven continents. Comprising the westernmost peninsula of Eurasia, Europe is generally 'divided' from Asia to its east by the watershed divides of the Ural and Caucasus Mountains, the Ural River, the Caspian and Black Seas, and the waterways connecting...
and just days later another storm, called Yoda, hit the same area.


Severe European windstorms from between 2000 and 2009