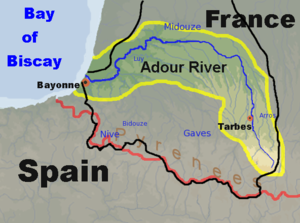 The Adour is a river
River
A river is a natural watercourse, usually freshwater, flowing towards an ocean, a lake, a sea, or another river. In a few cases, a river simply flows into the ground or dries up completely before reaching another body of water. Small rivers may also be called by several other names, including...
in southwestern France
France
The French Republic , The French Republic , The French Republic , (commonly known as France , is a unitary semi-presidential republic in Western Europe with several overseas territories and islands located on other continents and in the Indian, Pacific, and Atlantic oceans. Metropolitan France...
. It rises in High-Bigorre
Bigorre
Bigorre is region in southwest France, historically an independent county and later a French province, located in the upper watershed of the Adour, on the northern slopes of the Pyrenees, part of the larger region known as Gascony...
(Pyrenees
Pyrenees
The Pyrenees is a range of mountains in southwest Europe that forms a natural border between France and Spain...
), at the Col du Tourmalet
Col du Tourmalet
Col du Tourmalet is the highest road in the central Pyrenees in the department of Hautes-Pyrénées in France. Sainte-Marie-de-Campan is at the foot on the eastern side and the ski station La Mongie two-thirds of the way up. Luz-Saint-Sauveur is at the bottom of the western side.Tourmalet is also a...
, and flows into the Atlantic Ocean
Atlantic Ocean
The Atlantic Ocean is the second-largest of the world's oceanic divisions. With a total area of about , it covers approximately 20% of the Earth's surface and about 26% of its water surface area...
(Bay of Biscay
Bay of Biscay
The Bay of Biscay is a gulf of the northeast Atlantic Ocean located south of the Celtic Sea. It lies along the western coast of France from Brest south to the Spanish border, and the northern coast of Spain west to Cape Ortegal, and is named in English after the province of Biscay, in the Spanish...
) near Bayonne
Bayonne
Bayonne is a city and commune in south-western France at the confluence of the Nive and Adour rivers, in the Pyrénées-Atlantiques department, of which it is a sub-prefecture...
. It is 324 kilometres (201.3 mi) long, of which the uppermost 15 kilometres (9.3 mi) as the Adour du Tourmalet. At its final stretch, i.e. on its way through Bayonne and a short extent upstream, the river draws the borderline between the Northern Basque Country
Northern Basque Country
The French Basque Country or Northern Basque Country situated within the western part of the French department of the Pyrénées-Atlantiques constitutes the north-eastern part of the Basque Country....
and Landes regions.


Places along the river

Départements and towns along the river include: