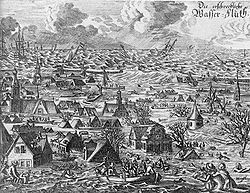 The Burchardi Flood hit Schleswig-Holstein
Schleswig-Holstein
Schleswig-Holstein is the northernmost of the sixteen states of Germany, comprising most of the historical duchy of Holstein and the southern part of the former Duchy of Schleswig...
during a period of economic weakness. In 1603 a plague epidemic which took the lives of numerous people spread across the land. The flooding occurred moreover during the Thirty Years' War
Thirty Years' War
The Thirty Years' War was fought primarily in what is now Germany, and at various points involved most countries in Europe. It was one of the most destructive conflicts in European history....
, which also did not spare Schleswig-Holstein. Fighting had occurred between locals and the troops of Frederick III, Duke of Holstein-Gottorp
Frederick III, Duke of Holstein-Gottorp
Frederick III of Holstein-Gottorp was a Duke of Holstein-Gottorp.He was the elder son of Duke Johann Adolf of Holstein-Gottorp and Augusta of Denmark. His mother was a daughter of King Frederick II of Denmark....
, especially on Strand Island. The people of Strand were resisting changes to their old defence treaties and the forced accommodation of troops. Supported by a Danish expeditionary fleet, they succeeded in repulsing first an imperial army and later the duke's men, but were eventually defeated in 1629. The island and subsequently also the means of coastal protection
Coastal management
In some jurisdictions the terms sea defense and coastal protection are used to mean, respectively, defense against flooding and erosion...
suffered from the strife.

The Burchardi Flood was merely the last in a series of floods that hit the coastline of Schleswig-Holstein in that period. In 1625, great ice-floats had already caused major damage to the dikes
Levee
A levee, levée, dike , embankment, floodbank or stopbank is an elongated naturally occurring ridge or artificially constructed fill or wall, which regulates water levels...
. Several storm floods are reported by the chronicles during the years prior to 1634; the fact that the dikes did not hold even during summer provides evidence for their insufficient maintenance.

While the weather had been calm for weeks prior to the flood, a strong storm occurred from the east on the evening of 11 October 1634 which turned southwest during the evening and developed into a European windstorm
European windstorm
A European windstorm is a severe cyclonic windstorm associated with areas of low atmospheric pressure that track across the North Atlantic towards northwestern Europe. They are most common in the winter months...
from the northwest. The most comprehensive report is preserved from Dutch hydraulic engineer Jan Leeghwater
Jan Leeghwater
Jan Adriaanszoon Leeghwater was a Dutch architect, mill builder and hydraulic engineer.- Biography :Leeghwater was born as Jan Adriaanszoon. Only later did he adopt the name Leeghwater, from laag water or low water. It is not clear exactly how the prevalent spelling of Leeghwater's name came about...
who was tasked with land reclamation
Land reclamation
Land reclamation, usually known as reclamation, is the process to create new land from sea or riverbeds. The land reclaimed is known as reclamation ground or landfill.- Habitation :...
in a part of the Dagebüll
Dagebüll
Dagebüll is a municipality located at the west coast of Schleswig-Holstein in the Nordfriesland district, Germany. Today's Dagebüll was created in 1978 as a merger of the municipalities of Fahretoft, Juliane-Marien-Koog and Waygaard...
bay. He writes:
Leeghwater and his son fled over the dike towards a manor which was situated on higher terrain while the water had almost reached the top of the dike. At the time there were 38 persons in that manor, 20 of whom were refugees from lower lands. He continues:
The witness Peter Sax from Koldenbüttel
Koldenbüttel
Koldenbüttel is a municipality in the district of Nordfriesland, in Schleswig-Holstein, Germany.-Geography und infrastructure:...
described the scenario as follows:
In combination with half a spring tide
Tide
Tides are the rise and fall of sea levels caused by the combined effects of the gravitational forces exerted by the moon and the sun and the rotation of the Earth....
, the wind was pushing the water against the coastline with such a force that the first dike broke in the Stintebüll parish on Strand island at 10 p.m. About two hours past midnight the water had reached its peak level. Contemporary reports write of a water level on the mainland of ca. 4 metres (13 ft) above mean high tide, which is only slightly below the all-time highest flood level that was recorded at Husum during the 1976 flood with 4.11 metres (13 ft) above mean high tide.

In this night the dikes broke at several hundred locations along the North Sea coastline of Schleswig-Holstein. Estimations of fatalities range from 8,000 to 15,000. 8,000 local victims are counted by contemporary sources and from comparisons of parish register
Parish register
A parish register is a handwritten volume, normally kept in a parish church or deposited within a county record office or alternative archive repository, in which details of baptisms, marriages and burials are recorded.-History:...
s. The actual number is likely to be much higher though because according to Anton Heimreich's Nordfriesische Chronik "many alien threshers and working people had been in the land whose number could just not be accounted for with certainty."

The ambitious project by the Dukes of Gottorp to shut off the bay of Dagebüll, today's Bökingharde
Bökingharde
Bökingharde was an amt in the district of Nordfriesland, in Schleswig-Holstein, Germany. It was situated on the North Sea coast, approx. 35 km northwest of Husum. Its seat was in Risum-Lindholm...
, with one single, large dike, which had been progressing after ten years of hard work, was now finally destroyed by the flood. Fagebüll and Fahretoft which were still Halligen back then suffered great losses of land and lives. The church of Ockholm
Ockholm
Ockholm is a municipality in the district of Nordfriesland, in Schleswig-Holstein, Germany....
was destroyed and the sea dike had to be relocated landwards.

The Burchardi flood had especially severe consequences for Strand island where large parts of the land were lying below sea level. For weeks and months after the flood the water did not run off. Due to tidal currents the size of the dike breaches increased and several dike lines were eventually completely washed into the sea. This meant that a lot of arable land which had still been worked on directly after the flood had to be abandoned in later times because it could not be kept against the intruding sea. Saline sea water frequently submerged the fields of Strand so that they could no longer be used for agriculture.

On Pellworm, already in 1637 they succeeded in restoring the dikes for 1,800 hectacres of land. On Nordstrand however, the remaining farmers lived on dwelling hills like the hallig people and were hardly able to cultivate their fields. Also, despite of several orders by the Duke, they failed in restoring the dikes. According to the Nordstrand dike law, those had forfeit their right of owning land who could not secure it against the sea with dikes. Finally the Duke enforced the Frisian law of "De nich will dieken, de mutt wieken ", expropriated
Confiscation
Confiscation, from the Latin confiscatio 'joining to the fiscus, i.e. transfer to the treasury' is a legal seizure without compensation by a government or other public authority...
the locals and attracted foreign settlers with a charter
Charter
A charter is the grant of authority or rights, stating that the granter formally recognizes the prerogative of the recipient to exercise the rights specified...
that promised land and considerable privileges to investors in dikes, like the sovereignty of policing and justice. One such investor was the Dutch entrepreneur Quirinus Indervelden who managed to create the first new polder
Polder
A polder is a low-lying tract of land enclosed by embankments known as dikes, that forms an artificial hydrological entity, meaning it has no connection with outside water other than through manually-operated devices...
in 1654 with Dutch money and expert workers from Brabant
Duchy of Brabant
The Duchy of Brabant was a historical region in the Low Countries. Its territory consisted essentially of the three modern-day Belgian provinces of Flemish Brabant, Walloon Brabant and Antwerp, the Brussels-Capital Region and most of the present-day Dutch province of North Brabant.The Flag of...
. Other polders followed in 1657 and 1663. This Dutch settlement is still present today in form of an Old Catholic churchhouse
Old Catholic Church
The term Old Catholic Church is commonly used to describe a number of Ultrajectine Christian churches that originated with groups that split from the Roman Catholic Church over certain doctrines, most importantly that of Papal Infallibility...
. The Old Catholic Dutchmen had been allowed to practise their religion in Lutheran
Lutheranism
Lutheranism is a major branch of Western Christianity that identifies with the theology of Martin Luther, a German reformer. Luther's efforts to reform the theology and practice of the church launched the Protestant Reformation...
Denmark and to erect their own church. Until 1870 the preacher there used to hold the sermon in Dutch.

In the course of further land reclamation, both islands Pellworm and Nordstrand today have a total area of ca. 9,000 hectacres which is one third of old Strand island. Between the islands, the Norderhever tidal channel was formed which has gained up to 30 m of depth during the last 370 years. It has frequently been a threat to the geological foundations of Pellworm.

The people of the time could only imagine such a flood as a divine punishment from God. The evangelical enthusiast and poet Anna Ovena Hoyer
Anna Ovena Hoyer
Anna Ovena Hoyer was a writer and poet, originally German; active in Sweden from 1632...
interpreted the Burchardi Flood as the beginning of the apocalypse
Apocalypse
An Apocalypse is a disclosure of something hidden from the majority of mankind in an era dominated by falsehood and misconception, i.e. the veil to be lifted. The Apocalypse of John is the Book of Revelation, the last book of the New Testament...
.